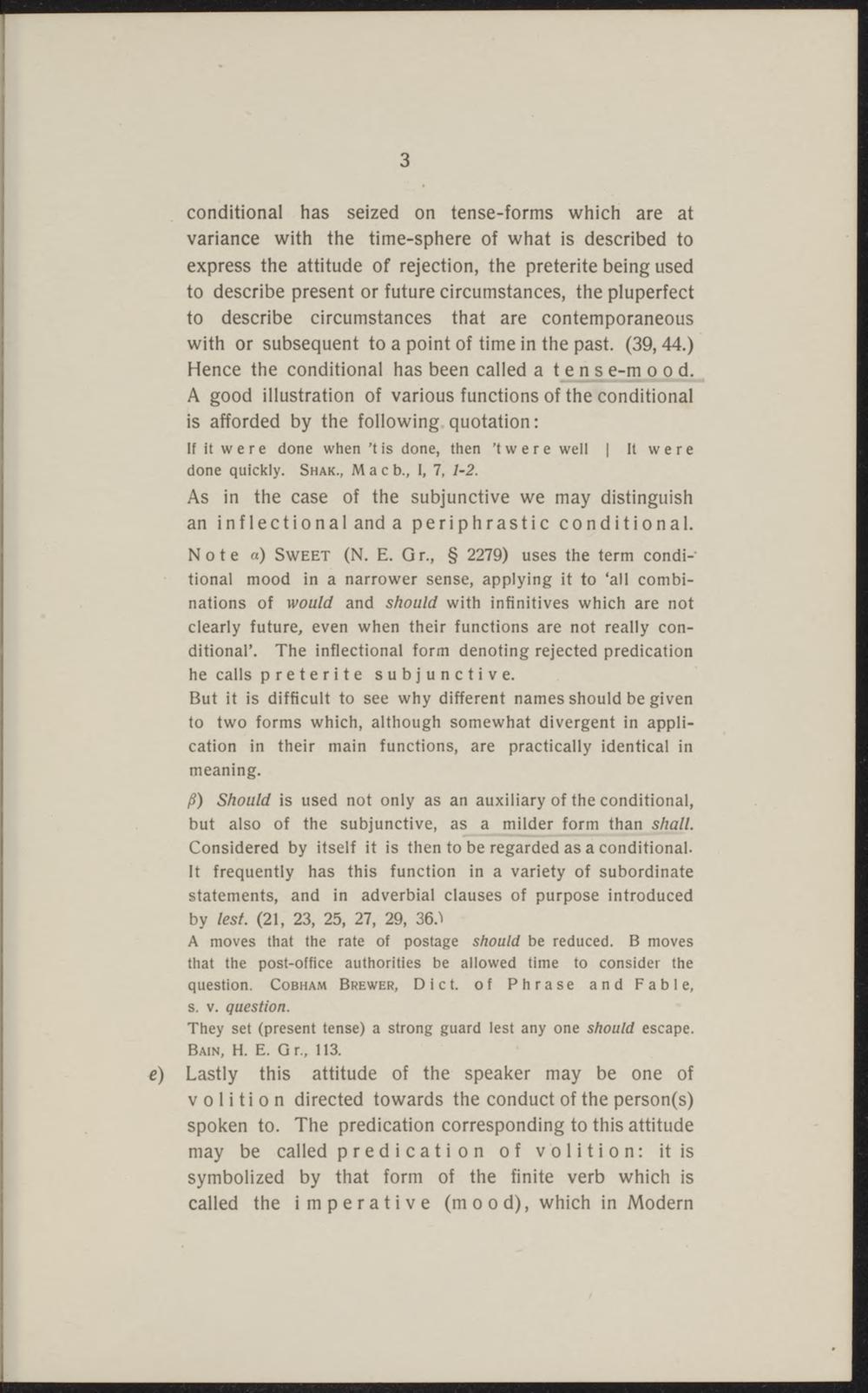 conditional has seized on tense-forms which are at variance with the time-sphere of what is described to express the attitude of rejection, the preterite being used to describe present or future circumstances, the pluperfect to describe circumstances that are contemporaneous with or subsequent to a point of time in the past. (39,44.) Hence the conditional has been called a t e n s e-m o o d. A good illustration of various functions of the conditional is afforded by the following quotation: lf it were done when 'tis done, then 'twere well | It were done quickly. Shak., Macb., I, 7, 1-2.

As in the case of the subjunctive we may distinguish an inf lectional and a periphrastic conditional.

Note a) Sweet (N. E. Gr., § 2279) uses the term conditional mood in a narrower sense, applying it to 'all combinations of would and should with infinitives which are not clearly future, even when their functions are not really conditional'. The inflectional form denoting rejected predication he calls preterite subjunctive. But it is difficult to see why different names should be given to two forms which, although somewhat divergent in application in their main functions, are practically identical in meaning.

P) Should is used not only as an auxiliary of the conditional, but also of the subjunctive, as a milder form than shall. Considered by itself it is then to be regarded as a conditional. It frequently has this function in a variety of subordinate statements, and in adverbial clauses of purpose introduced by lest. (21, 23, 25, 27, 29, 36Y>

A moves that the rate of postage should be reduced. B moves that the post-office authorities be allo wed time to consider the question. Cobham Brewer, Dict. of Phrase and Fable, s. v. question.

They set (present tense) a strong guard lest any one should escape. Bain, H. E. Gr., 113. e) Lastly this attitude of the speaker may be one of v o 1 i ti o n directed towards the conduct of the person(s) spoken to. The predication corresponding to this attitude may be called predication of volition: itis symbolized by that form of the finite verb which is called the i m p e r a t i v e (mood), which in Modern