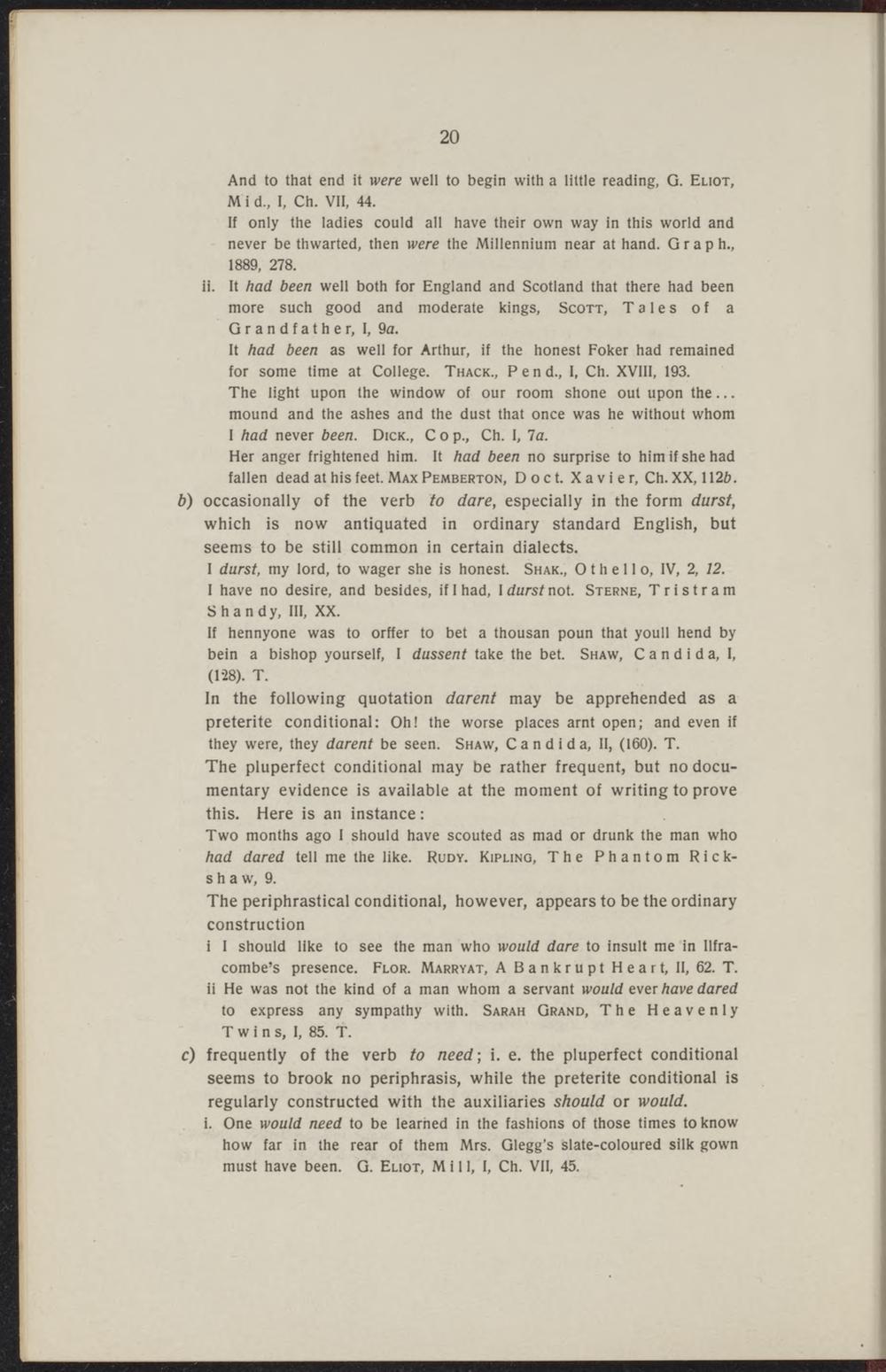 ii. It had been well both for England and Scotland that there had been more such good and moderate kings, Scott, T a I e s of a G r a n d f a t h e r, I, 9a.

It had been as well for Arthur, if the honest Foker had remained for some time at College. Thack., P e n d, I, Ch. XVIII, 193. The light upon the window of our room shone out upon the.,. mound and the ashes and the dust that once was he without whom I had never been. Dick., Cop, Ch. I, 7a.

Her anger frightened him. It had been no surprise to him if she had tallen dead at his feet. Max Pemberton, Doet Xavier, Ch. XX, 1126.

b) occasionally of the verb to dare, especially in the form durst, which is now antiquated in ordinary Standard English, but seems to be still common in certain dialects.

If hennyone was to orffer to bet a thousan poun that youil hend by bein a bishop yourself, I dussent take the bet Shaw, C a n d I d a, I, (128). T.

In the following quotation darent may be apprehended as a preterite conditional: Oh! the worse places arnt open; and even if they were, they darent be seen. Shaw, Candida, II, (160). T. The pluperfect conditional may be rather frequent, but no documentary evidence is available at the moment of writing to prove this. Here is an instance: - v. ;

Two months ago I should have scouted as mad or drunk the man who had dared teil me the like. Rudy. Kipling, The Phantom Rickshaw, 9.

The periphrastical conditional, however, appears to be the ordinary construction

i I should like to see the man who would dare to insult me'in Utiacombe's presence. Flor. Marryat, A Bankrupt Heart, II, 62. T.

ii He was not the kind of a man whom a servant would ever have dared to express any sympathy with. Sarah Grand, The Heavenly T w I n s, I, 85. T.

c) frequently of the verb to need; i. e. the pluperfect conditional seems to brook no periphrasis, while the preterite conditional is regularly constructed with the auxiliaries should or would.

i. One would need to be learhed in the fashions of those times toknow how far in the rear of them Mrs. Glegg's slate-coloured slik gown must have been. G. Eliot, M i 11, I, Ch. VII, 45.