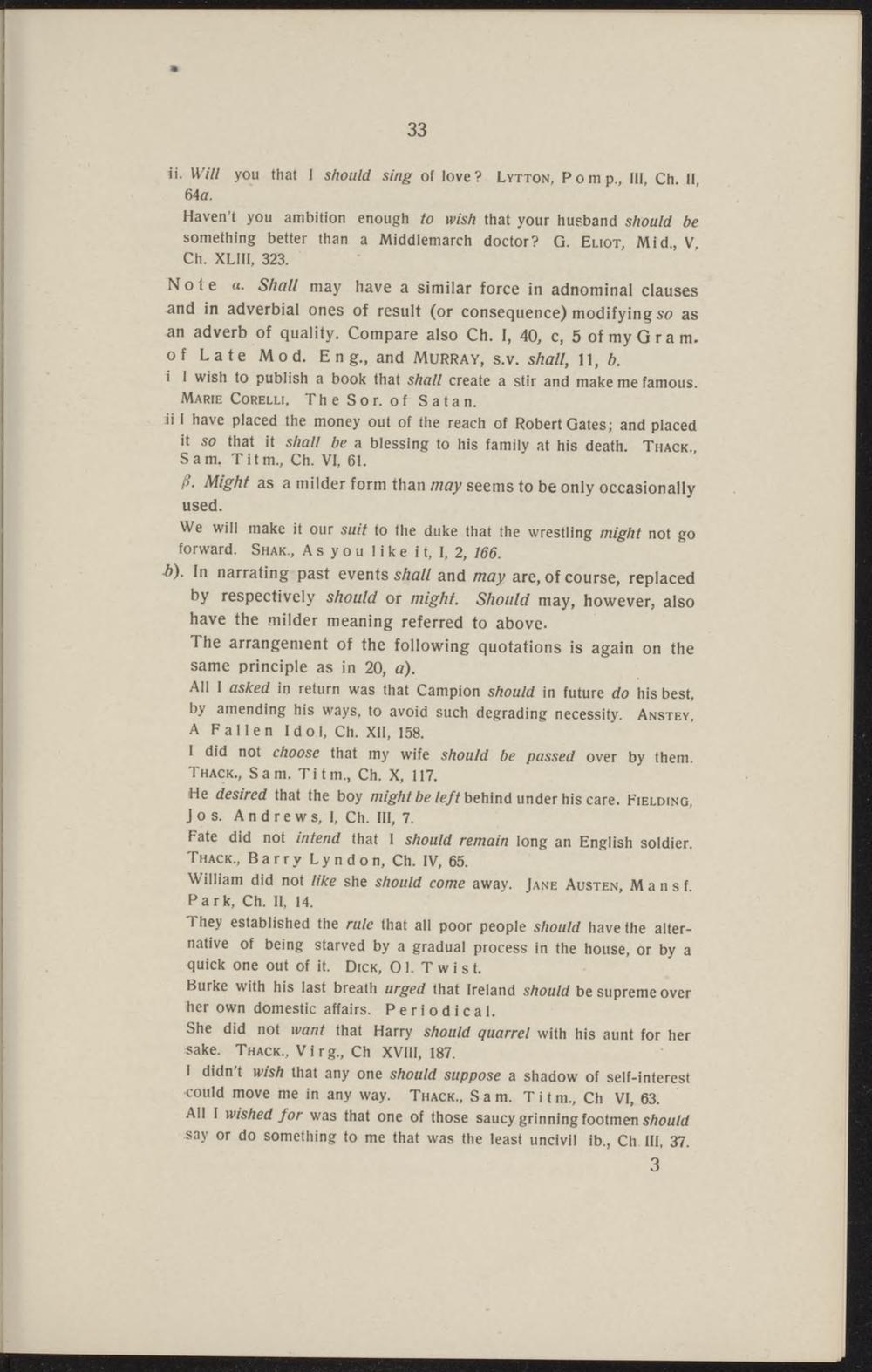 Haven't you ambition enough to wish that your husband should be something better than a Middlemarch doctor? G. Eliot, Mid, V, Ch. XLIII, 323.

Note a. Shall may have a similar force in adnominal clauses and in adverbial ones of result (or consequence) modifying so as an adverb of quality. Compare also Ch. I, 40, c, 5 of my Gram. of Late Mod. Eng, and Murray, s.v. shall, 11, b.

i I wish to publish a book that shall create a stir and make me famous. Marie Corelli. The Sor. of Satan.

ii I have placed the money out of the reach of Robert Gates; and placed it so that it shall be a blessing to his family at his death. Thack. Sam, Titm, Ch. VI, 61.

p. Mtght as a milder form than may seems to be only occasionally used.

We will make it our sart to the duke that the wrestling might not go forward. Shak, A s y o u 1 i k e i t, I, 2, 166. b). In narrating past events shall and may are, of course, replaced by respectively should or might. Should may, however, also have the milder meaning referred to above. The arrangement of the following quotations is again on the same principle as in 20, a).

All I asked in return was that Campion should in future do his best, by amending his ways, to avoid such degrading necessity. Anstey, A F all en Idol, Ch. XII, 158.

Fate did not intend that I should remain long an English soldier. Thack, Barry Lyndon, Ch. IV, 65.

They established the rule that all poor people should have the alternative of being starved by a gradual process in the house, or by a quick one out of it. Dick, 01. T w i s t.

Burke with his last brealh urged that Ireland should be suprème over her own domestic affairs. P e r i o d i c a 1.

She did not want that Harry should quarrel with his aunt for her sake. Thack, Virg, Ch XVIII, 187.

I didn't wish that any one should suppose a shadow of self-interest •could move me in any way. Thack, Sam. T11m, Ch VI, 63. All I wished for was that one of those saucy grinningfootmen should say or do something to me that was the least uncivil ib, Ch III. 37.