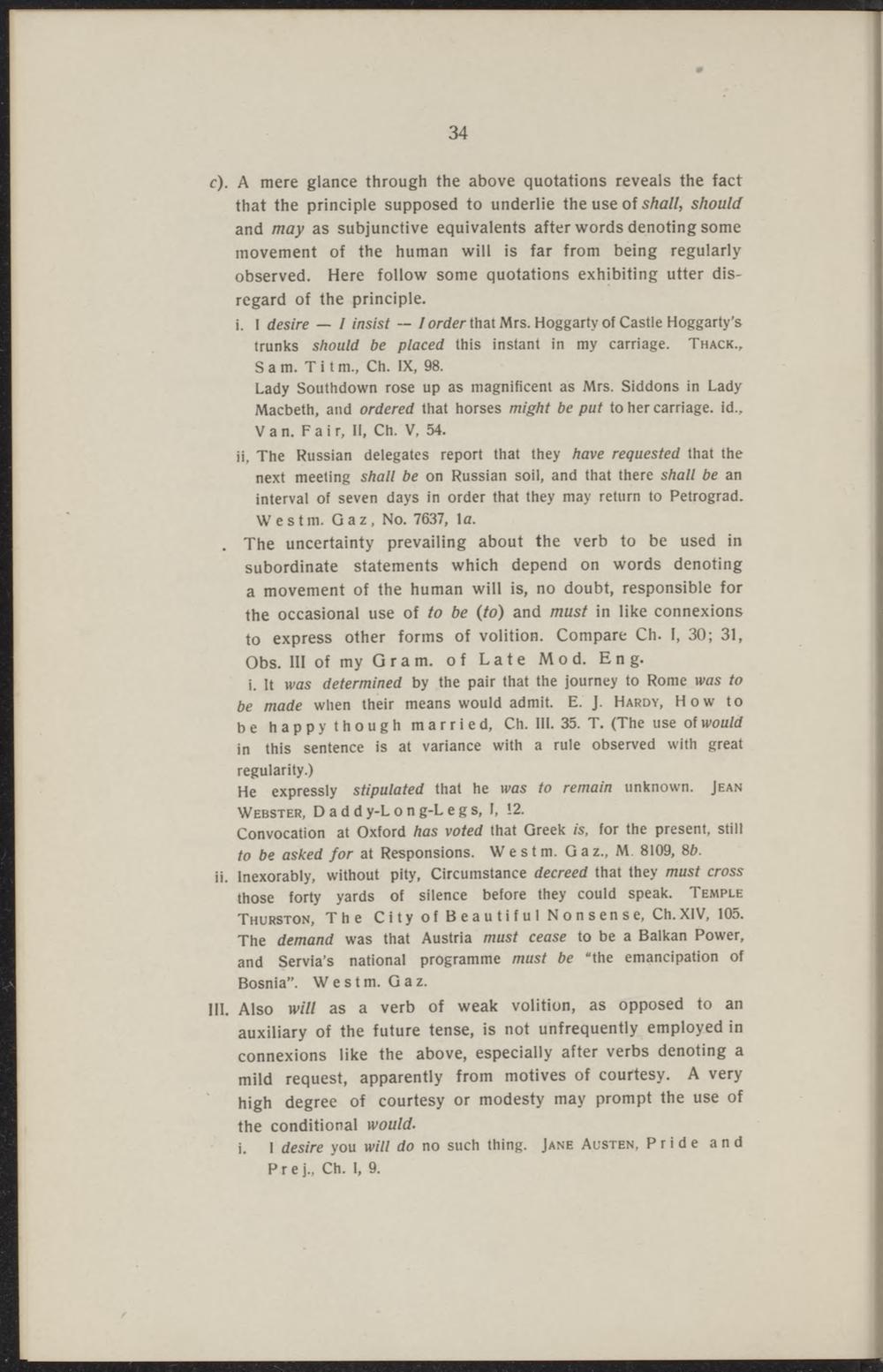 c). A mere glance through the above quotations reveals the fact that the principle supposed to underlie the use of shall, should and may as subjunctive equivalents after words denoting some movement of the human will is far from being regularly observed. Here follow some quotations exhibiting utter disregard of the principle.

Lady Southdown rose up as magnihcent as Mrs. Siddons in Lady Macbeth, and ordered that horses might be put to her carriage. id. Van. Fair, II, Ch. V, 54.

ii, The Russian deiegatcs report that they have requested that the next meeting shall be on Russian soil, and that there shall be an interval of seven days in order that they may return to Petrograd. Westm. Gaz, No. 7637, la.

. The uncertainty prevailing about the verb to be used in subordinate statements which depend on words denoting a movement of the human will is, no doubt, responsible for the occasional use of to be (to) and must in like connexions to express other forms of volition. Compare Ch. I, 30; 31, Obs. III of my Gram. of Late Mod. Eng. i. It was determined by the pair that the journey to Rome was to be made when their means would admit. E. J. Hardy, How to be happy though married, Ch. III. 35. T. (The use of would in this sentence is at variance with a rule observed with great regularity.)

Convocation at Oxford has voted that Greek is, for the present, stilt to be asked for at Responsions. Westm. Gaz, M. 8109, 8b.

ii. Inexorably, without pity, Clrcumstance decreed that they must cross those forty yards of silence before they could speak. Temple Thurston, The City of Beautiful Nonsense, Ch.XIV, 105. The demand was that Austria miisf cease to be a Balkan Power, and Servia's national programme must be 'the emancipation of Bosnia". Westm. Gaz.

III. Also will as a verb of weak volition, as opposed to an auxiliary of the future tense, is not unfrequently employed in connexions like the above, especially after verbs denoting a mild request, apparently from motlves of courtesy. A very high degree of courtesy or modesty may prompt the use of the conditional would.