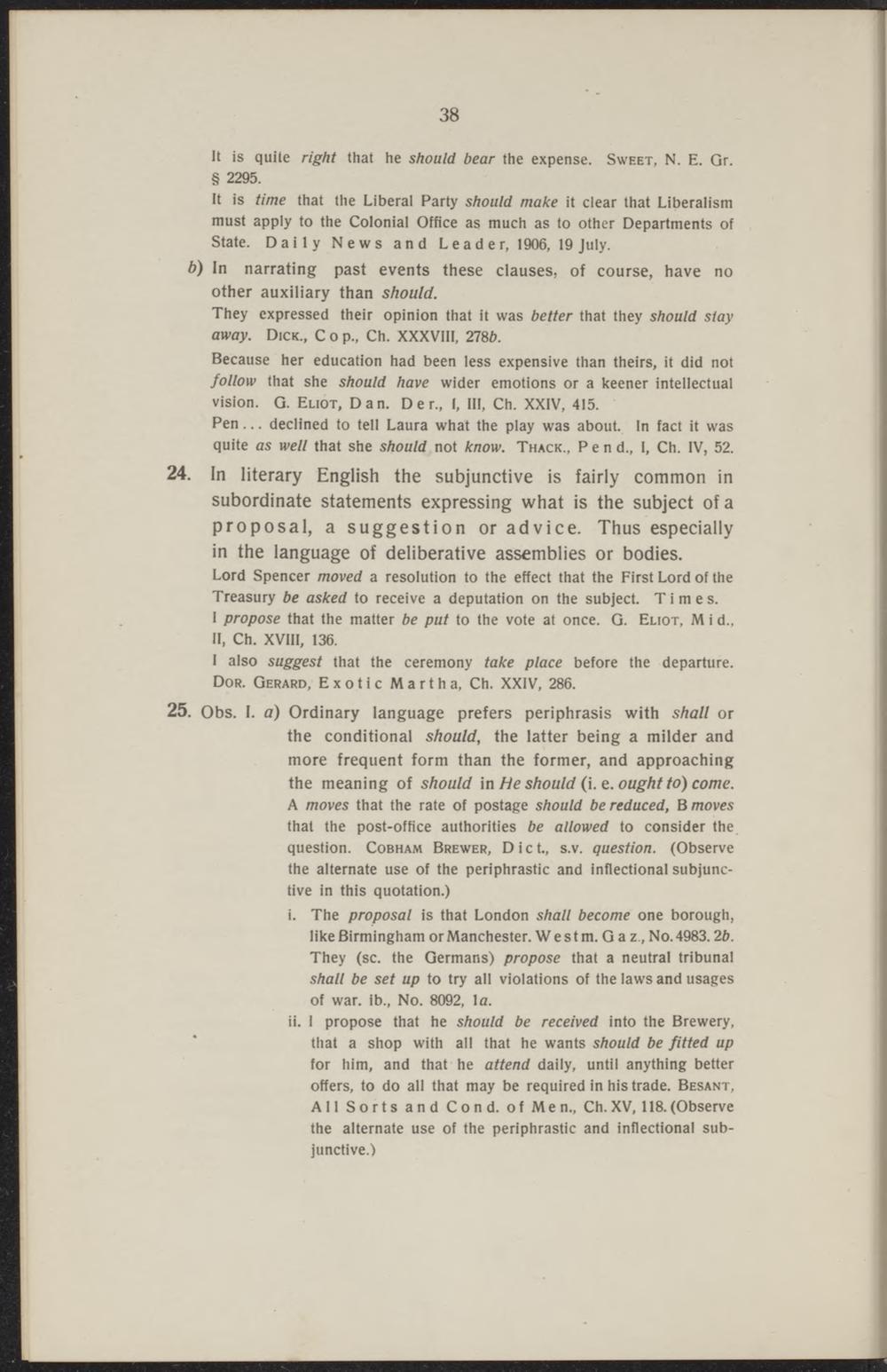 It is time that the Liberal Party should make it clear that Liberalism must apply to the Colonial Office as much as to other Departments of State. Oaily News and Leader, 1906, 19 July. b) In narrating past events these clauses, of course, have no other auxiliary than should.

They expressed their opinion that it was better that they should stay away. Dick., C o p, Ch. XXXVIII, 2786.

Because her education had been less expensive than theirs, it did not follow that she should have wider emotions or a keener inteliectual vision. G. Eliot, Dan. Der., I, III, Ch. XXIV, 415. Pen... dectined to teil Laura what the play was about. in fact it was quite as well that she should not know. Thack., P e n d., I, Ch. IV, 52.

24. In literary English the subjunctive is fairly common in subordinate statements expressing what is the subject ofa proposal, a suggestion or advice. Thus especially in the language of deliberative assemblies or bodies.

Lord Spencer moved a resolution to the effect that the First Lord of the Treasury be asked to receive a deputation on the subject Times. I propose that the matter be put to the vote at once. G. Eliot, M i d, II, Ch. XVIII, 136.

25. Obs. I. a) Ordinary language prefers periphrasis with shall or

the conditional should, the latter being a milder and more frequent form than the former, and approaching the meaning of should in He should (i. e. ought to) come. A moves that the rate of postage should bereduced, B moves that the post-office authorities be allowed to consider the question. Cobham Brewer, Dict, s.v. question. (Observe the alternate use of the periphrastic and inflectional subjunctive in this quotation.)

i. The proposal is that London shall become one borough, like Birmingham or Manchester. Westm. Gaz, No. 4983.26. They (sc. the Germans) propose that a neutral tribunal shall be set up to try all violations of thelawsand usages of war. ib„ No. 8092, la.

ii. I propose that he should be recelved into the Brewery, that a shop with all that he wants should be fltted up for him, and that' he attend daily, until anything better offers, to do all that may be required in his trade. Besant, All Sorts and Cond. of Men, Ch.XV, 118.(Observe the alternate use of the periphrastic and inflectional subjunctive.)