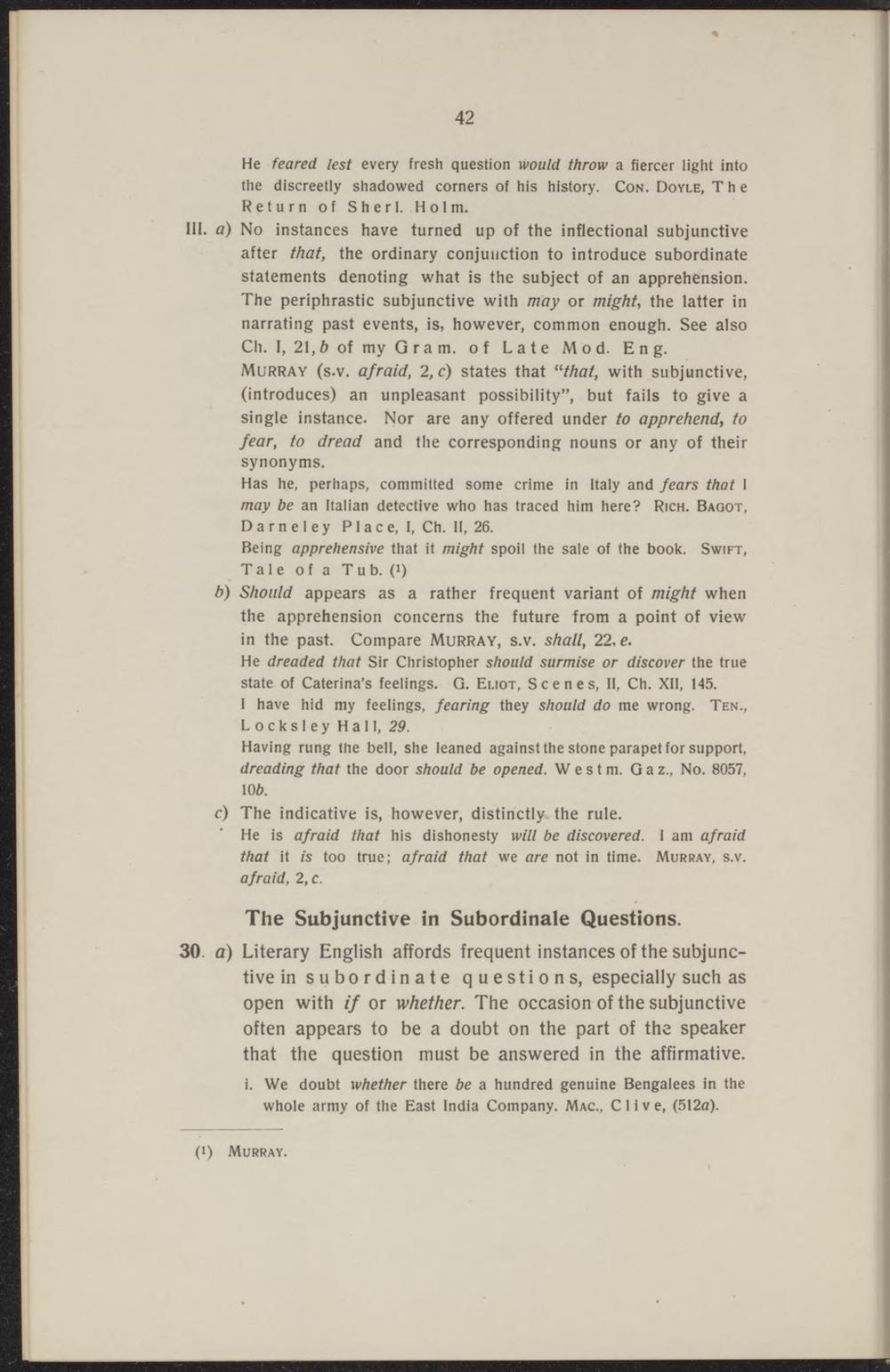 He feared lest every fresh question would throw a fiercer light into the discreetly shadowed corners of his history. Con. Doyle, The Return of Sherl. Holm. d) No instances have turned up of the inflectional subjunctive after that, the ordinary con ju net ion to introducé subordinate statements denoting what is the subject of an apprehehsion. The periphrastic subjunctive with may or might, the latter in narrating past events, is, however, common enough. See also Ch. I, 21,6 of my Gram. of Late Mod. Eng. Murray (s.v. afraid, 2,c) states that "that, with subjunctive, (introducés) an unpleasant possibility", but fails to give a single instance. Nor are any offered under to apprehend, to fear, to dread and the corresponding nouns or any of their synonyms.

Has he, perhaps, committed some crime in Italy and fears that I may be an Italian detective who has traced him here? Rich. Baoot, Darneley PI a c e, I, Ch. II, 26.

Being apprehensive that it might spoil the sate of the book. Swift, Ta 1 e of a Tnb. (')

b) Should appears as a rather frequent variant of might when the apprehension concerns the future from a point of view in the past. Compare Murray, s.v. shall, 22, e.

He dreaded that Sir Christopher should surmise or discover the true state of Caterina's feeiings. G. Eliot, Scènes, II, Ch. XII, 145. I have hid my feeiings, fearing they should do me wrong. Ten, Locksley Hall, 29.

Having rung the bell, she leaned against the stone parapet for support, dreading that the door should be opened. Westm. Gaz, No. 8057, 106.

c) The indicative is, however, distinctly the rule.

He is afraid that his dishonesty will be discovered. I am afraid that it is too true; afraid that we are not in time. Murray, s.v. afraid, 2,c.

The Subjunctive in Subordinale Questions.

a) Literary English affords frequent instances of the subjunctive in subordinate questions, especially such as open with if or whether. The occasion of the subjunctive often appears to be a doubt on the part of the speaker that the question must be answered in the affirmative.

i. We doubt whether there 6e a hundred genuine Bengalees in the whole army of the East India Company. Mac, C1 i v e, (512a).