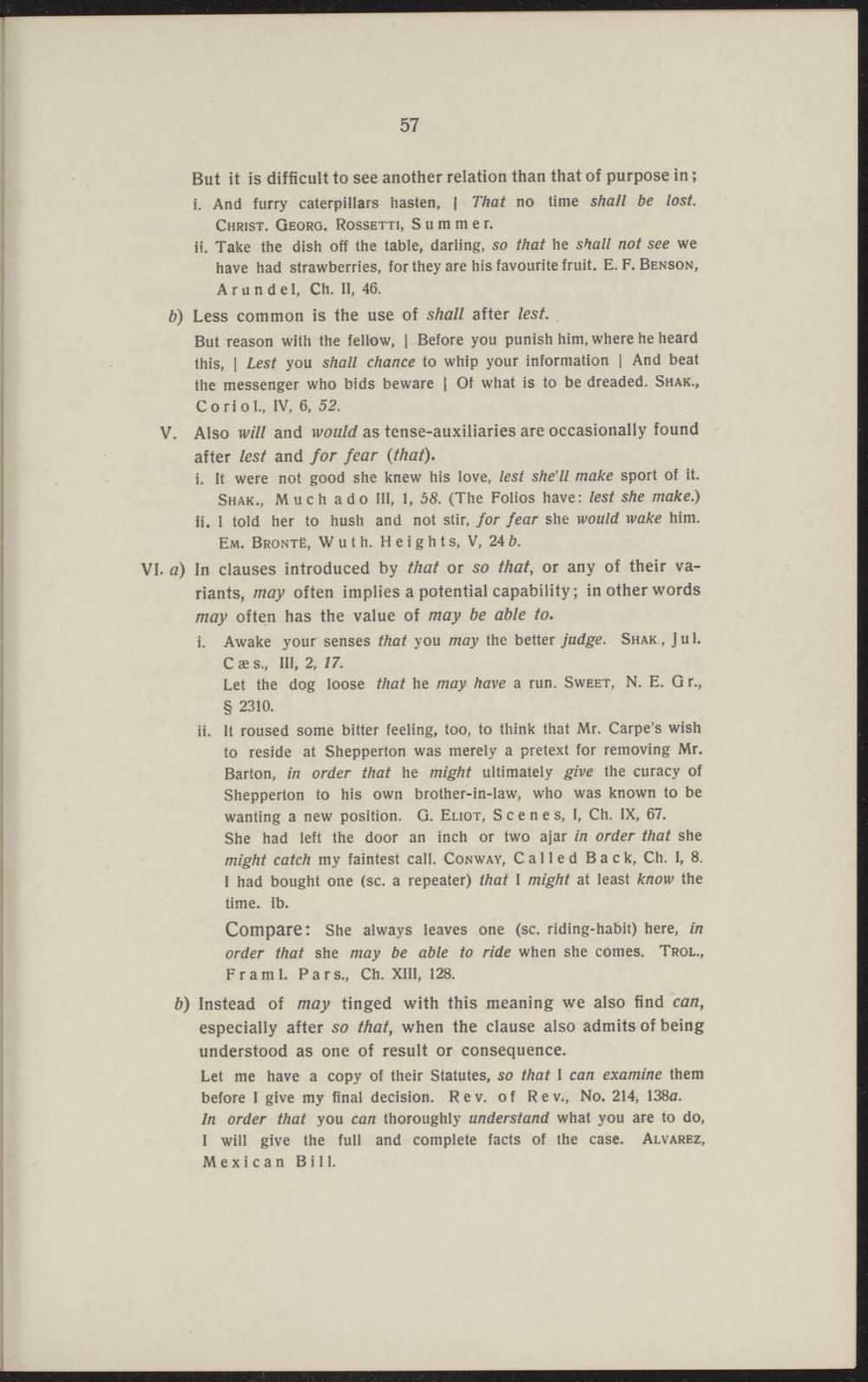 But it is dif heult to see another relation than that of purpose in; i. And furry caterpillars hasten, | That no time shall be lost.

Christ. Georo. Rossbtti, S u m m e r. II. Take the dish off the table, darling, so that he shall not see we

have had strawberrles, for they are his favourite fruit. E. F. Benson,

But reason with the fellow, | Before you punish him, where he heard this, | Lest you shall chance to whip your Information | And beat the messenger who bids beware | Of what is to be dreaded. Shak., Coriol., IV, 6, 52. V. Also will and would as tense-auxiliaries are occasionally found after lest and for fear (that).

i. It were not good she knew his love, lest she'11 make sport of it.

Em. Brontë, Wuth. Heights, V, 24o. . a) In clauses introduced by that or so that, or any of their variants, may often implies a potential capability; in other words may often has the value of may be able to.

ii. It roused some bitter feellng, too, to think that Mr. Carpe's wish to reside at Shepperton was merely a pretext for removing Mr. Barton, in order that he might ultimately give the curacy of Shepperton to his own brother-in-Iaw, who was known to be wanting a new position. G. Eliot, Scènes, I, Ch. IX, 67. She had left the door an inch or two ajar in order that she might catch my faintest call. Conway, Called Back, Ch. I, 8. I had bought one (sc. a repeater) that I might at least know the time. Ib.

Compare: She always leaves one (sc. riding-hablt) here, in order that she may be able to ride when she comes. Trol., Framl. Pars, Ch. XIII, 128. b) Instead of may tinged with this meaning we also find "can,

especially after so that, when the clause also admits of being

understood as one of result or consequence.

Let me have a copy of their Statutes, so that I can examine them

In order that you can thoroughly onderstand what you are to do,

I will give the full and complete facts of the case. Alvarez,