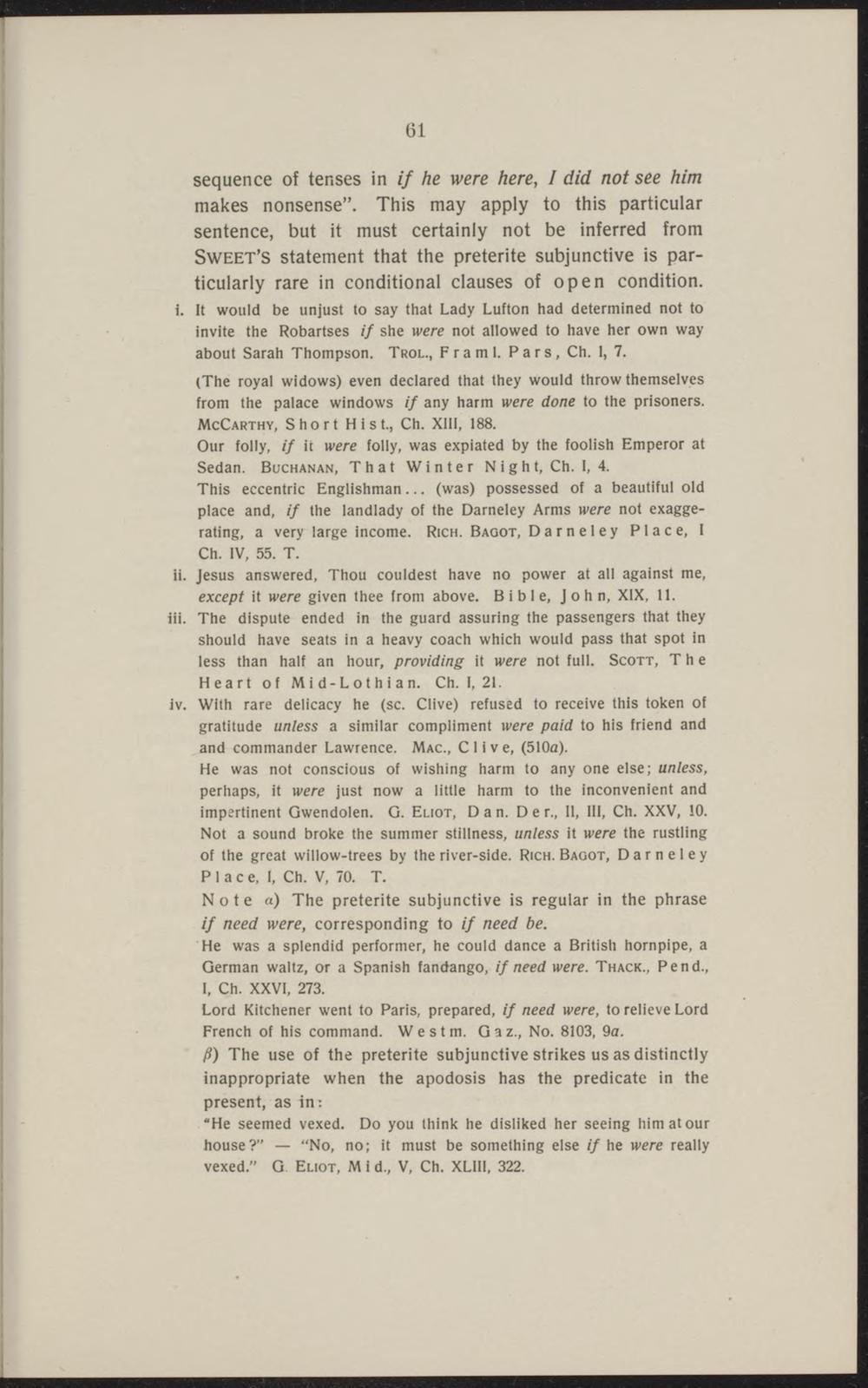 sequence of tenses in if he were here, I did not see him makes nonsense". This may apply to this particular sentence, but it must certainly not be inferred from Sweet'S statement that the preterite subjunctive is particularly rare in conditional clauses of open condition. 1. It would be unjust to say that Lady Lufton had determined not to invite the Robartses if she were not allowed to have her own way about Sarah Thompson. Trol., F r a m 1. Pars, Ch. 1, 7. (Thé royal widows) even declared that they would throw themselves from the palace Windows if any harm were done to the prisoners. McCarthy, Short Hist, Ch. XIII, 188.

Our folly, if it were folly, was expiated by the foolish Emperor at Sedan. Buchanan, That Winter Night, Ch. I, 4. This eccentric Englishman... (was) possessed of a beautiful old place and, if the landlady of the Darneley Arms were not exaggerating, a very large income. Rich. Bagot, D a r n e 1 e y Place, I Ch. IV, 55. T.

ii. Jesus answered, Thou couldest have no power at alt against me, except it were given thee Irom above. B i b I e, John, XIX, 11.

iii. The dispute ended in the guard assuring the passengers that they should have seats in a heavy coach which would pass that spot In less than half an hour, providing it were not full. Scott, The Heart of Mid-Lothian. Ch. I, 21.

iv. With rare delicacy he (sc. Clive) refuséd to receive this token of gratitude unless a slmilar compliment were paid to his friend and and commander Lawrence. Mac, Clive, (510a).

He was not consclous of wishing harm to any one else; unless, perhaps, it were just now a little harm to the inconvenient and impertinent Gwendolen. G. Eliot, Dan. Der., II, III, Ch. XXV, 10. Not a sound broke the summer stillness, unless it were the rustllng of the great willow-trees by the river-side. Rich. Baoot, Darneley Place, I, Ch. V, 70. T.

Note a) The preterite subjunctive is reguiar in the phrase if need were, corresponding to if need be. He was a splendid performer, he could dance a British hornpipe, a German waltz, or a Spanish fandango, if need were. Thack., Pend, I, Ch. XXVI, 273.

Lord Kitchener went to Paris, prepared, if need were, to relieve Lórd French of hls command. Westm. Gaz, No. 8103, 9a. ' B) The use of the preterite subjunctive strikes us as distinctly inappropriate when the apodosis has the predicate in the present, as in: