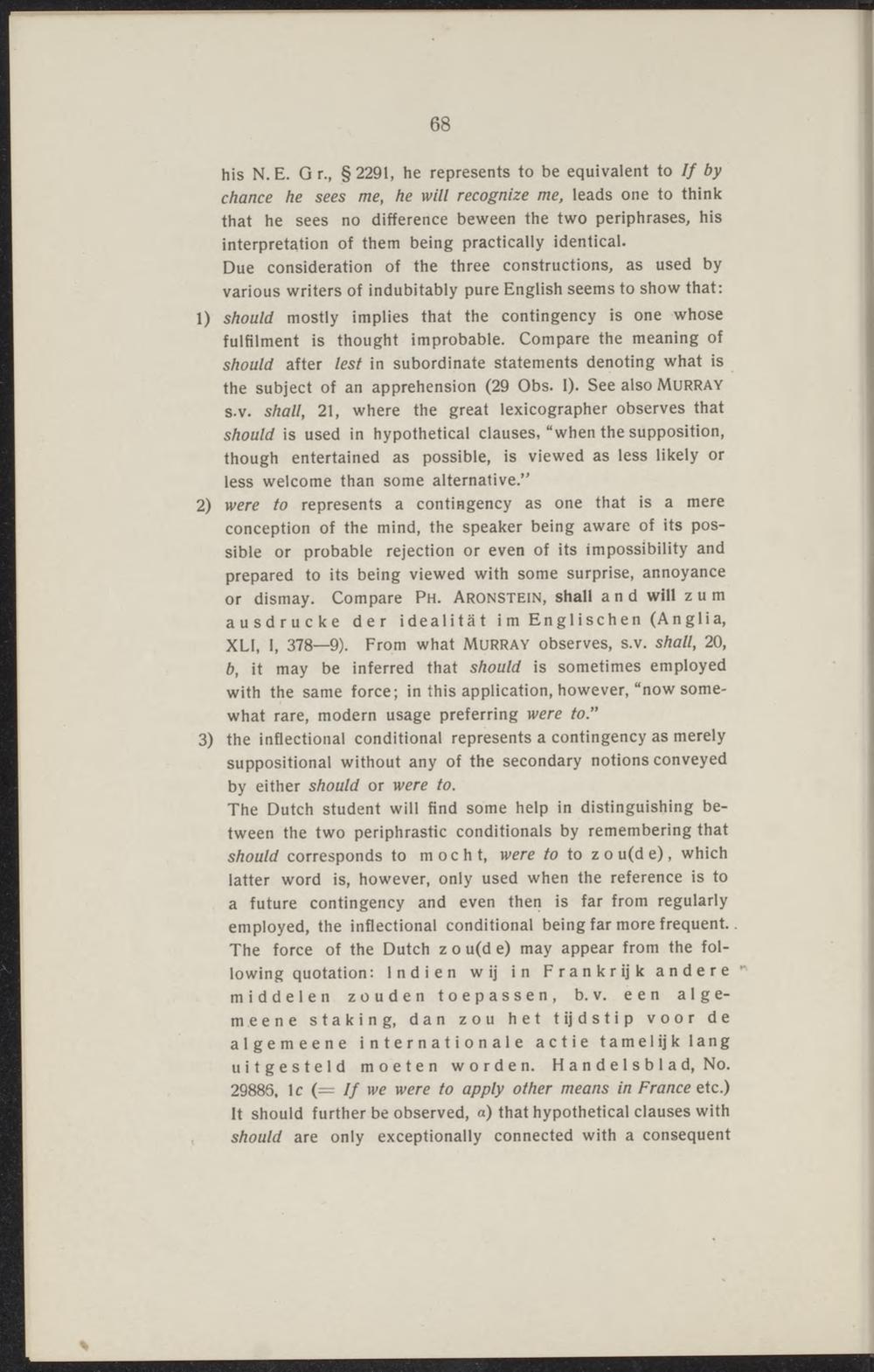 his N. E. G r., § 2291, he represents to be equivalent to If by chance he sees me, he will recogntze me, leads one to think that he sees no difference beween the two periphrases, his interpretation of them being practically identical. Due consideration of the three constructions, as used by various writers of indubitably pure English seems to show that: should mostly implies that the contingency is one whose fulfilment is thought improbable. Compare the meaning of should after lest in subordinate statements denoting what is the subject of an apprehension (29 Obs. 1). See also Murray s.v. shall, 21, where the great lexicographer observes that should is used in hypothetical clauses, "when the supposition, though entertained as possible, is viewed as less likely or less welcome than some alternative."

were to represents a contingency as one that is a mere conception of the mind, the speaker being aware of its possible or probable rejection or even of its impossibility and prepared to its being viewed with some surprise, annoyance or dismay. Compare Ph. Aronstein, shall and will z u m ausdrucke der idealitat im Englischen (Anglia, XLI, I, 378—9). From what Murray observes, s.v. shall, 20, b, it may be inferred that should is sometimes employed with the same force; in this application, however, "now somewhat rare, modern usage preferring were to." the inflectional conditional represents a contingency as merely suppositional without any of the secondary notions conveyed by either should or were to.

The Dutch student will find some help in distinguishing between the two periphrastic conditionals by remembering that should corresponds to mocht, were to to zou(de), which latter word is, however, only used when the reference is to a future contingency and even then is far from regularly employed, the inflectional conditional being far more frequent. The force of the Dutch zou(de) may appear from the following quotation: Indien wij in Frankrijk andere middelen zouden toepassen, b.v. een algemeene staking, dan zou het tijdstip voor de algemeene internationale actie tamelijk lang uitgesteld moeten worden. HandeIsbIad, No. 29886, lc (= If we were to apply other means in France etc.) It should further be observed, «) that hypothetical clauses with should are only exceptionally connected with a consequent