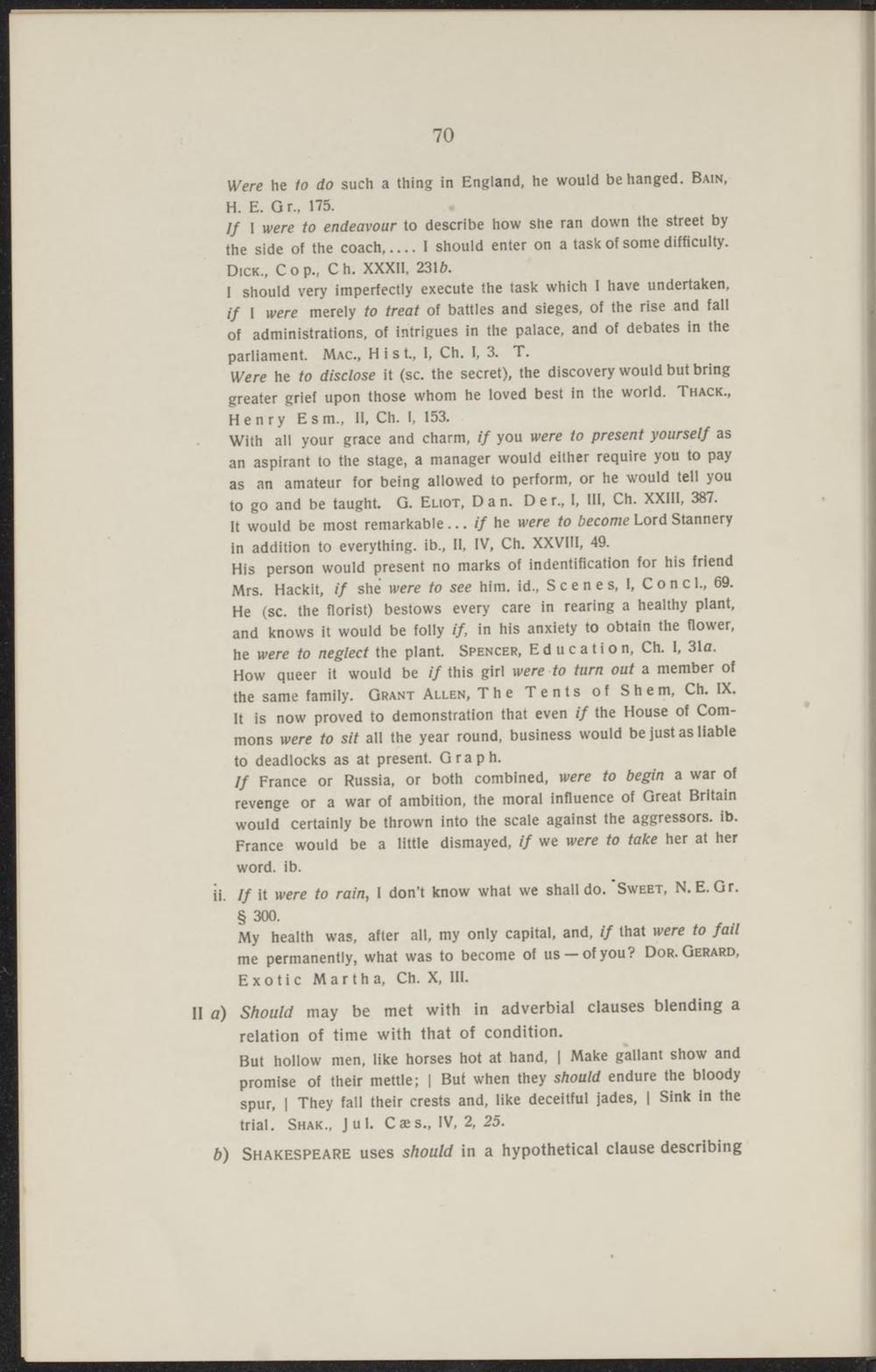 the side of the coach I should enter on a task of some difficulty.

I should very imperfectly execute the task which 1 have undertaken, if I were tnerely to treat of battles and sieges, of the rise and fall of administrations, of intrigues in the palace, and of debates in the parllament. Mac, H i s t, I, Ch. I, 3. T.

Were he to disclose it (sc. the secret), the discovery would but bring greater grief upon those whom he loved best in the world. Thack., Henry Esm, II, Ch. I, 153.

With all your grace and charm, if you were to present yonrself as an aspirant to the stage, a manager would either require you to pay as an amateur for being allowed to perform, or he would teil you to go and be taught G. Eliot, Dan. Der, I, III, Ch. XXIII, 387. It would be most remarkable... if he were to become Lord Stannery in addition to everything. ib, II, IV, Ch. XXVIII, 49. His person would present no marks of indentiflcation for his Wend Mrs. Hackit, if she' were to see him. id, S c e n e s, I, C o n c 1, 69. He (sc. the florist) bestows every care in rearing a heatthy plant, and knows it would be folly if, in his anxiety to obtain the flower, he were to neglect the plant Spencer, Education, Ch.1, 31a. How queer it would be if this glrl were to turn out a member of the same family. Grant Allen, The Tents of Shem, Ch. LX, It Is now proved to demonstration that even if the House of Commons were to sit all the year round, business would be just as liable to deadlocks as at present. G ra p h.

If France or Russia, or both combined, were to begin a war of revenge or a war of ambition, the moral Innuence of Great Britaln would certainly be thrown into the scale against the aggressors. Ib. France would be a Httle dismayed, if we were to take her at her word. ib.

My health was, after all, my only capital, and, if that were to fail me permanently, what was to become of us — of you? Dor.Gerard, Exotic Martha, Ch. X, III. II a) Should may be met with in adverbial clauses blending a relation of time with that of condition. But hollow men, like horses hot at hand, | Make gallant show and promise of their mettle; | But when they should endure the bloody spur, | They fall their crests and, Hke deceltful jades, | SInk In the trial. Shak, Jat. Caes, IV, 2, 25. b) Shakespeare uses should in a hypothetical clause describing