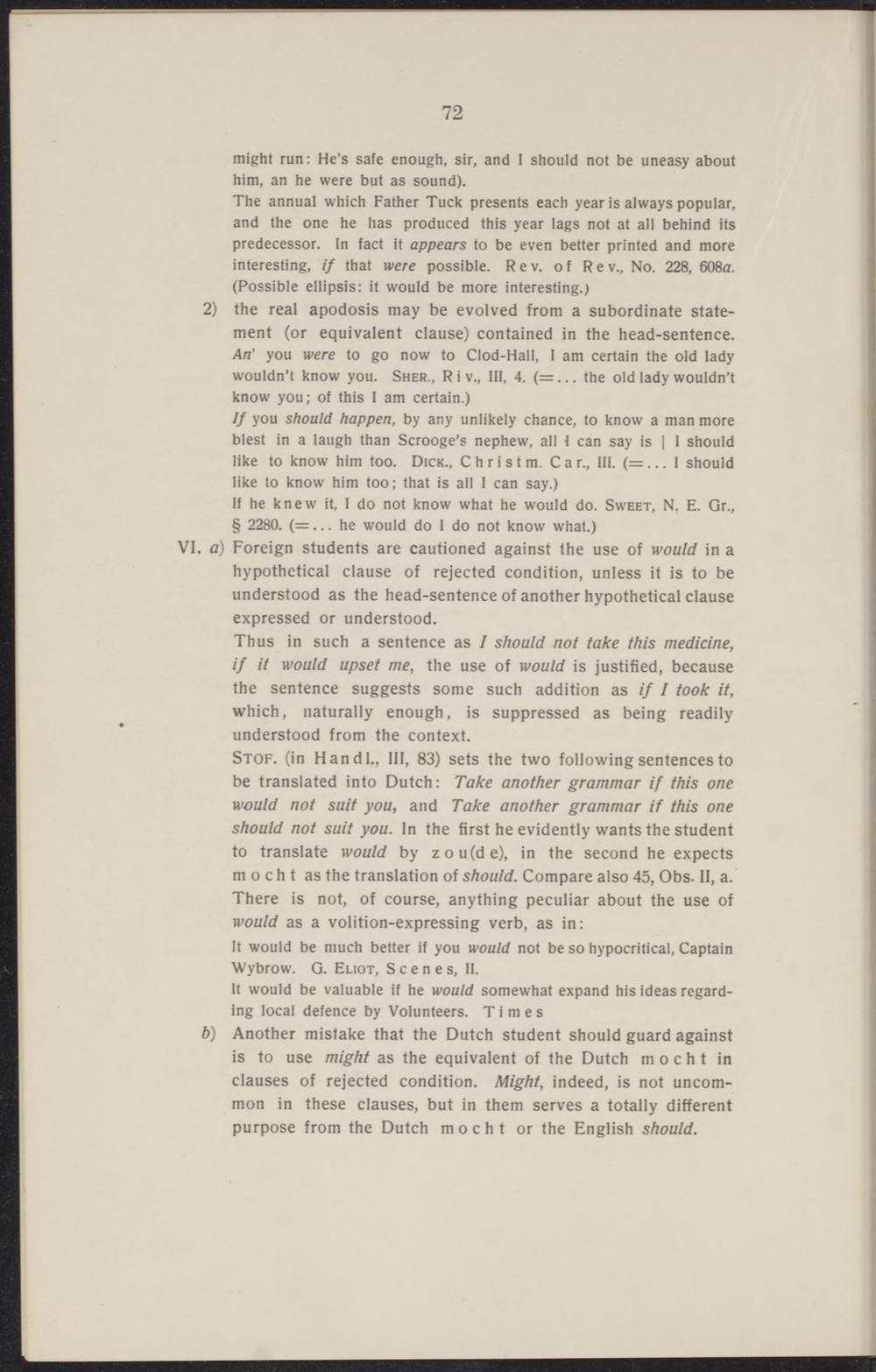 might run: He's safe enough, sir, and I should not be uneasy about him, an he were but as sound).

The annual which Father Tuck presents each year is always popular, and the one he has produced this year lags not at all behind its predecessor. In fact it appears to be even better printed and more interesting, if that were possible. Rev. of Rev, No. 228, 608a. (Possible ellipsis: it would be more interesting.) 2) the real apodosis may be evolved from a subordinate statement (or equivalent clause) contained in the head-sentence. Art you were to go now to Clod-Hall, I am certain the old lady wouldn't know you. Sher, RI v, III, 4. (=... the old lady wouidn't know you; of this I am certain.)

If you should happen, by any unlikely chance, to know a man more biest in a laugh than Scrooge's nephew, all 1 can say is | I should like to know him too. Dick., Christin. Car, III. (=... I should like to know him too; that is all I can say.) If he knew it, I do not know what he would do. Sweet, N, E. Gr, § 2280. (=... he would do I do not know what) VI. a) Foreign students are cautioned against the use of would in a hypothetical clause of rejected condition, unless it is to be understood as the head-sentence of another hypothetical clause expressed or understood.

Thus in such a sentence as I should not take this medicine, if it would upset me, the use of would is justified, because the sentence suggests some such addition as if I took it, which, naturally enough, is suppressed as being readily understood from the context.

Stof. (in Handl, III, 83) sets the two following sentences to be translated into Dutch: Take another grammar if this one would not snit you, and Take another grammar if this one should not suit you. In the first he evidently wants the student to translate would by zou(de), in the second he expects mocht as the translation of should. Compare also 45, Obs. II, a. There is not, of course, anything peculiar about the use of would as a volition-expressing verb, as in: It would be much better if you would not be so hypocritical, Captain Wybrow. G. Eliot, Scènes, II.

It would be valuable if he would somewhat expand his ideas regarding local defence by Volunteers. Times b) Another mistake that the Dutch student should guard against is to use might as the equivalent of the Dutch mocht in clauses of rejected condition. Might, indeed, is not uncommon in these clauses, but in them serves a totally different purpose from the Dutch mocht or the English should.