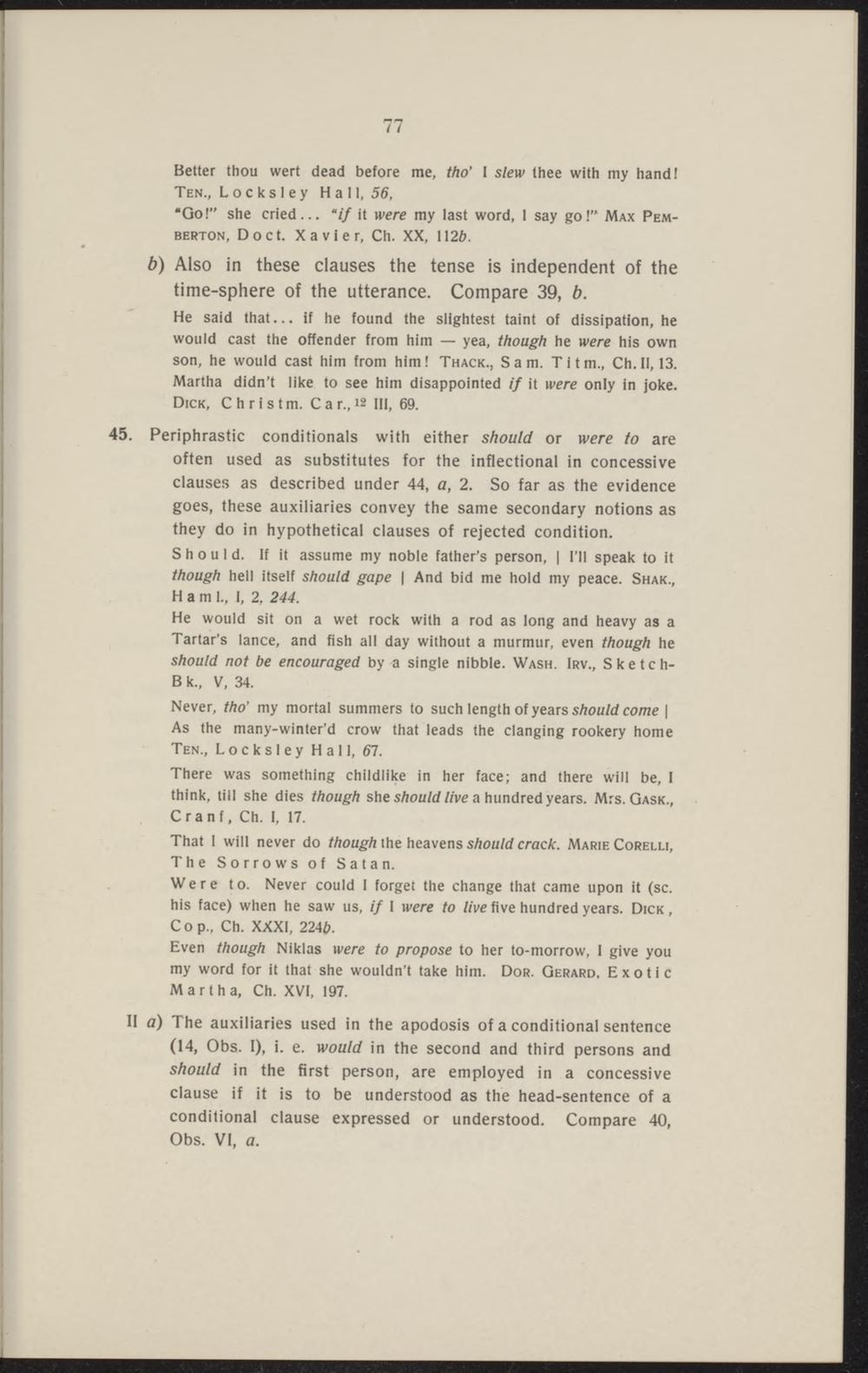 b) Also in these clauses the tense is independent of the time-sphere of the utterance. Compare 39, b. He said that... if he found the slightest taint of dissipation, he would cast the offender from him — yea, though he were his own son, he would cast him from him! Thack., Sam. Titm, Ch.II, 13. Martha didn't like to see him disappointed if it were only in joke. Dick, Christm. Car," III, 69.

45. Periphrastic conditionals with either should or were to are often used as substitutes for the inflectional in concessive clauses as described under 44, a, 2. So far as the evidence goes, these auxiliaries convey the same secondary notions as they do in hypothetical clauses of rejected condition. Should. If it assume my noble father's person, | 1*11 speak to it though heil itself should gape | And bid me hold my peace. Shak, H a m L, I, 2, 244.

He would sit on a wet rock with a rod as long and heavy as a Tartar*s lance, and fish all day without a murmur, even though he should not be encouraged by -a single nibble. Wash. Irv, SketchB k, V, 34.

Never, tho' my mortal summers to such length of years should come \ As the many-winter'd crow that leads the clanging rookery home Ten, LocksleyHall, 67.

There was something chlldiike in her face; and there will be, I think, tiil she dies though she should live a hundred years. Mrs. Gask, Cranf, Ch. I, 17.

That I will never do though the heavens should crack. Marie Corelli, The Sorrows of Satan.

Even though Niklas were to propose to her to-morrow, I give you my word for it that she wouldn't take him. Dor. Gerard, Exotic Martha, Ch. XVI, 197.

II a) The auxiliaries used in the apodosis of a conditional sentence (14, Obs. I), I. e. would in the second and third persons and should in the first person, are employed in a concessive clause if it is to be understood as the head-sentence of a conditional clause expressed or understood. Compare 40, Obs. VI, a.