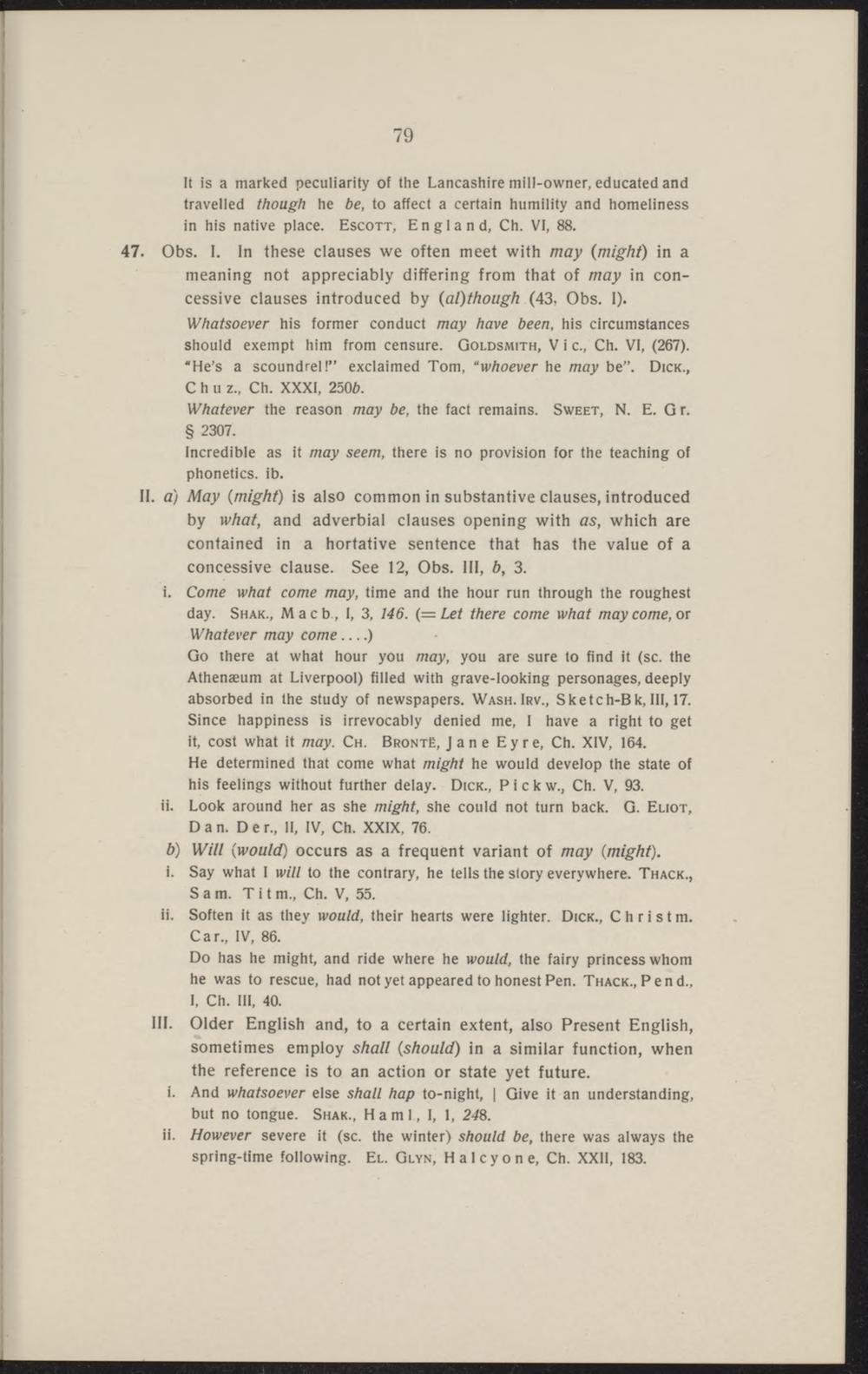 It is a marked peculiarity Of the Lancashire mlll-owner, educated and travelled though he be, to affect a certain humlllty and homeliness in his native place. Escott, England, Ch. VI, 88. 47. Obs. I. In these clauses we often meet with may (might) in a meaning not appreciably differing from that of may in concessive clauses introduced by (at)though (43, Obs. I). Whatsoever his former conduct may have been, his circumstances should exempt him from censure. Goldsmith, V i c, Ch. VI, (267). "He's a scoundrelf" exclaimed Tom, "whoever be may be". Dick., Chuz., Ch. XXXI, 2506.

Incredible as it may seem, there is no provision for the teaching of phonetics. ib.

II. a) May (might) is also common in substantive clauses, introduced by what, and adverbial clauses opening with as, which are contained in a hortative sentence that has the value of a concessive clause. See 12, Obs. III, b, 3.

Go there at what hour you may, you are sure to find it (sc. the Athenaeum at Liverpool) filled with grave-looking personages, deeply absorbed in the study of newspapers. Wash. Irv, Sketch-Bk, III, 17. Since happiness is irrevocably denied me, I have a right to get it, cost what it may. Ch. Brontë, J a n e E y r e, Ch. XIV, 164. He determined that come what might he would develop the state of his feeiings without further delay. Dick., P i c k w, Ch. V, 93.

6) Will (would) occurs as a frequent variant of may (might).

Do has he might, and ride where he would, the fairy princesswhom he was to rescue, had not yet appeared to honest Pen. Thack, Pen d, I, Ch. III, 4a

III. Older English and, to a certain extent, also Present English, sometimes employ shall (should) in a similar function, when the reference is to an action or state yet future. i. And whatsoever else shall hap to-night, | Give it an understanding, but no tongue. Shak, H a m 1, I, 1, 24%.