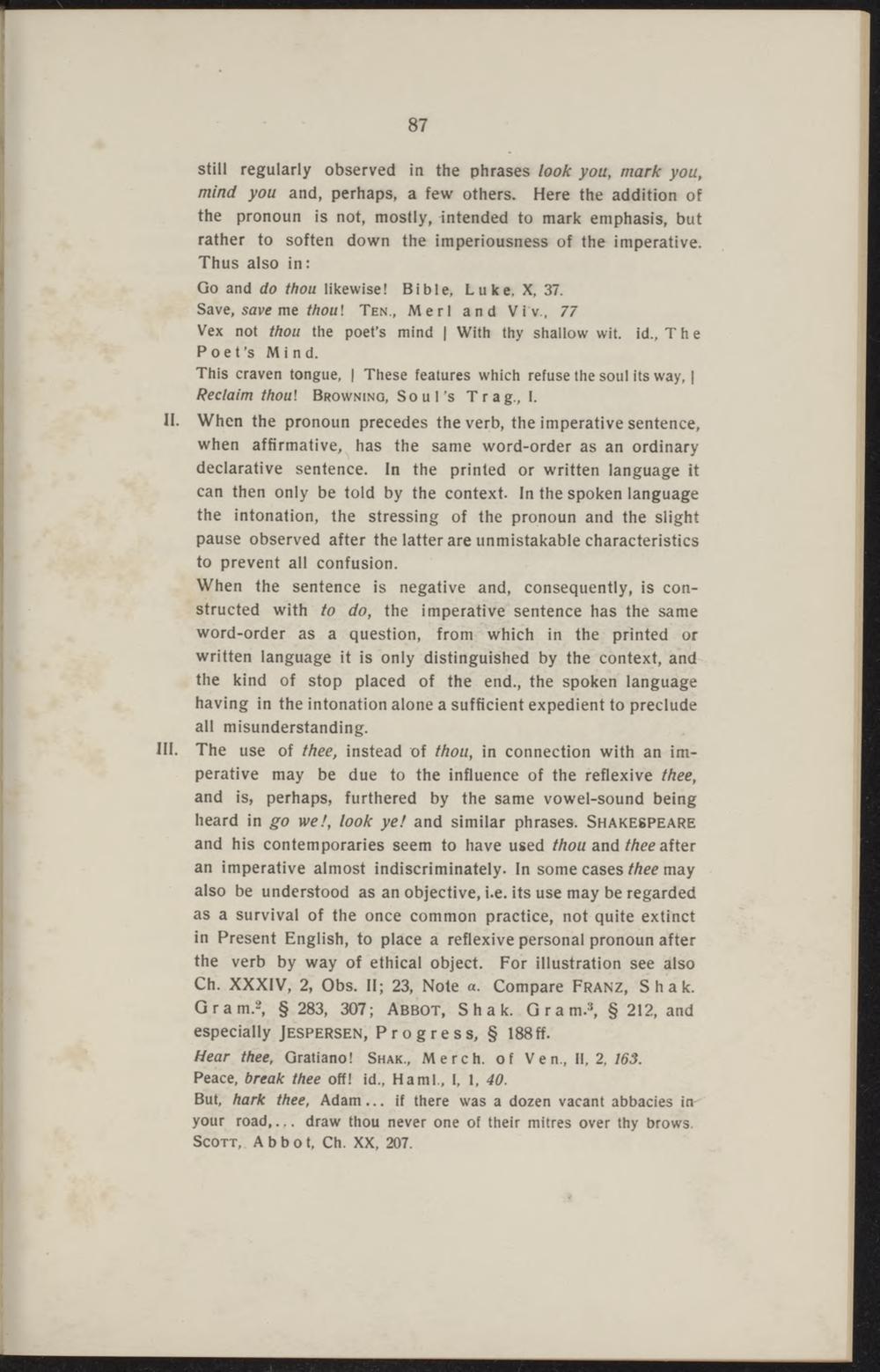 still regularly observed in the phrases look you, mark you, mind you and, perhaps, a few others. Here the addition of the pronoun is not, mostly, intended to mark emphasis, but rather to soften down the imperiousness of the imperative. Thus also in:

Vex not thou the poefs mind | with thy shaliow wit. id, The

This craven tongue, | These features which refuse the soul its way, | Reclaim thou! Browning, Sou I's Trag, I. When the pronoun precedes the verb, the imperative sentence, when affirmative, has the same word-order as an ordinary declarative sentence. In the printed or written language it can then only be told by the context. In the spoken language the intonation, the stressing of the pronoun and the slight pause observed after the latter are unmistakable characteristics to prevent all confusion.

When the sentence is negative and, consequently, is constructed with to do, the imperative sentence has the same word-order as a question, from which in the printed or written language it is only distinguished by the context, and the kind of stop placed of the end, the spoken language having in the intonation alone a sufficiënt expediënt to preclude all misunderstanding.

The use of thee, instead of thou, in connection with an imperative may be due to the influence of the reflexive thee, and is, perhaps, furthered by the same vowel-sound being heard in go we!, look yet and similar phrases. Shakespeare and his con temporaries seem to have used thou and thee after an imperative almost indiscriminately. In some cases Mee may also be understood as an objective, i.e. its use may be regarded as a survival of the once common practice, not quite extinct in Present English, to place a reflexive personal pronoun after the verb by way of ethical object. For illustration see also Ch. XXXIV, 2, Obs. II; 23, Note a. Compare Franz, Shak. Gram.2, § 283, 307; Abbot, Shak. Gram.8, § 212, and especially Jespersen, Progress, § 188ff. Hear thee, Oratiano! Shak, Merch. of Ven, H, 2, 163. Peace, break thee off! id, Haml, I, 1, 40.

But, hark thee, Adam... if there was a dozen vacant abbacies in-' your road,... draw thou never one of their mitres over thy brows Scott, Abbot, Ch. XX, 207.