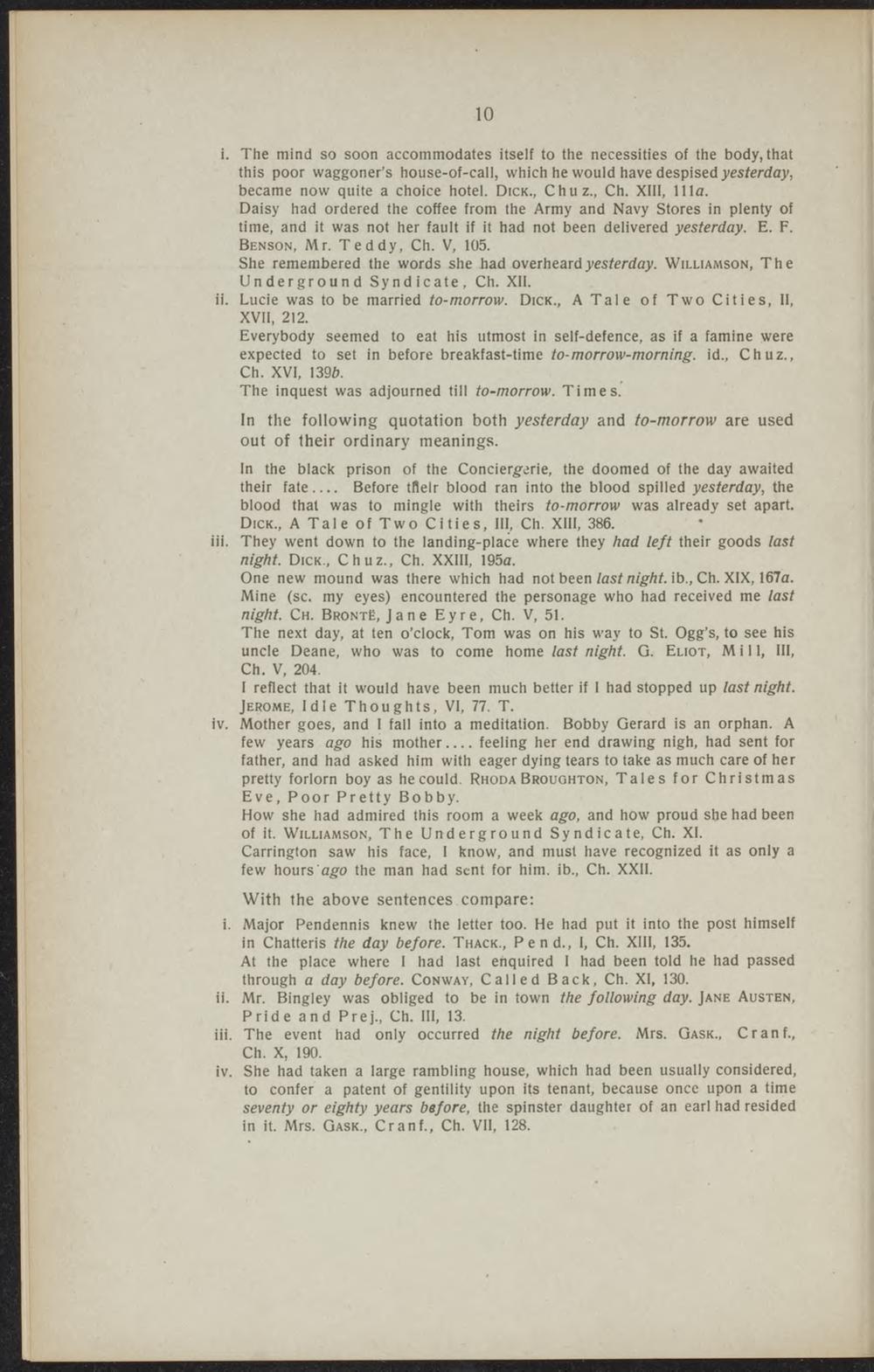 i. The mind so soon accommodates itseif to the necessities of the body, that this poor waggoner's house-of-call, which he would have despisedyesterday, became now quite a choice hotel. Dick, Chuz, Ch. XIII, lila.

Daisy had ordered the coffee from the Army and Navy Stores in plenty of time, and it was not her fault if it had not been delivered yesterday. E. F. Benson, Mr. Teddy, Ch. V, 105.

She remembered the words she had overheardyesterday. Williamson, The Underground Syndicate, Ch. XII.

Everybody seemed to eat hls utmost in self-defence, as if a famine were expected to set in before breakfast-time to-morrow-morning. id, Chuz., Ch. XVI, 139Ö.

The inquest was adjourned till to-morrow. Times.

In the following quotation both yesterday and to-morrow are used out of their ordinary meanings.

In the black prison of the Concier^erie, the doomed of the day awaited

their fate Before tflelr blood ran into the blood spilled yesterday, the

blood that was to mingle with theirs to-morrow was already set apart. Dick, A Tale of Two Cities, III, Ch. XIII, 386.

iii. They went down to the landing-place where they had left their goods last night. Dick, Chuz., Ch. XXIII, 195a.

One new mound was there which had not been last night. ib, Ch. XIX, 167a. Mine (sc. my eyes) encountered the personage who had received me last night. Ch. Brontë, Jane Eyre, Ch. V, 51.

I refiect that it would have been much better if I had stopped up last night. Jerome, Idle Thoughts, VI, 77. T.

iv. Mother goes, and I fall into a meditation. Bobby Gerard is an orphan. A

few years ago his mother feeling her end drawing nigh, had sent for

father, and had asked him with eager dying tears to take as much care of her pretty forlorn boy as he could. Rhoda Brouohton, Tales for Christmas Eve, Poor Pretty Bobby.

How she had admired this room a week ago, and how proud she had been of it. Williamson, The Underground Syndicate, Ch. XI. Carrington saw his face, I know, and must have recognlzed it as only a few hours ago the man had sent for him. ib, Ch. XXII.

With the above sentences compare: i. Major Pendennis knew the letter too. He had put it into the post himself in Chatteris the day before. Thack, Pend, 1, Ch. XIII, 135. At the place where I had last enquired I had been told he had passed through a day before. Conway, Called Back, Ch. XI, 130.

ii. Mr. Bingley was obliged to be in town the following day. Jane Austen, Pride and Prej, Ch. III, 13.

iv. She had taken a large rambling house, which had been usually considered, to confer a patent of gentility upon its tenant, because once upon a time seventy or eighty years before, the spinster daughter of an earl had resided in it. Mrs. Gask, Cranf., Ch. VII, 128.