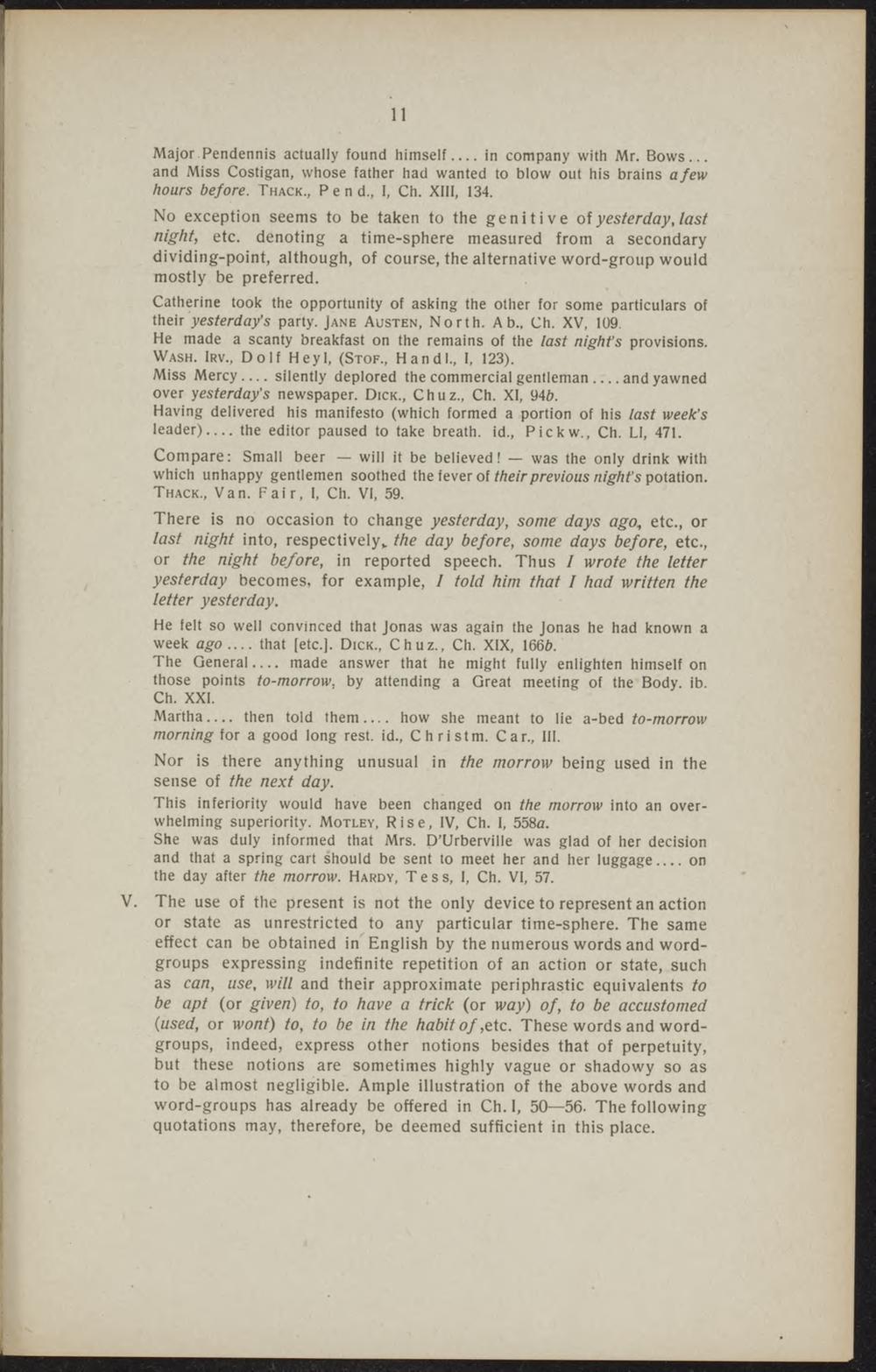 Major.Pendennis actually found himself in company with Mr. Bows...

and Miss Costigan, whose father had wanted to blow out his brains afew hours before. Thack, Pend, I, Ch. XIII, 134.

No exception seems to he taken to the genitive of yesterday, last night, etc. denoting a time-sphere measured from a secondary dividing-point, although, of course, the alternative word-group would mostly be preferred.

Catherine took the opportunity of asking the other for some particulars of their yesterdays party. Jane Austen, North. Ab, Ch. XV, 109. He made a scanty breakfast on the remains of the last nighfs provisions. Wash. Irv, Dolf Heyl, (Stof, Handl, I, 123).

Compare: Small beer — will it be believed! — was the only drink with which unhappy gentlemen soothed the lever of theirprevious n(gftf s potation. Thack, Van. Fair, i, Ch. VI, 59.

There is no occasion to change yesterday, some days ago, etc, or last night into, respectively» the day before, some days before, etc, or the night before, in reported speech. Thus / wrote the letter yesterday becomes, for example, / told him that I had written the ietter yesterday.

He telt so well convinced that Jonas was again the Jonas he had known a week ago.... that [etc.]. Dick, Chuz., Ch. XIX, 1666. The Qeneral — made answer that he might fully enlighten himself on those points to-morrow, by attending a Great meeting of the Body. ib. Ch. XXI.

Martha.... then told them how she meant to lie a-bed to-morrow

Nor is there anything unusual in the morrow being used in the sense of the next day.

She was duly informed that Mrs. D'Urberville was glad of her decision

The use of the present is not the only device to represent an action or state as unrestricted to any particular time-sphere. The same effect can be obtained in' English by the numerous words and wordgroups expressing indefinite repetition of an action or state, such as can, use, will and their approximate periphrastic equivalents to be apt (or given) to, to have a trick (or way) of, to be accustomed (used, or wont) to, to be in the habit of ,etc. These words and wordgroups, indeed, express other notions besides that of perpetuity, but these notions are sometimes highly vague or shadowy so as to be almost negligible. Ample illustration of the above words and word-groups has already be offered in Ch. I, 50—56. The following quotations may, therefore, be deemed sufficiënt in this place.