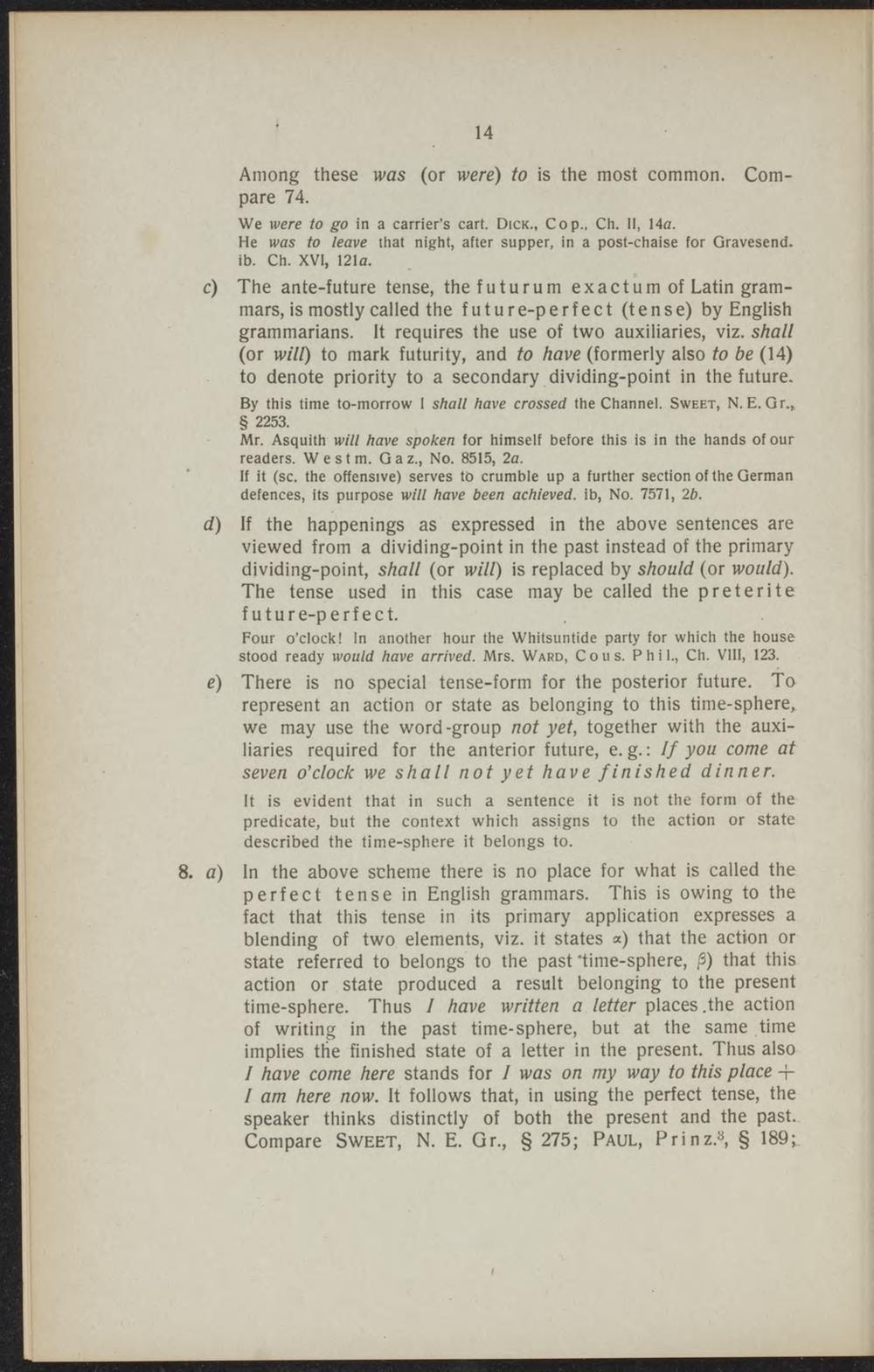 Among these was (or were) to is the most common. Compare 74.

He was to leave that night, after supper, in a post-chaise for Gravesend.

c) The ante-future tense, the futurum exactum of Latin grammars, is mostly called the f u t u r e-p erfect (tense) by English grammarians. It requires the use of two auxiliaries, viz. shall (or will) to mark futurity, and to have (formerly also to be (14) to denote priority to a secondary dividing-point in the future.

Mr. Asquith will have spoken tot himself before this is in the hands of our readers. Westm. Gaz, No. 8515, 2a.

If it (sc. the offensive) serves to crumble up a further section of the German defences, its purpose will have been achieved. ib, No. 7571, 2b.

d) If the happenings as expressed in the above sentences are viewed from a dividing-point in the past instead of the primary dividing-point, shall (or will) is replaced by should (or would). The tense used in this case may be called the preterite future-perfect. v'--.-;i" Four o'clock! In another hour the Whitsuntide party for which the house stood ready would have arrived. Mrs. Ward, C o u s. P h i 1, Ch. VIII, 123.

e) There is no special tense-form for the posterior future. To represent an action or state as belonging to this time-sphere, we may use the word-group not yet, together with the auxiliaries required for the anterior future, e. g.: If you come at seven o'clock we shall not yet have finished dinner.

It is evident that in such a sentence it is not the form of the predicate, but the context which assigns to the action or state described the time-sphere it belongs to.

8. a) In the above scheme there is no place for what is called the perfect tense in English grammars. This is owing to the fact that this tense in its primary application expresses a blending of two elements, viz. it States «) that the action or state referred to belongs to the past time-sphere, P) that this action or state produced a result belonging to the present time-sphere. Thus / have written a letter places.the action of writing in the past time-sphere, but at the same time implies the finished state of a letter in the present. Thus also / have come here stands for / was on my way to this place + / am here now. It follows that, in using the perfect tense, the speaker thinks distinctly of both the present and the past. Compare Sweet, N. E. Gr, § 275; Paul, Prinz.3, § 1891