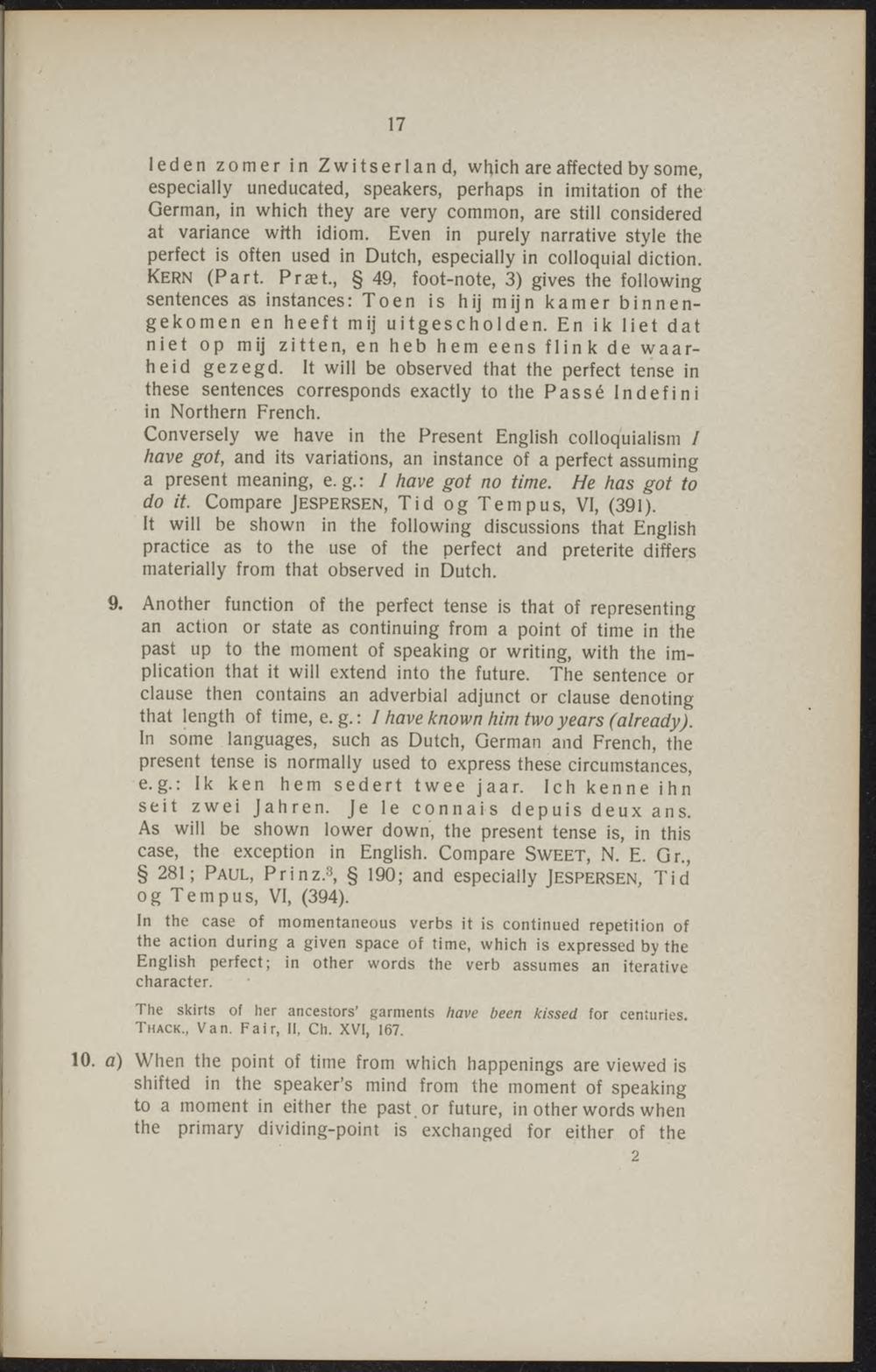 leden zomer in Zwitserland, wrdch are affected by some, especially uneducated, speakers, perhaps in imitation of the German, in which they are very common, are still considered at variance wtth idiom. Even in purely narrative style the perfect is often used in Dutch, especially in colloquial diction. Kern (Part. Pr ast, § 49, foot-note, 3) gives the following sentences as instances: Toen is hij mijn kamer binnengekomen en heeft mij uitgescholden. En ik liet dat niet op mij zitten, en heb hem eens flink de waarheid gezegd. It will be observed that the perfect tense in these sentences corresponds exactly to the Passé Indefini in Northern French.

Conversely we have in the Present English colloquialism / have got, and its variations, an instance of a perfect assuming a present meaning, e. g.: / have got no time. He has got to do it. Compare Jespersen, Tid og Tempus, VI, (391). It will be shown in the following discussions that English practice as to the use of the perfect and preterite differs materially from that observed in Dutch.

9. Another function of the perfect tense is that of representing an action or state as continuing from a point of time in the past up to the moment of speaking or writing, with the implication that it will extend into the future. The sentence or clause then contains an adverbial adjunct or clause denoting that length of time, e. g.: I have known him two years (already). In some languages, such as Dutch, German and French, the present tense is normally used to express these circumstances, e.g.: Ik ken hem sedert twee jaar. Ich kenne ihn seit zwei Jahren. Je le connais depuis deux ans. As will be shown lower down, the present tense is, in this case, the exception in English. Compare Sweet, N. E. Gr., § 281; Paul, Prinz.8, § 190; and especially jespersen, Tid og Tempus, VI, (394).

In the case of momentaneous verbs it is continued repetition of the action during a given space of time, which is expressed by the English perfect; in other words the verb assumes an iterative character. \ "*.■.'

The skirts of her ancestors' garments have been kissed for centuries. Thack., Van. Fair, II, Ch. XVI, 167.

a) When the point of time from which happenings are viewed is shifted in the speaker's mind from the moment of speaking to a moment in either the past or future, in other words when the primary dividing-point is exchanged for either of the