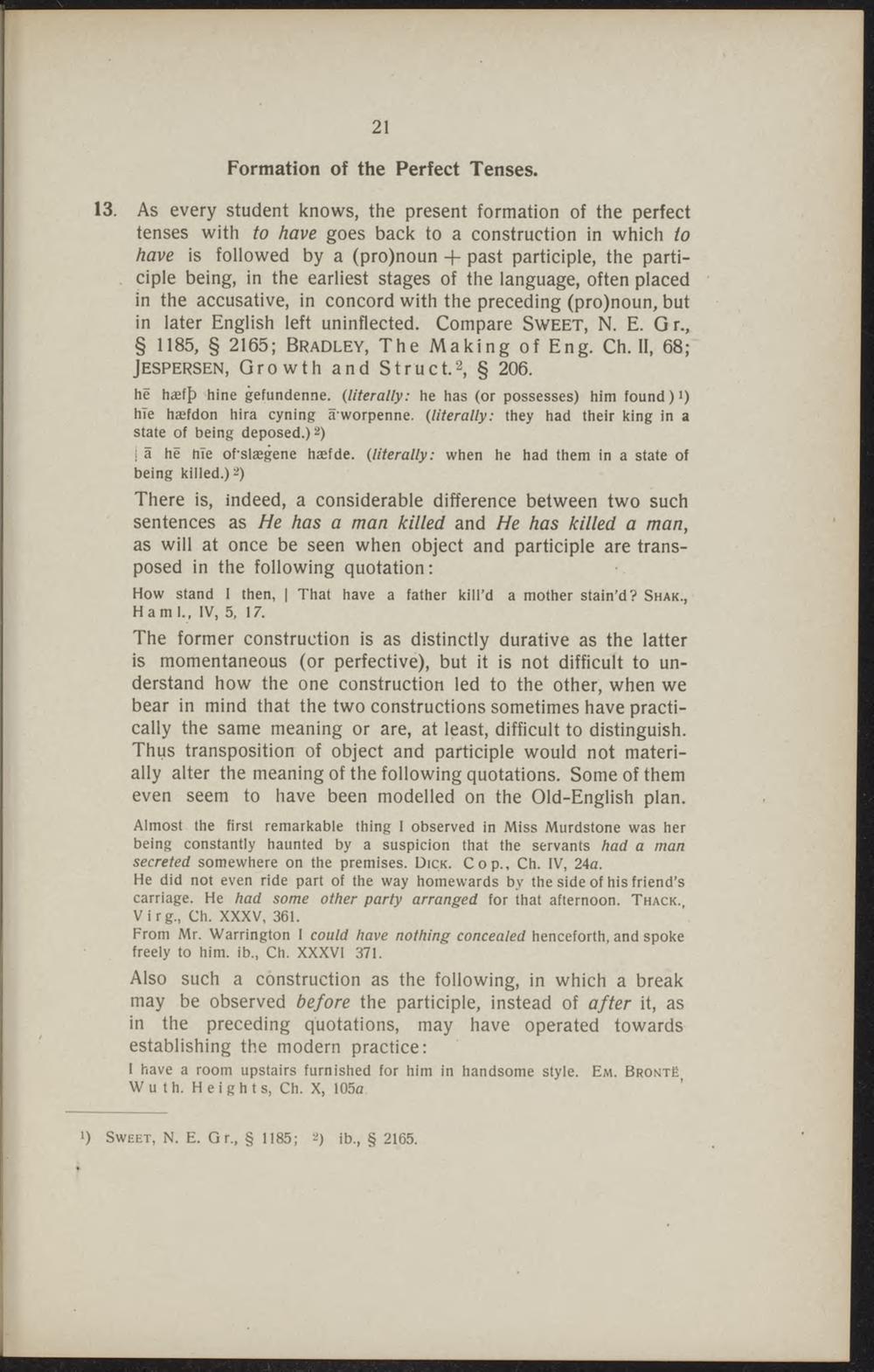 Formation of the Perfect Tenses.

13. As every student knows, the present formation of the perfect tenses with to have goes back to a construction in which to have is followed by a (pro)noun + past participle, the parti. ciple being, in the earliest stages of the language, often placed in the accusative, in concord with the preceding (pro)noun, but in later English left uninflected. Compare Sweet, N. E. Gr., § 1185, § 2165; Bradley, The Making of Eng. Ch. II, 68; jespersen, Growth and Struct.2, § 206. hê haefb hine gefundenne. (literally: he has (or possesses) him found)1) hïe hasfdon hira cyning ïrworpenne. (literally: they had their king in a state of being deposed.)2)

| a hê hïe of'slaegene haefde. (literally: when he had them in a state of being killed.)2)

There is, indeed, a considerable difference between two such sentences as He has a man killed and He has killed a man, as will at once be seen when object and participle are transposed in the following quotation: *fe#-V'

The former construction is as distinctly durative as the latter is momentaneous (or perfective), but it is not difficult to understand how the one construction led to the other, when we bear in mind that the two constructions sometimes have practically the same meaning or are, at least, difficult to distinguish. Thus transposition of object and participle would not materially alter the meaning of the following quotations. Some of them even seem to have been modelled on the Old-English plan.

Almost the first remarkable thing I observed in Miss Murdstone was her being constantly haunted by a suspicion that the servants had a man secreted somewhere on the premises. Dick. C o p., Ch. IV, 24a. He did not even ride part of the way homewards by the side of his friend's carriage. He had some other party arranged for that afternoon. Thack, Virg, Ch. XXXV, 361.

From Mr. Warrington I could have nothing concealed henceforth, and spoke freely to him. ib, Ch. XXXVI 371.

Also such a construction as the following, in which a break may be observed before the participle, instead of after it, as in the preceding quotations, may have operated towards establishing the modern practice: