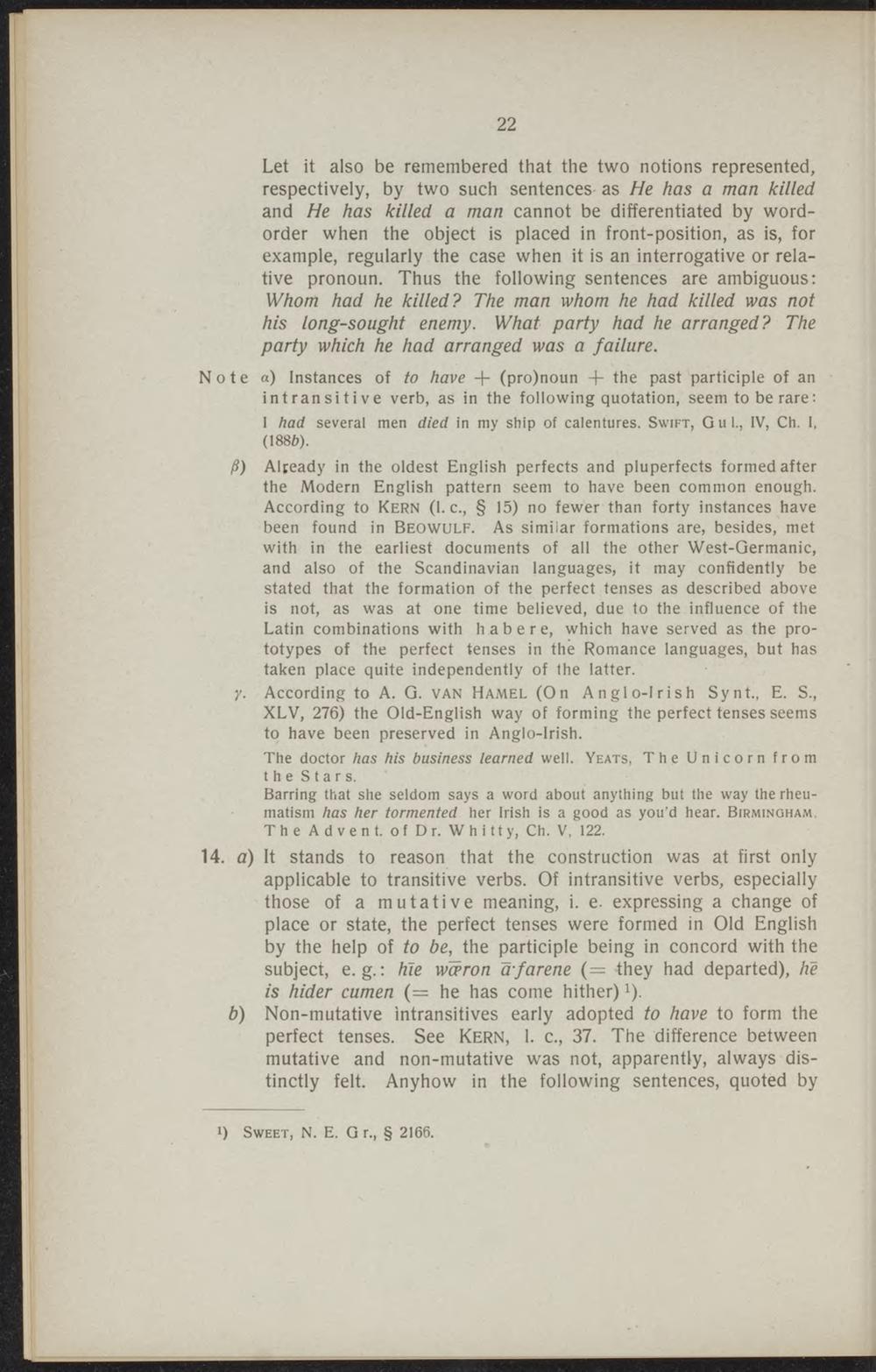 Let it also be remembered that the two notions represented, respectively, by two such sentences- as He has a man killed and He has killed a man cannot be differentiated by wordorder when the object is placed in front-position, as is, for example, regularly the case when it is an interrogative or relative pronoun. Thus the following sentences are ambiguous: Whom had he killed? The man whom he had killed was not his long-sought enemy. What party had he arranged? The party which he had arranged was a failure.

Note a) Instances of to have + (pro)noun + the past participle of an intransitive verb, as in the following quotation, seem toberare:

/ff) Aljeady in the oldest English perfects and pluperfects formed after the Modern English pattern seem to have been common enough. According to Kern (1. c, § 15) no fewer than forty instances have been found in Beowulf. As similar formations are, besides, met with in the earliest documents of all the other West-Germanic, and also of the Scandinavian languages, it may confidently be stated that the formation of the perfect tenses as described above is not, as was at one time believed, due to the influence of the Latin combinations with h a b e r e, which have served as the prototypes of the perfect tenses in the Romance languages, but has taken place quite independently of the latter.

y. According to A. G. van Hamel (On Anglo-Irish Synt., E. S, XLV, 276) the Old-English way of forming the perfect tenses seems to have been preserved in Anglo-Irish.

The doctor has his business learned well. Yeats, The Unicorn from the Stars.

Barring that she seldom says a word about anything but the way therheu' • matism has her tormented her Irish is a good as you'd hear. Birminoham, The Advent, of D r. Whitty, Ch. V, 122.

14. a) It stands to reason that the construction was at first only applicable to transitive verbs. Of intransitive verbs, especially those of a mutative meaning, i. e- expressing a change of place or state, the perfect tenses were formed in Old English by the help of to be, the participle being in concord with the subject, e. g.: hie wcêron a farene (= they had departed), he is hider cumen (= he has come hither)l). b) Non-mutative intransitives early adopted to have to form the perfect tenses. See Kern, i. c, 37. The difference between mutative and non-mutative was not, apparently, always distinctly feit. Anyhow in the following sentences, quoted by