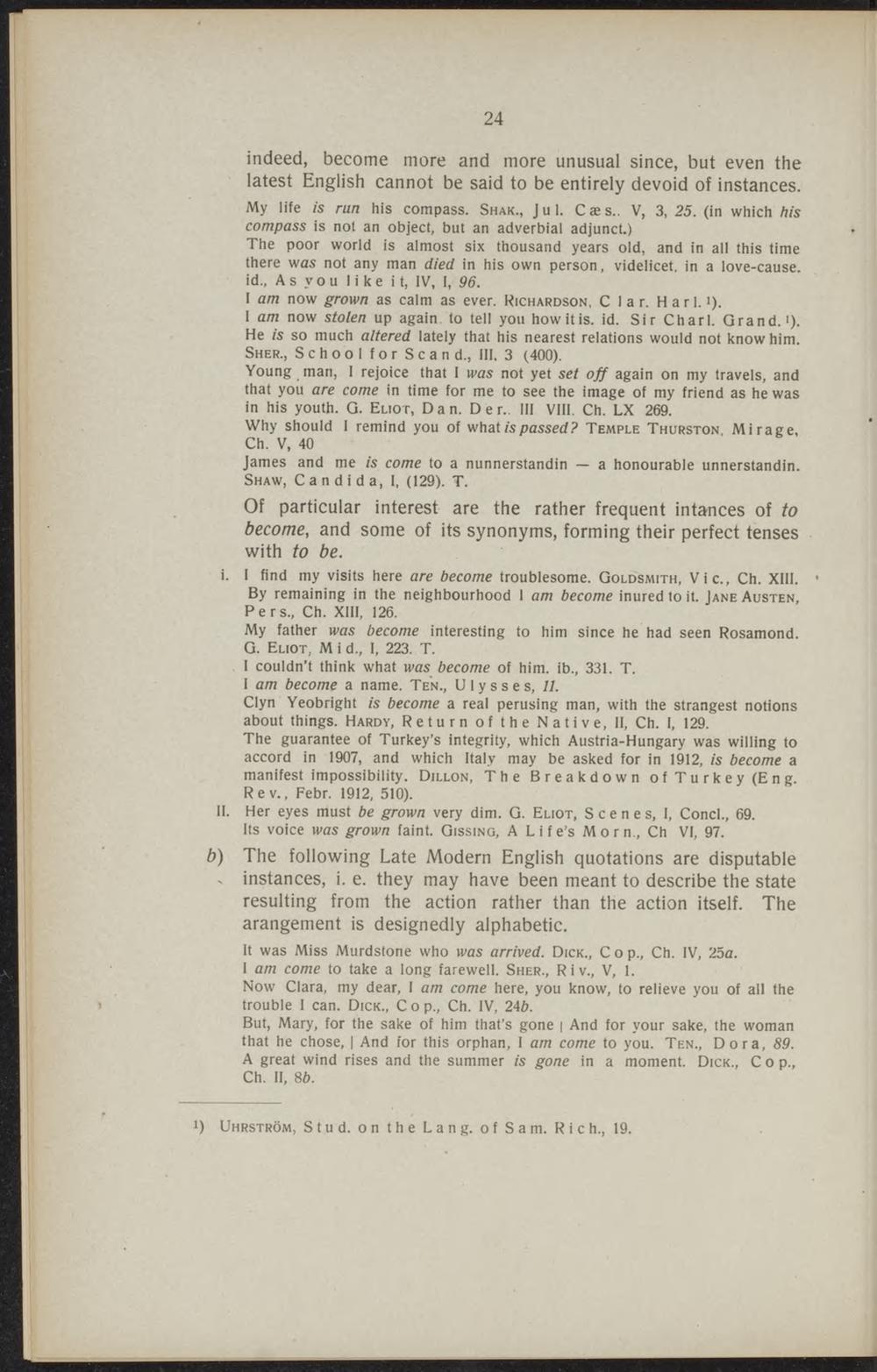 indeed, become more and more unusual since, but even the latest English cannot be said to be entirely devoid of instances. My life is run his compass. Shak, Jul. Caes.. V, 3, 25. (in which his compass is nol an object, but an adverbial adjunct.) The poor world is almost six thousand years old, and in all this time there was not any man died in his own person, videlicet, in a love-cause. id., As you 1 i k e i t, IV, I, 96.

Young man, I rejoice that I was not yet set off again on my travels, and that you are come in time for me to see the image of my friend as he was in his youth. G. Eliot, Dan. Der.. III VIII. Ch. LX 269. Why should I remind you of what is passed? Temple Thurston, Mi rage, Ch. V, 40

Of particular interest are the rather frequent intances of to become, and some of its synonyms, forming their perfect tenses with to be.

i. I find my visits here are become troublesome. Goldsmith, Vic, Ch. XIII. By remaining in the neighbourhood 1 am become inuredtoit. Jane Austen, Pers, Ch. XIII, 126.

My father was become interesting to him since he had seen Rosamond. G. Eliot, M i d, L 223. T.

Clyn Yeobright is become a real perusing man, with the strangest notions about things. Hardy, Return of the Native, II, Ch. I, 129. The guarantee of Turkey's integrity, which Austria-Hungary was willing to accord in 1907, and which Italy may be asked for in 1912, is become a manifest impossibility. Dillon, The Breakdown of Turkey (Eng. Rev., Febr. 1912, 510). II. Her eyes must be grown very dim. G. Eliot, Scènes, I, Concl, 69. Its voice was grown faint. Gissing, A Life's Mom., Ch VI, 97.

6) The following Late Modern English quotations are disputable . instances, i. e. they may have been meant to describe the state resulting from the action rather than the action itself. The arangement is designedly alphabetic.

Now Clara, my dear, I am come here, you know, to relieve you of all the