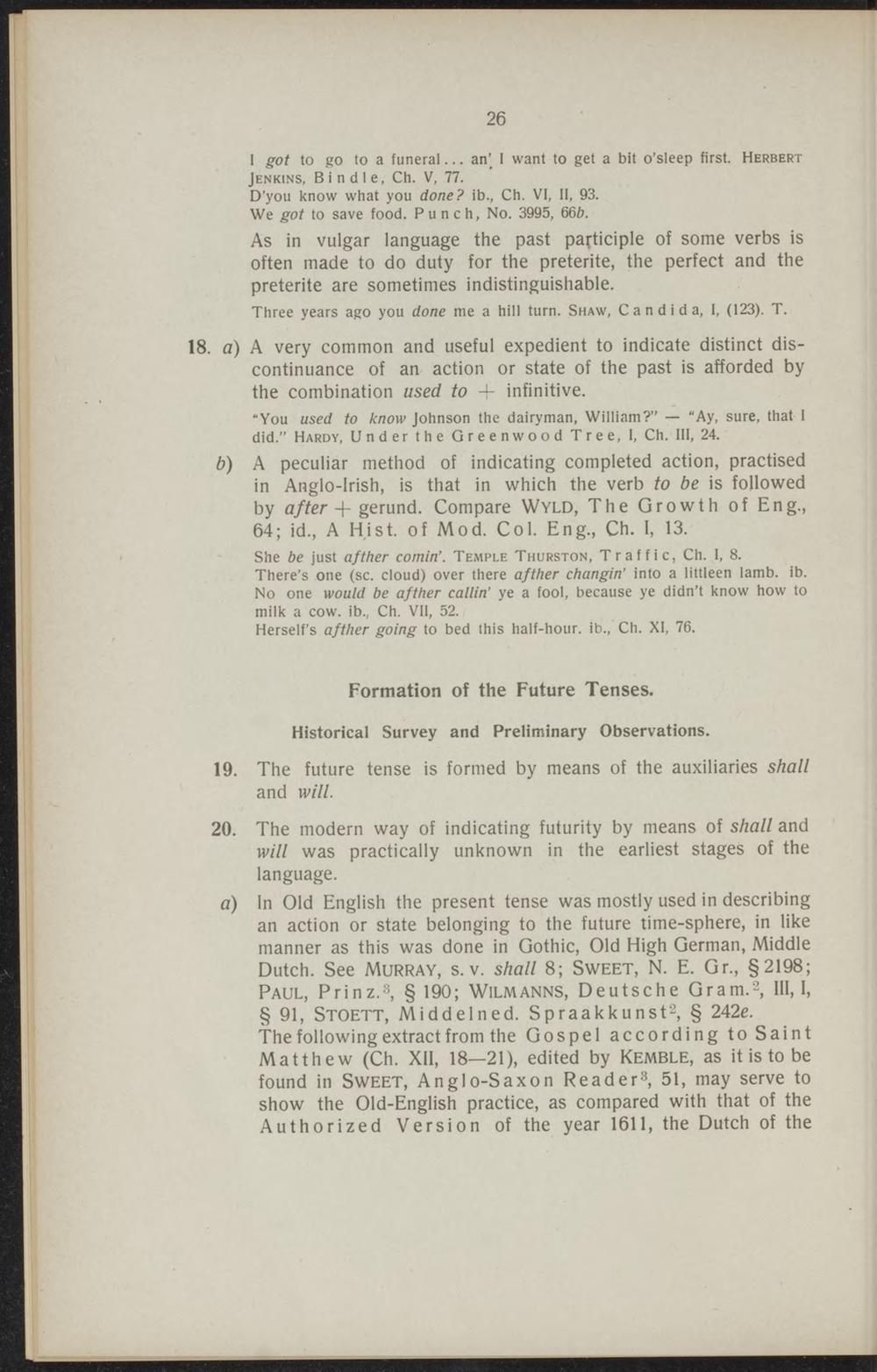 I got to go to a funeral... an' I want to get a bit o'sieep first. Herbert

As in vulgar language the past participle of some verbs is often made to do duty for the preterite, the perfect and the preterite are sometimes indistinguishable. Three years ago you done me a hill turn. Shaw, Candida, i, (123). T.

18. a) A very common and useful expediënt to indicate distinct discontinuance of an action or state of the past is afforded by the combination used to + infinitive.

b) A peculiar method of indicating completed action, practised in Anglo-Irish, is that in which the verb to be is followed by af ter + gerund. Compare Wyld, The Growth of Eng, 64; id, A Hist. of Mod. Col. Eng, Ch. I, 13. She be just afther comin'. Temple Thurston, Traffic, Ch. i, 8. There's one (sc. cloud) over there afther changin' into a littleen lamb. ib. No one would be afther callin' ye a fooi, because ye didn't know how to milk a cow. ib, Ch. vii, 52.

Formation of the Future Tenses. Historical Survey and Preliminary Observations.

19. The future tense is formed by means of the auxiliaries shall and will.

20. The modern way of indicating futurity by means of shall and will was practically unknown in the earliest stages of the language.

a) In Old English the present tense was mostly used in describing an action or state belonging to the future time-sphere, in like manner as this was done in Gothic, Old High German, Middle Dutch. See Murray, s.v. shall 8; Sweet, N. E. Gr, §2198; Paul, Prinz.3, § 190; Wilmanns, Deutsche Gram.2, 111,1, § 91, Stoett, Middelned. Spraakkunst2, § 242e. The following extract from the Gospel according to Saint Matthew (Ch. XII, 18—21), edited by Kemble, as itistobe found in Sweet, Anglo-Saxon Reader3, 51, may serve to show the Old-English practice, as compared with that of the Authorized Version of the year 1611, the Dutch of the