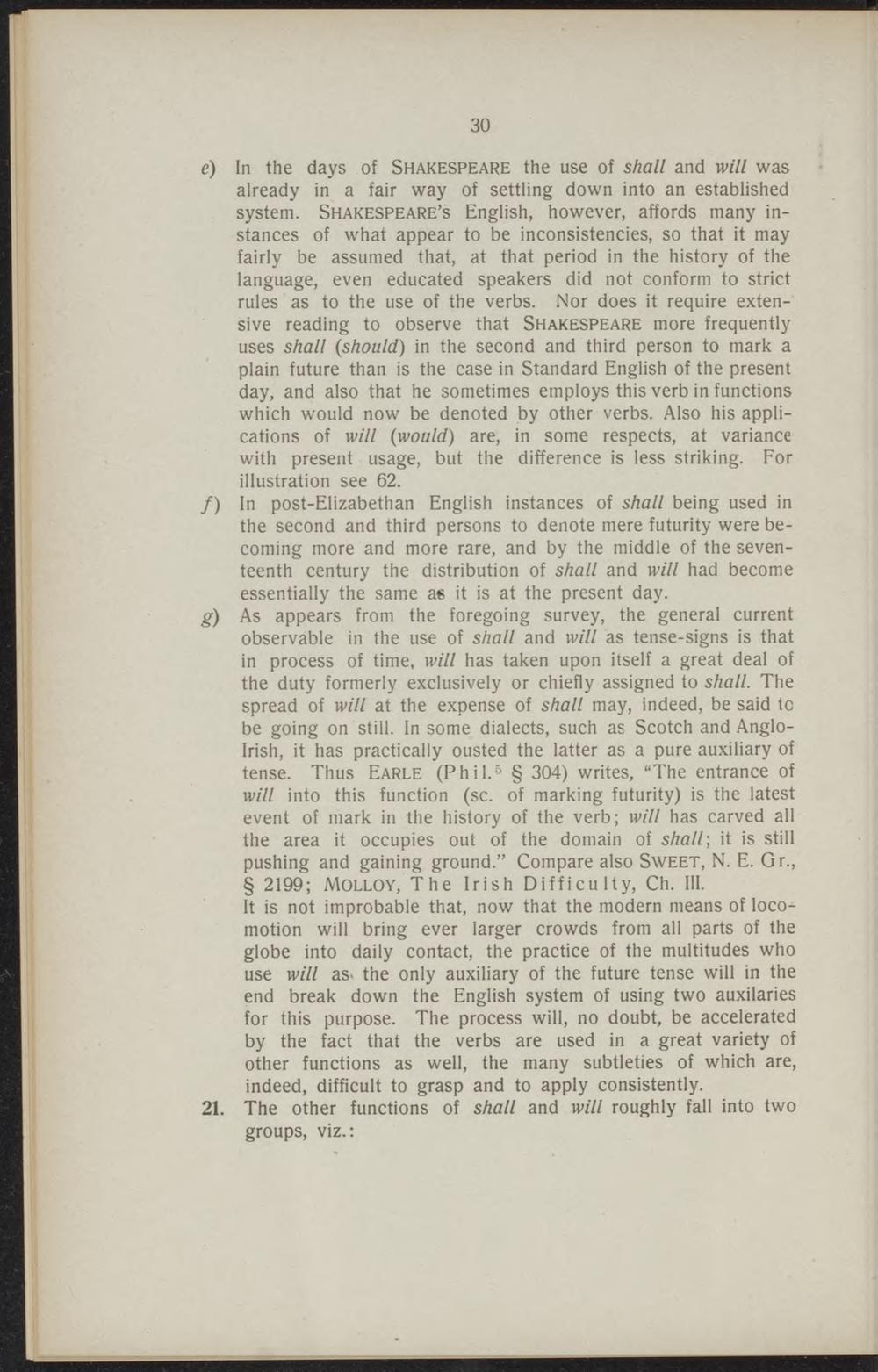 In the days of Shakespeare the use of shall and will was already in a fair way of settling down into an established system. Shakespeare's English, however, affords many instances of what appear to be inconsistencies, so that it may fairly be assumed that, at that period in the history of the language, even educated speakers did not conform to strict rules as to the use of the verbs. Nor does it require extensive reading to observe that Shakespeare more frequently uses shall (should) in the second and third person to mark a plain future than is the case in Standard English of the present day, and also that he sometimes employs this verb in functions which would now be denoted by other verbs. Also his applications of will (would) are, in some respects, at variance with present usage, but the difference is less striking. For illustration see 62.

In post-Elizabethan English instances of shall being used in the second and third persons to denote mere futurity were becoming more and more rare, and by the middle of the seventeenth century the distribution of shall and will had become essentially the same a« it is at the present day. As appears from the foregoing survey, the general current observable in the use of shall and will as tense-signs is that in process of time, will has taken upon itself a great deal of the duty formerly exclusively or chiefly assigned to shall. The spread of will at the expense of shall may, indeed, be said to be going on still. In some dialects, such as Scotch and AngloIrish, it has practicaliy ousted the latter as a pure auxiliary of tense. Thus Earle (Phil.6 § 304) writes, "The entrance of will into this function (sc. of marking futurity) is the latest event of mark in the history of the verb; will lias carved all the area it occupies out of the domain of shall; it is still pushing and gaining ground." Compare also Sweet, N. E. Gr, § 2199; Molloy, The Irish Difficulty, Ch. UI. It is not improbable that, now that the modern means of locomotion will bring ever larger crowds from all parts of the globe into daily contact, the practice of the multitudes who use will as> the only auxiliary of the future tense will in the end break down the English system of using two auxilaries for this purpose. The process will, no doubt, be accelérated by the fact that the verbs are used in a great variety of other functions as well, the many subtleties of which are, indeed, difficult to grasp and to apply consistently. The other functions of shall and will roughly fall into two groups, viz.: