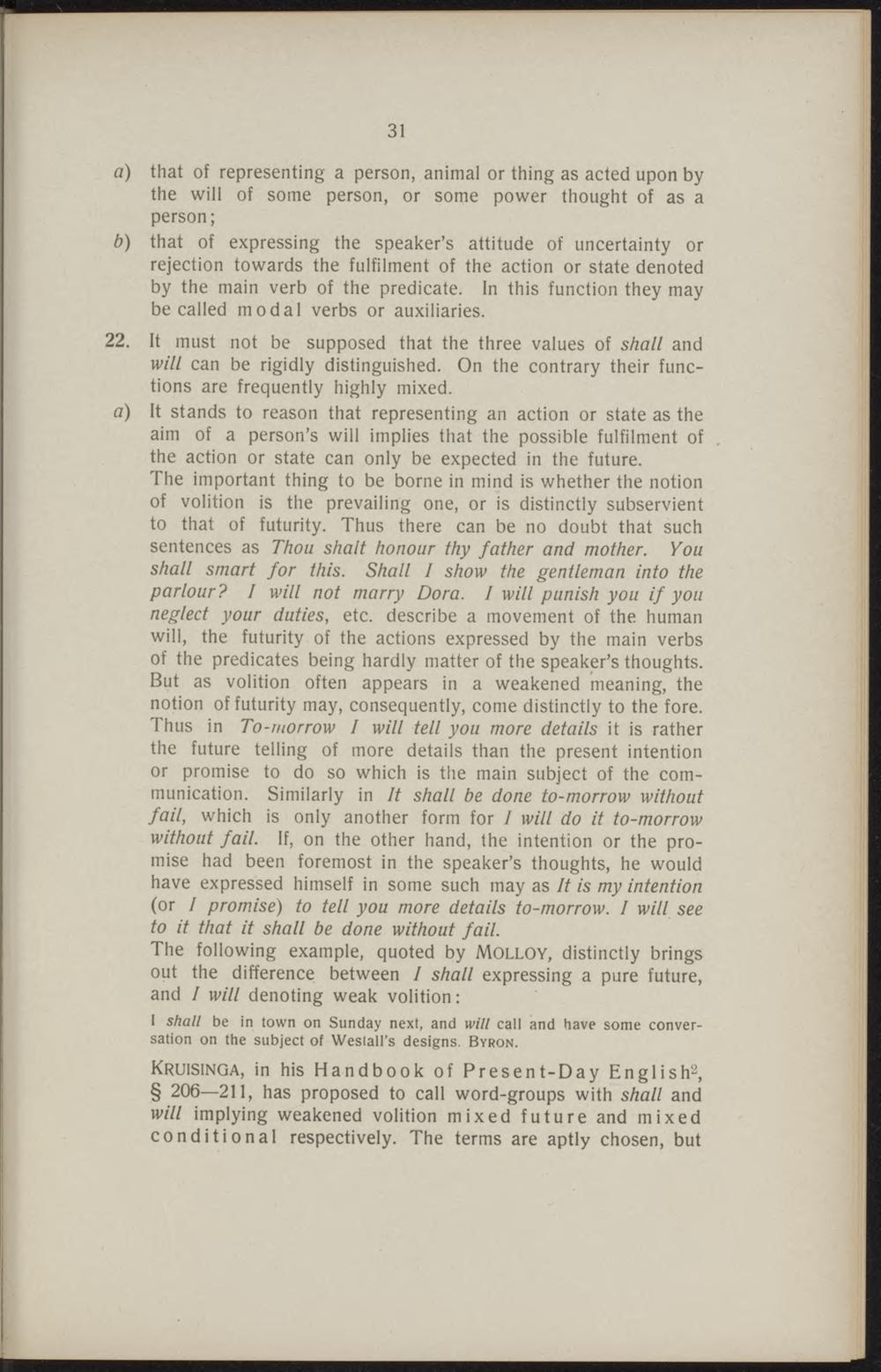 that of representing a person, animal or thing as acted upon by the will of some person, or some power thought of as a person;

that of expressing the speaker's attitude of uncertainty or rejection towards the fulfilment of the action or state denoted by the main verb of the predicate. In this function they may be called modal verbs or auxiliaries.

It must not be supposed that the three values of shall and will can be rigidly distinguished. On the contrary their functions are frequently highly mixed.

It stands to reason that representing an action or state as the aim of a person's will implies that the possible fulfilment of the action or state can only be expected in the future. The important thing to be borne in mind is whether the notion of volition is the prevailing one, or is distinctly subservient to that of futurity. Thus there can be no doubt that such sentences as Thou shalt honour thy father and mother. You shall smart for this. Shall I show the gentleman into the parlour? I will not marry Dora. I will punish you if you neglect your duties, etc. describe a movement of the human will, the futurity of the actions expressed by the main verbs of the predicates being hardly matter of the speaker's thoughts. But as volition often appears in a weakened meaning, the notion of futurity may, consequently, come distinctly to the fore. Thus in To-morrow I will teil you more details it is rather the future telling of more details than the present intention or promise to do so which is the main subject of the communication. Similarly in It shall be done to-morrow without fail, which is only another form for I will do it to-morrow without fail. If, on the other hand, the intention or the promise had been foremost in the speaker's thoughts, he would have expressed himself in some such may as It is my intention (or / promise) to teil you more details to-morrow. I will see to it that it shall be done without fail. The following example, quoted by Molloy, distinctly brings out the difference between / shall expressing a pure future, and I will denoting weak volition:

i shall be in town on Sunday next, and will call and have some conversation on the subject of Westall's designs. Byron.

Kruisinoa, in his Handbook of Present-Day English2, § 206—211, has proposed to call word-groups with shall and will implying weakened volition mixed future and mixed conditional respectively. The terms are aptly chosen, but