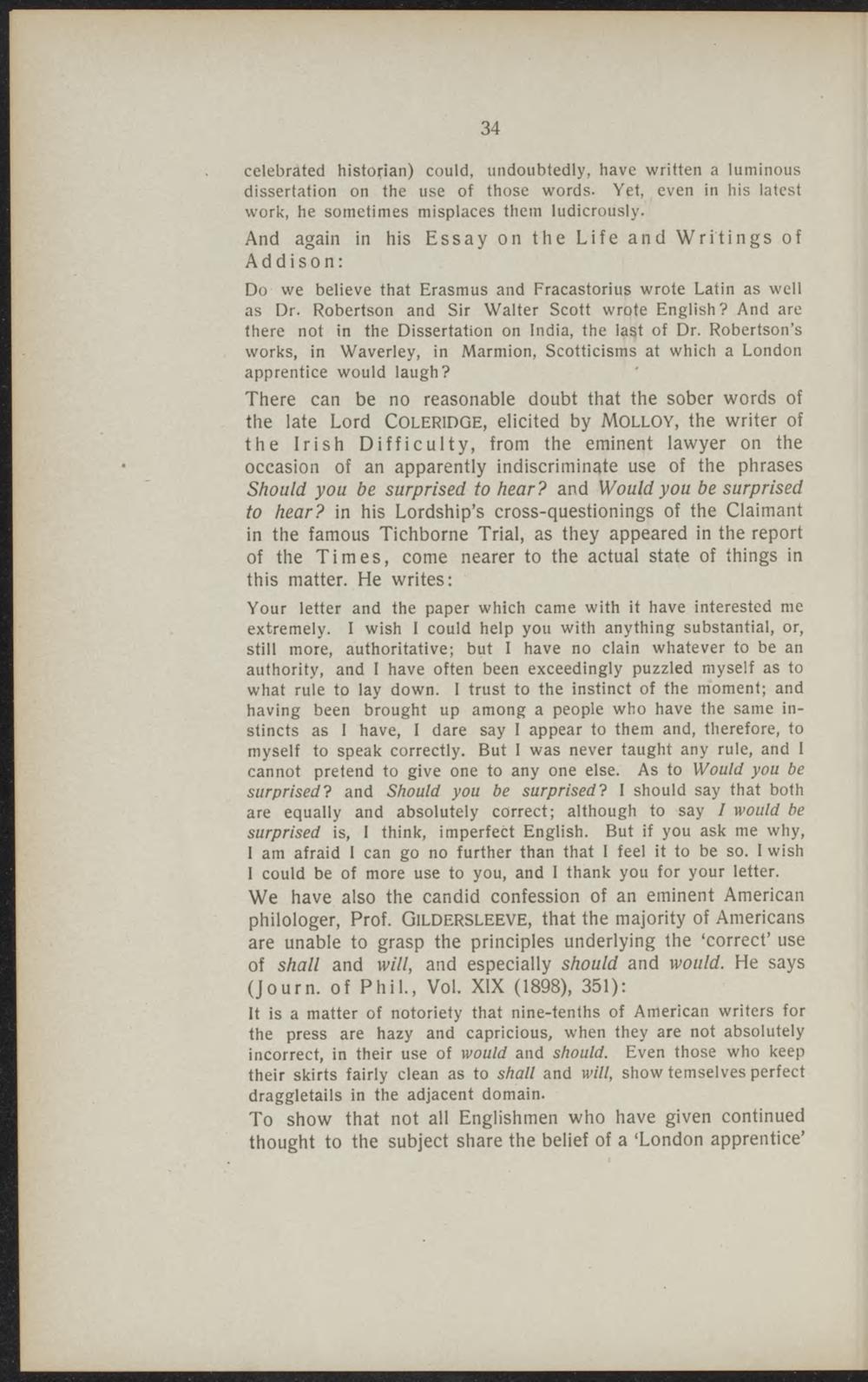 celebrated historian) could, undoubtedly, have written a luminous

dissertation on the use of those words. Yet, even in his latest

work, he sometimes misplaces them ludicrously.

And again in his Essay on the Life and Writings of

Do we believe that Erasmus and Fracastorius wrote Latin as well as Dr. Robertson and Sir Walter Scott wrote English? And are there not in the Dissertation on India, the last of Dr. Robertson's works, in Waverley, in Marmion, Scotticisms at which a London apprentice would laugh?

There can be no reasonable doubt that the sober words of the late Lord Coleridoe, elicited by Molloy, the writer of the Irish Difficulty, from the eminent lawyer on the occasion of an apparently indiscriminate use of the phrases Should you be surprised to hear? and Would you be surprised to hear? in his Lordship's cross-questionings of the Claimant in the famous Tichborne Trial, as they appeared in the report of the Times, come nearer to the actual state of things in this matter. He writes:

Your letter and the paper which came with it have interested me extremely. I wish I could help you with anything substantial, or, still more, authoritative; but I have no clain whatever to be an authority, and I have often been exceedingly puzzled myself as to what rule to lay down. I trust to the instinct of the moment; and having been brought up among a people who have the same instincts as I have, I dare say I appear to them and, therefore, to myself to speak correctly. But I was never taught any rule, and I cannot pretend to give one to any one else. As to Would you be surprised? and Should you be surprised? I should say that both are equally and absoluteiy correct; although to say I would be surprised is, I think, imperfect English. But if you ask me why, I am afraid 1 can go no further than that I feel it to be so. I wish I could be of more use to you, and I thank you for your letter. We have also the candid confession of an eminent American philologer, Prof. Gildersleeve, that the majority of Americans are unable to grasp the principles underlying the 'correct' use of shall and will, and especially should and would. He says (Journ. of Phil., Vol. XIX (1898), 351): It is a matter of notoriety that nine-tenfhs of American writers for the press are hazy and capricious, when they are not absoluteiy incorrect, in their use of would and should. Even those who keep their skirts fairly clean as to shall and will, show temselves perfect draggletails in the adjacent domain.