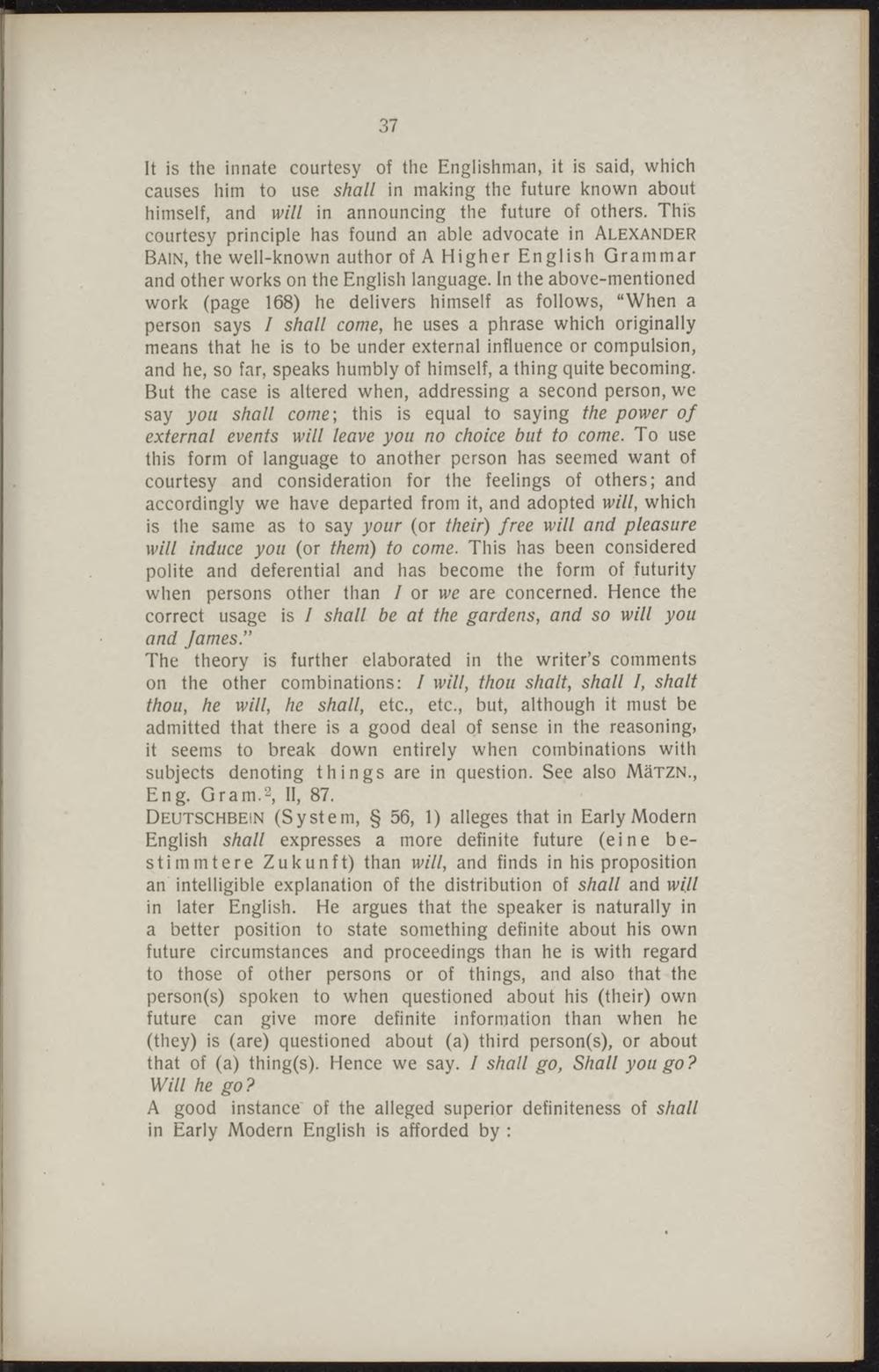 It is the innate courtesy of the Englishman, it is said, which causes him to use shall in making the future known about himself, and will in announcing the future of others. This courtesy principle has found an able advocate in Alexander Bain, the well-known author of A Higher English Grammar and other works on the English language. In the above-mentioned work (page 168) he delivers himself as follows, "When a person says / shall come, he uses a phrase which originally means that he is to be under external influence or compulsion, and he, so far, speaks humbly of himself, a thing quite becoming. But the case is altered when, addressing a second person, we say you shall come; this is equal to saying the power of external events will leave you no choke but to come. To use this form of language to another person has seemed want of courtesy and consideration for the feeiings of others; and accordingly we have departed from it, and adopted will, which is the same as to say your (or their) free will and pleasure will induce you (or them) to come. This has been considered polite and deferential and has become the form of futurity when persons other than / or we are concerned. Hence the correct usage is / shall be at the gardens, and so will you and fames."

The theory is further elaborated in the writer's comments on the other combinations: / will, thou shalt, shall I, shalt thou, he will, he shall, etc, etc, but, although it must be admitted that there is a good deal of sense in the reasoning, it seems to break down entirely when combinations with subjects denoting things are in question. See also MaTZN, Eng. Gram.2, II, 87.

Deutschbein (System, § 56, 1) alleges that in Early Modern English shall expresses a more definite future (eine bestimmtere Zukunft) than will, and finds in his proposition an intelligible explanation of the distribution of shall and will in later English. He argues that the speaker is naturally in a better position to state something definite about his own future circumstances and proceedings than he is with regard to those of other persons or of things, and also that the person(s) spoken to when questioned about his (their) own future can give more definite information than when he (they) is (are) questioned about (a) third person(s), or about that of (a) thing(s). Hence we say. / shall go, Shall you go? Will he go?

A good instance' of the alleged superior definiteness of shall in Early Modern English is afforded by: