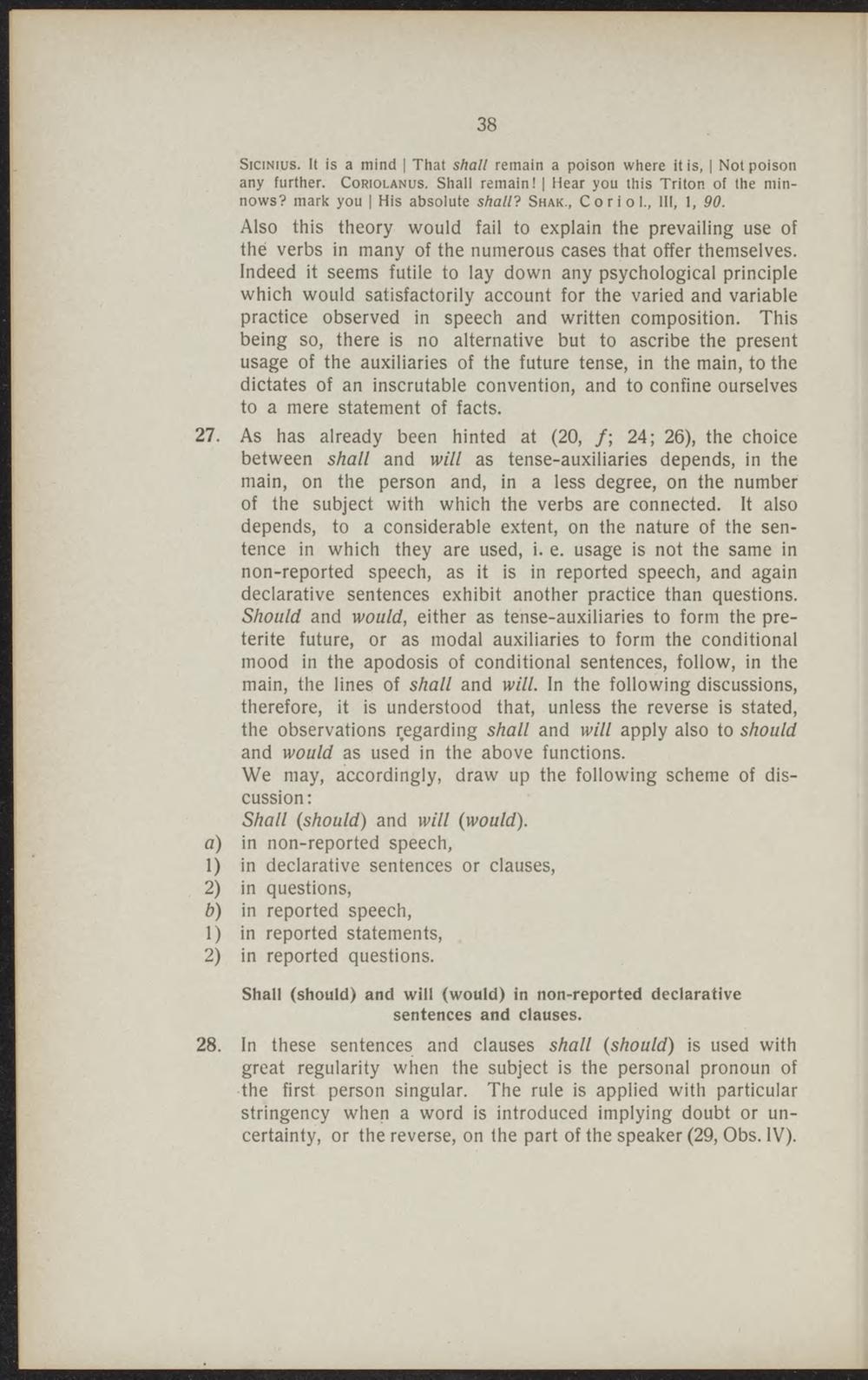 SiciNius.lt is a mind | That shall remain a poison where itis, | Notpoison any further. Coriolanus. Shall remain I | Hear you this Triton of the minnows? mark you | His absolute shall? Shak, Coriol, III, 1, 90.

Also this theory would fail to explain the prevailing use of the verbs in many of the numerous cases that offer themselves. Indeed it seems futile to lay down any psychological principle which would satisfactorily account for the varied and variable practice observed in speech and written composition. This being so, there is no alternative but to ascribe the present usage of the auxiliaries of the future tense, in the main, to the dictates of an inscrutable convention, and to confine ourselves to a mere statement of facts.

27. As has already been hinted at (20, ƒ; 24; 26), the choice between shall and will as tense-auxiliaries depends, in the main, on the person and, in a less degree, on the number of the subject with which the verbs are connected. It also depends, to a considerable extent, on the nature of the sentence in which they are used, i. e. usage is not the same in non-reported speech, as it is in reported speech, and again declarative sentences exhibit another practice than questions. Should and would, either as ténse-auxiliaries to form the preterite future, or as modal auxiliaries to form the conditional mood in the apodosis of conditional sentences, follow, in the main, the lines of shall and will. In the following discussions, therefore, it is understood that, unless the reverse is stated, the observations r,egarding shall and will apply also to should and would as used in the above functions.

We may, accordingly, draw up the following scheme of discussion:

Shall (should) and will (would).

a) in non-reported speech,

1) in declarative sentences or clauses,

b) in reported speech,

Shall (should) and will (would) in non-reported declarative sentences and clauses.

28. In these sentences and clauses shall (should) is used with great regularity when the subject is the personal pronoun of the first person singular. The rule is applied with particular stringency when a word is introduced implying doubt or uncertainty, or the reverse, on the part of the speaker (29, Obs. IV).