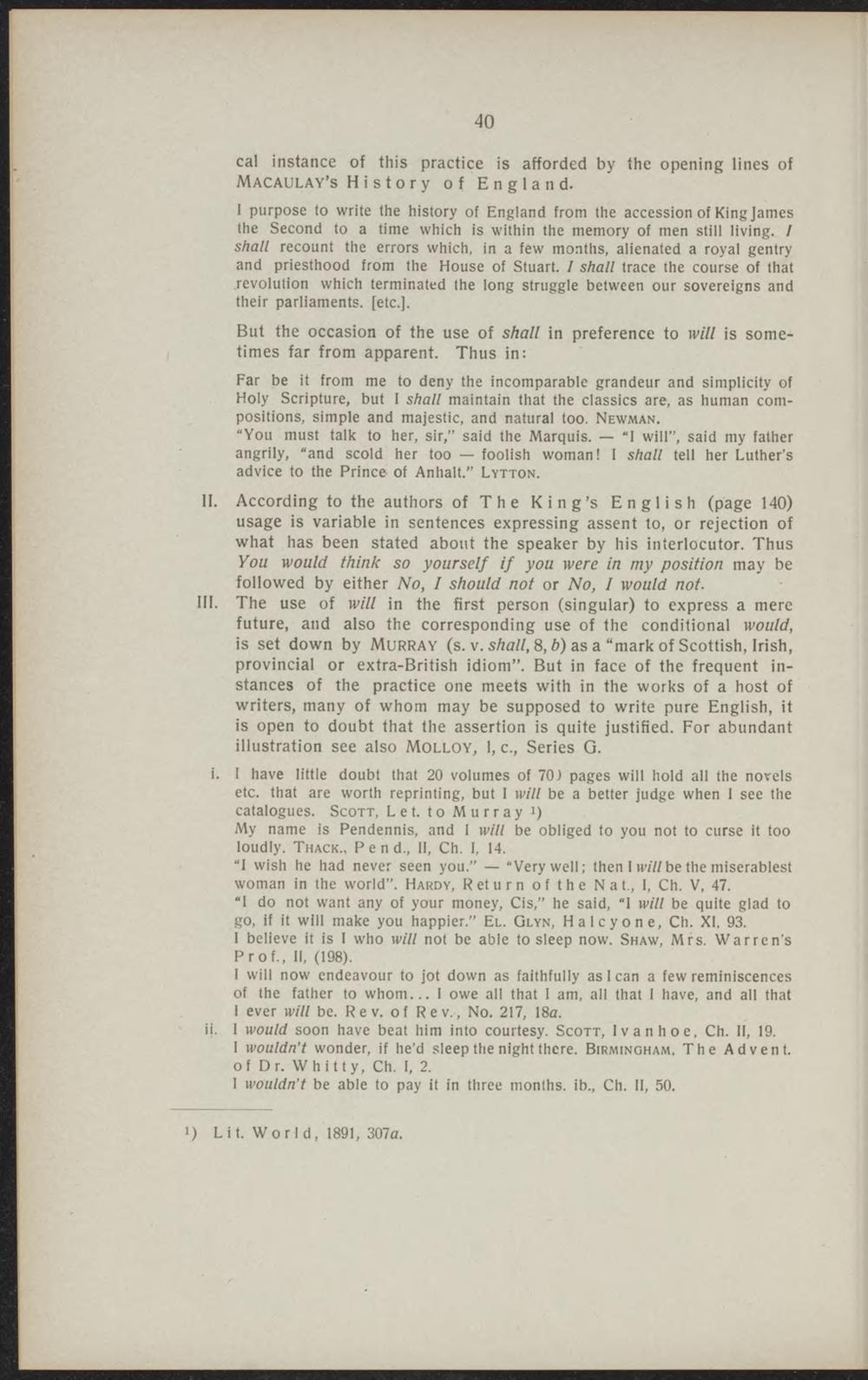 cal instance of this practice is afforded by the opening lines of MACAULAY's History of England.

I purpose to write the history of England from the accession of KingJames the Second to a time which is within the memory of men still living. / shall recount the errors which, in a few months, alienated a royal gentry and priesthood from the House of Stuart. / shall tracé the course of that revolution which terminated the long struggle between our sovereigns and their parliaments. [etc.].

But the occasion of the use of shall in preference to will is sometimes far from apparent. Thus in:

Far be it from me to deny the incomparable grandeur and simplicity of Holy Scripture, but i shall maintain that the classics are, as human compositions, simple and majestic, and natural too. Newman. "You must talk to her, sir," said the Marquis. — "I will", said my father angrily, "and scold her too — foolish woman I I shall teil her Luther's advice to the Prince of Anhalt." Lytton.

II. According to the authors of The King's English (page 140) usage is variable in sentences expressing assent to, or rejection of what has been stated about the speaker by his interlocutor. Thus You would think so yourself if you were in my position may be followed by either No, I should not or No, I would not.

III. The use of will in the first person (singular) to express a mere future, and also the corresponding use of the conditional would, is set down by Murray (s. v. shall, 8, b) as a "mark of Scottish, Irish, provincial or extra-British idiom". But in face of the frequent instances of the practice one meets with in the works of a host of writers, many of whom may be supposed to write pure English, it is open to doubt that the assertion is quite justified. For abundant illustration see also Molloy, 1, c. Series G.

i. I have little doubt that 20 volumes of 70) pages will hold all the novels etc. that are worth reprinting, but I will be a better judge when 1 see the catalogues. Scott, Let. to Murray 1)

"I wish he had never seen you." — "Very well; then I will be the miserablest

I believe it is I who will not be able to sleep now. Shaw, Mrs. Warren's