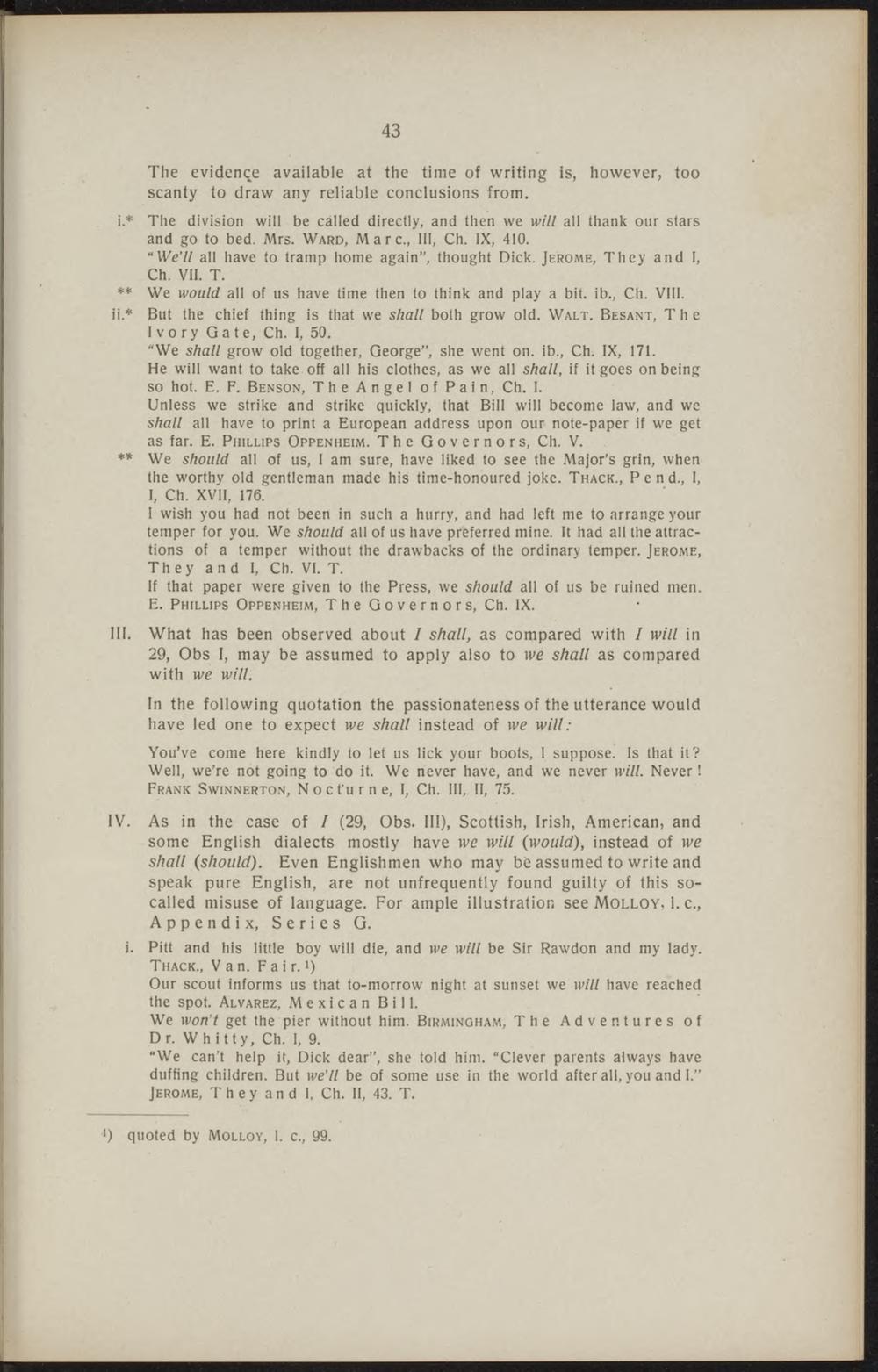 The evidenqe available at the time of writing is, however, too scanty to draw any reliable conclusions from.

"We shall grow old together, George", she went on. ib, Ch. IX, 171. He will want to take off all his clothes, as we all shall, if it goes on being so hot. E. F. Benson, The Angel of Pain, Ch. f. Unless we strike and strike quickly, that Bill will become law, and we shall all have to print a European address upon our note-paper if we get as far. E. Phillips Oppenheim. The Governors, Ch. V. ** We should all of us, I am sure, have liked to see the Major's grln, when the worthy old gentleman made his time-honoured joke. Thack, P e n d, I, I, Ch. XVII, 176.

I wish you had not been in such a hurry, and had left me to arrange your temper for you. We should all of us have preferred mine. It had all the attractions of a temper without the drawbacks of the ordinary temper. Jerome, They and I, Ch. VI. T.

If that paper were given to the Press, we should all of us be ruined men. E. Phillips Oppenheim, The Governors, Ch. IX.

In the following quotation the passionateness of the utterance would have led one to expect we shall instead of we will:

You've come here kindly to let us lick your boots, I suppose. Is that it? Well, we're not going to do it. We never have, and we never will. Never 1 Frank Swinnerton, Nocfurne, I, Ch. III, II, 75.

IV. As in the case of I (29, Obs. III), Scottish, Irish, American, and some English dialects mostly have we will (would), instead of we shall (should). Even Englishmen who may bè assumed to write and speak pure English, are not unfrequently found guilty of this socalled misuse of language. For ample illustration see Molloy, 1. c. Appendix, Series G.

i. Pitt and his little boy will die, and we will be Sir Rawdon and my lady. Thack, Van. Fa i r.i)

Our scout informs us that to-morrow night at sunset we will have reached the spot. Alvarez, Mexican Bill.

We won't get the pier without him. Birminoham, The Adventures of Dr. Whitty, Ch. I, 9.