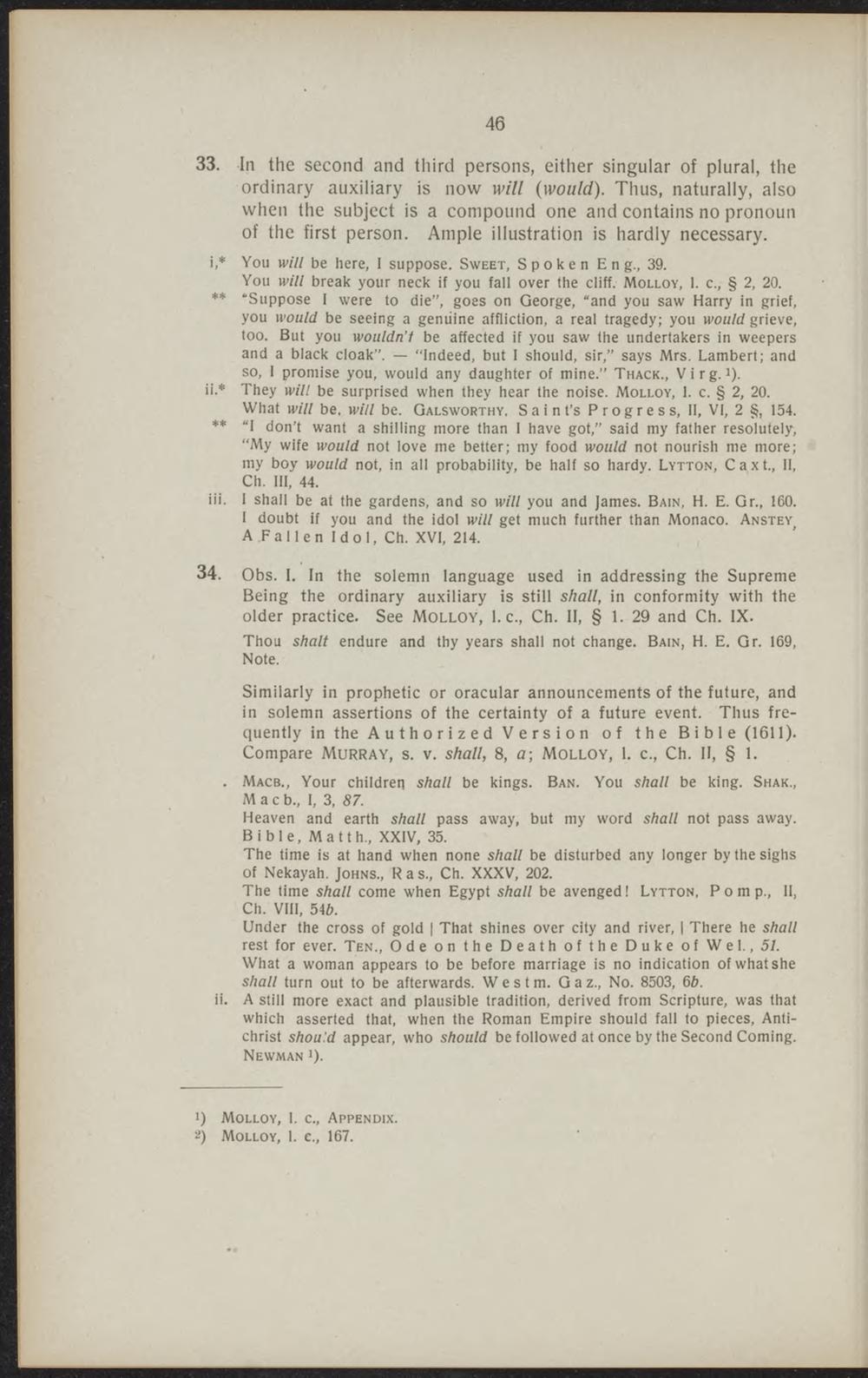 In the second and third persons, either singular of plural, the ordinary auxiliary is now will (would). Thus, naturally, also when the subject is a compound one and contains no pronoun of the first person. Ample illustration is hardly necessary.

"* 'Suppose I were to die", goes on George, "and you saw Harry in grief, you would be seeing a genüine affiiction, a real tragedy; you would grieve, too. But you wouldn't be affected if you saw the undertakers in weepers and a black cloak". — "Indeed, but I should, sir," says Mrs. Lambert; and so, 1 promise you, would any daughter of mine." Thack, Virg.j).

** "I don't want a shilling more than I have got," said my father resolutely, "My wife would not love me better; my food would not nourish me more; my boy would not, in all probability, be half so hardy. Lytton, Caxt, II, Ch. III, 44.

i aouot it you and the idol will get much further than Monaco, anstey APallen Idol, Ch. XVI, 214.

Obs. I. In the solemn language used in addressing the Suprème Being the ordinary auxiliary is still shall, in conformity with the older practice. See Molloy, 1. c, Ch. II, § 1. 29 and Ch. IX.

Similarly in prophetic or oracular announcements of the future, and in solemn assertions of the certainty of a future event. Thus frequently in the Authorized Version of the Bible (1611). Compare Murray, s. v. shall, 8, a; Molloy, 1. c, Ch. II, § 1.

The time is at hand when none shall be disturbed any longer by the sighs of Nekayah. Johns., 'Ras, Ch. XXXV, 202.

The time shall come when Egypt shall be avenged i Lytton, Pomp, II, Ch. VIII, 546.

Under the cross of gold | That shines over city and river, | There he shall rest for ever. Ten, Ode on the Death of the Duke of Wel., 51. What a woman appears to be before marriage is no indication of what she shall turn out to be afterwards. Westm. Gaz, No. 8503, 66.

ii. A still more exact and plausible tradition, derived from Scripture, was that which asserted that, when the Roman Empire should fall to pieces, Antichrist should appear, who should be followed at once by the Second Coming. Newman !).