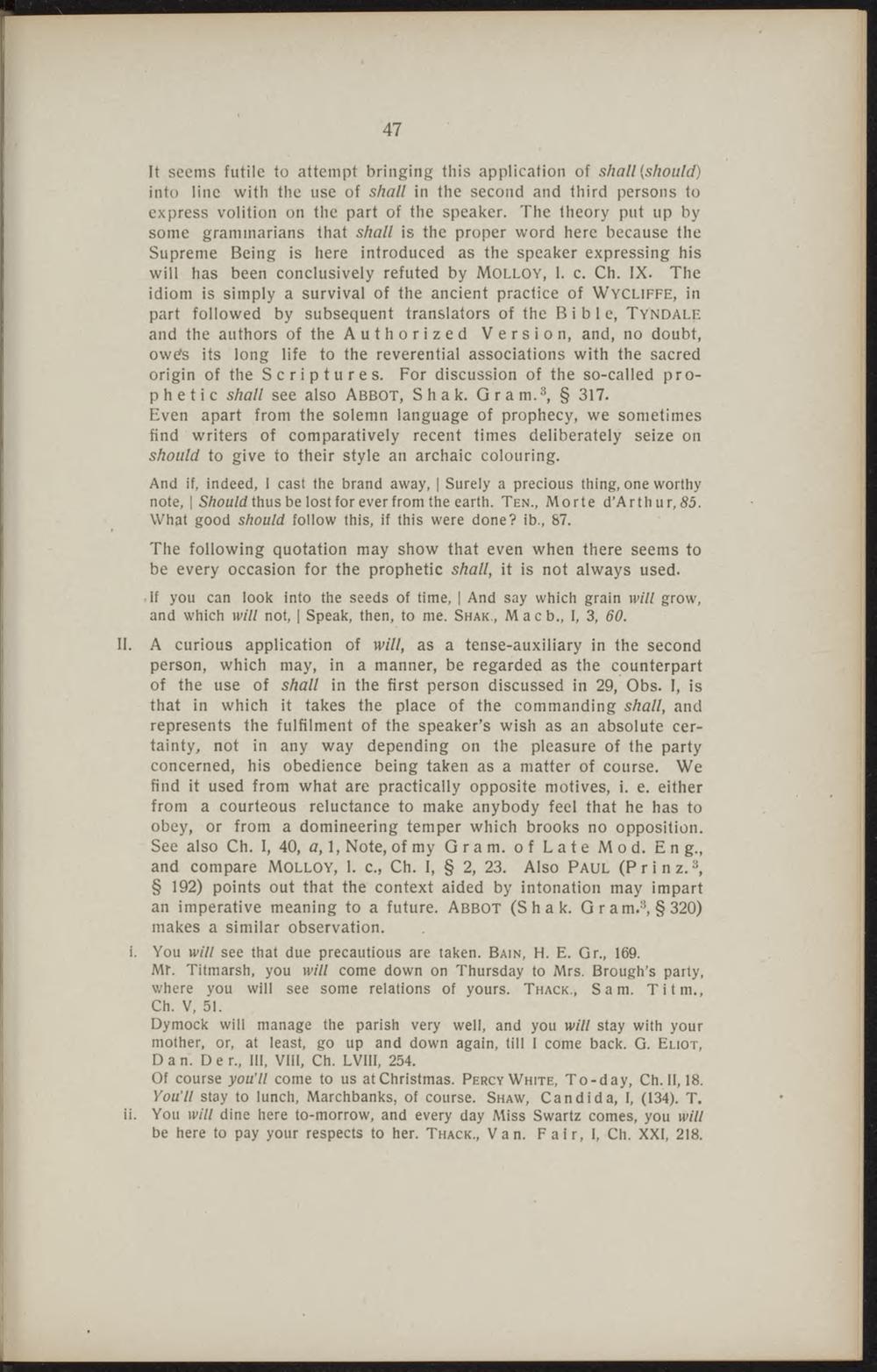 It seems futile to attempt bringing this application of shall (should) into linc with the use of shall in the second and third persons to express volition on the part of the speaker. The theory put up by some grammarians that shall is the proper word here because the Suprème Being is here introduced as the speaker expressing his will has been conclusively refuted by Molloy, 1. c. Ch. IX. The idiom is simply a survival of the ancient practice of Wycliffe, in part followed by subsequent translators of the B i b 1 e, Ty'ndalp and the authors of the Authorized Version, and, no doubt, owés its long life to the reverential associations with the sacred origin of the Scriptures. For discussion of the so-called prophetic shall see also abbot, Shak. Gram.3, § 317. Even apart from the solemn language of prophecy, we sometimes find writers of comparatively recent times deliberately seize on should to give to their style an archaic colouring.

And if, indeed, I cast the brand away, | Surely a precious thing, one worthy note, | Should thus be lost for ever from the earth. Ten, Morte d'Artli u r, 85. What good should follow this, if this were done? ib, 87.

The following quotation may show that even when there seems to be every occasion for the prophetic shall, it is not always used.

A curious application of will, as a tense-auxiliary in the second person, which may, in a manner, be regarded as the counterpart of the use of shall in the first person discussed in 29, Obs. I, is that in which it takes the place of the commanding shall, and represents the fulfilment of the speaker's wish as an absolute certainty, not in any way depending on the pleasure of the party concerned, his obedience being taken as a matter of course. We find it used from what are practically opposite motives, i. e. either from a courteous reluctance to make anybody feel that he has to obey, or from a domineering temper which brooks no opposition. See also Ch. I, 40, a, 1, Note, of my Gram. of Late Mod. Eng, and compare Molloy, 1. c, Ch. I, § 2, 23. Also Paul (Prinz.s, § 192) points out that the context aided by intonation may impart an imperative meaning to a future. Abbot (Shak. Gram.3,§320) makes a simiiar observation.

You will see that due precautious are taken. Bain, H. E. Gr, 169. Mt. Titmarsh, you will come down on Thursday to Mrs. Brough's party, where you will see some relations of yours. Thack, Sam. Titm., Ch. V, 51.

Dymock will manage the parish very well, and you wiU stay with your mother, or, at least, go up and down again, till I come back. G. Eliot, Dan. Der, III, VIII, Ch. LVIII, 254.