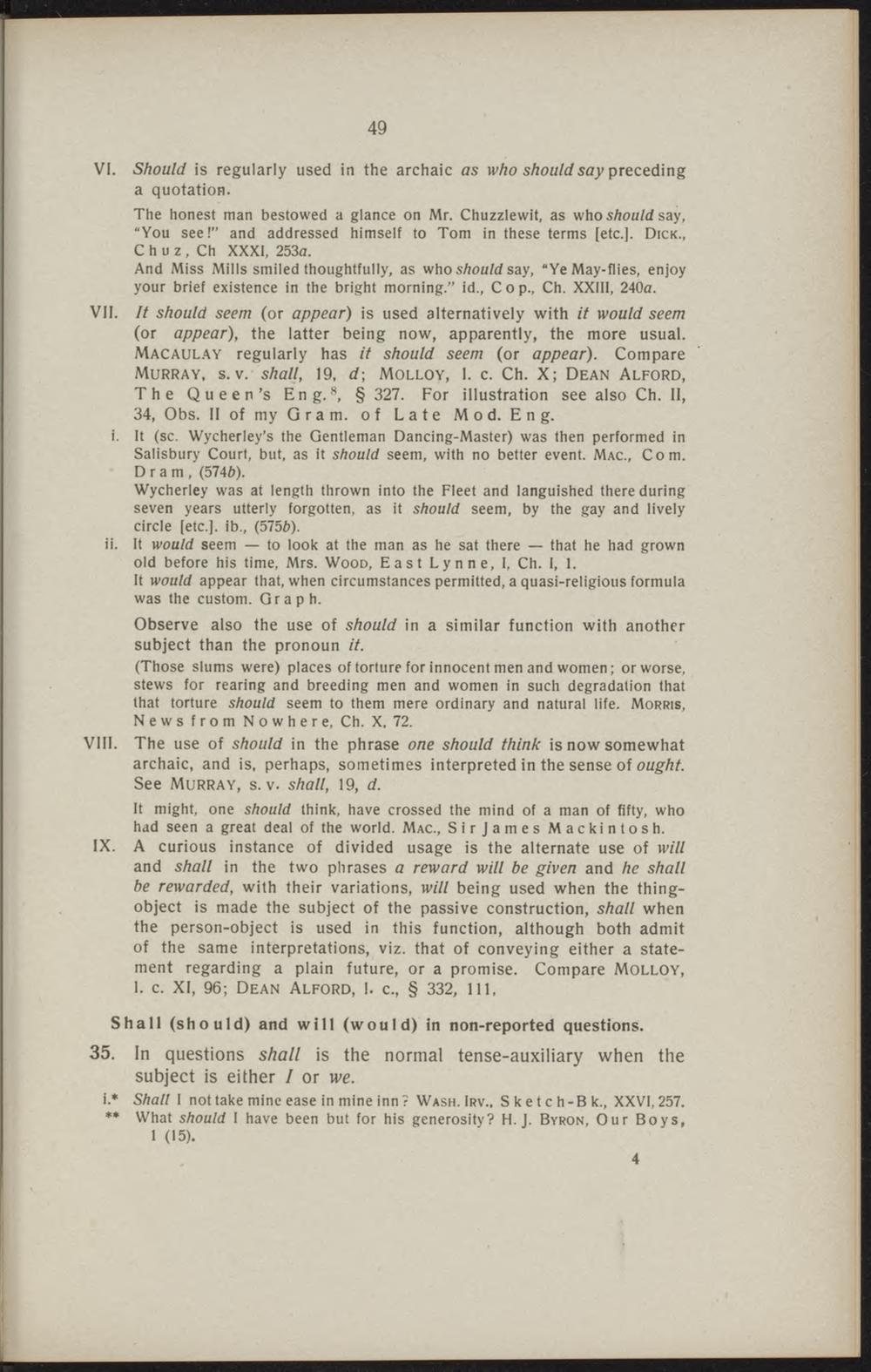 VI. Should is regularly used in the archaic as who should say preceding a quotation.

The honest man bestowed a glance on Mr. Chuzzlewlt, as who should say, "You see!" and addressed himself to Tom in these terms [etc.]. Dick, C h u z , Ch XXXI, 253a.

And Miss Mills smiied thoughtfully, as who should say, "Ye May-flies, enjoy your brief existence in the bright morning." id, C o p, Ch. XXIII, 240a.

i. It (sc Wycherley's the Gentleman Dancing-Master) was then performed in Salisbury Court, but, as it should seem, with no better event. Mac, Com. - Dram, (574Ö).

Wycherley was at length thrown into the Fleet and languished there during seven years utterly forgotten, as it should seem, by the gay and lively circle [etc.], ib, (575ft). ii. It would seem — to look at the man as he sat there — that he had grown old before his time, Mrs. Wood, East Lynne, I, Ch. I, 1. It would appear that, when circumstances permitted, a quasi-religious formula was the custom. G r a p h.

Observe also the use of should in a similar function with another subject than the pronoun it.

(Those slums were) places of torture for innocent men and women; or worse, stews for rearing and breeding men and women in such degradation that that torture should seem to them tnere ordinary and natural life. Morris, News from Nowhere, Ch. X. 72. VIII. The use of should in the phrase one should think is now somewhat archaic, and is, perhaps, sometimes interpreted in the sense of ought. See Murray, s. v. shall, 19, d.

It might, one should think, have crossed the mind of a man of fifty, who had seen a great deal of the world. Mac, Sir James Mackintosh. IX. A curious instance of divided usage is the alternate use of will and shall in the two phrases a reward will be given and he shall be rewarded, with their variations, will being used when the thingobject is made the subject of the passive construction, shall when the person-object is used in this function, although both admit of the same interpretations, viz. that of conveying either a statement regarding a plain future, or a promise. Compare Molloy, 1. c. XI, 96; Dean Alford, 1. c, § 332, lil,

Shall (should) and will (would) in non-reported questions.