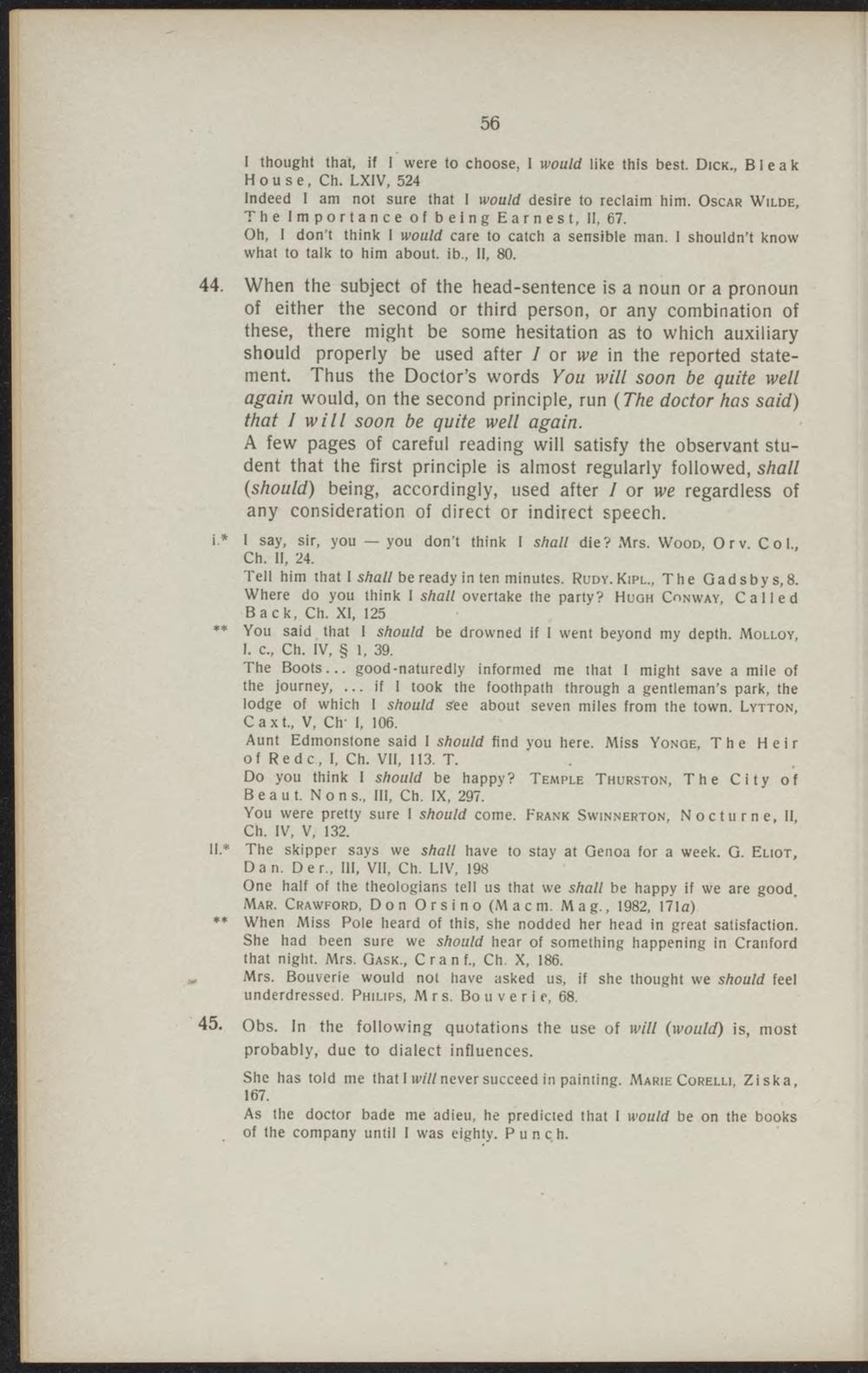 Indeed I am not sure that I would desire to reclaim him. Oscar Wilde, The Importance of being Earnest, H, 67. Oh, I don't think I would care to catch a sensibie man. I shouldn't know what to talk to him about. ib, II, 80.

When the subject of the head-sentence is a noun or a pronoun of either the second or third person, or any combination of these, there might be some hesitation as to which auxiliary should properly be used after / or we in the reported statement. Thus the Doctor's words You will soon be quite well again would, on the second principle, run (The doctor has said) that I will soon be quite well again.

A few pages of careful reading will satisfy the observant student that the first principle is almost regularly followed, shall (should) being, accordingly, used after I or we regardless of any consideration of direct or indirect speech.

Teil him that I shall be ready in ten minutes. Rudy.Kipl, The Gadsbys,8. Where do you think I shall overtake the party? Huoh Conway, Called Back, Ch. XI, 125

The Boots... good-naturedly informed me that I might save a mile of the journey, ... if I took the foothpath through a gentleman's park, the lodge of which I should See about seven miles from the town. Lytton, Caxt, V, Ch' I, 106.

One half of the theologians teil us that we shall be happy if we are good. Mar. Crawford, Don Orsino (Macm. Mag., 1982, 171a) When Miss Pole heard of this, she nodded her head in great satisfaction. She had been sure we should hear of something happening in Cranford that night. Mrs. Gask, Cranf, Ch. X, 186.

Mrs. Bouverie would not have asked us, if she thought we should feel underdressed. Philips, Mrs. Bou ver i e, 68.

Obs. In the following quotations the use of will (would) is, most probably, due to dialect influences.

She has told me that I will never succeed in painting. Marie Corelli, Ziska, 167.

As the doctor bade me adieu, he predicied that I would be on the books of the company until I was eighty. Punch.