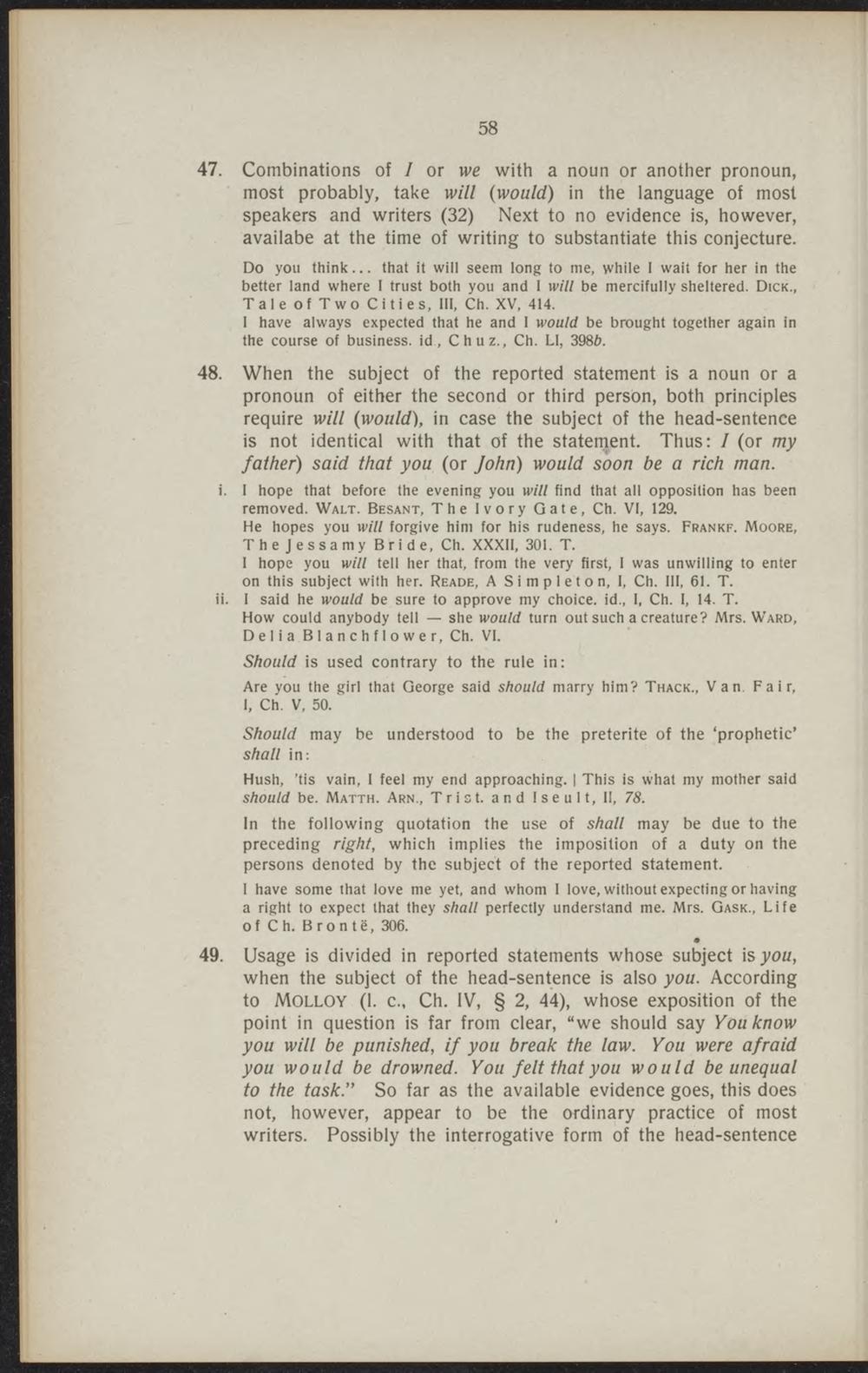 47. Combinations of / or we with a noun or another pronoun, most probably, take will (would) in the language of most speakers and writers (32) Next to no evidence is, however, availabe at the time of writing to substantiate this conjecture.

Do you think... that it will seem long to me, while I wait for her in the better land where I trust both you and I will be mercifuily sheltered. Dick., Tale of Two Cities, HL Ch. XV, 414.

I have always expected that he and I would be brought together again In the course of business, id, Chuz., Ch. LI, 3986.

48. When the subject of the reported statement is a noun or a pronoun of either the second or third person, both principies require will (would), in case the subject of the head-sentence is not identical with that of the statenjent. Thus: / (or my father) said that you (or föhn) would soon be a rich man.

i. I hope that before the evening you will find that ali opposition has been removed. Walt. Besant, The Ivory Qate, Ch. VI, 129.

He hopes you will forgive him for his rudeness, he says. Frankf. Moore, Thejessamy Bride, Ch. XXXII, 301. T.

Should is used contrary to the rule in:

Should may be understood to be the preterite of the 'prophetic' shall in:

In the following quotation the use of shall may be due to the preceding right, which implies the imposition of a duty on the persons denoted by the subject of the reported statement. I have some that love me yet, and whom I love, without expecting or having a right to expect that they shalt perfectly understand me. Mrs. Gask, Life of Ch. Brontë, 306.

49. Usage is divided in reported statements whose subject is you, when the subject of the head-sentence is also you. According to Molloy (1. c, Ch. IV, § 2, 44), whose exposition of the point in question is far from clear, "we should say You know you will be punished, if you break the law. You were afraid you would be drowned. You feit that you would be unequal to the task." So far as the available evidence goes, this does not, however, appear to be the ordinary practice of most writers. Possibly the interrogative form of the head-sentence