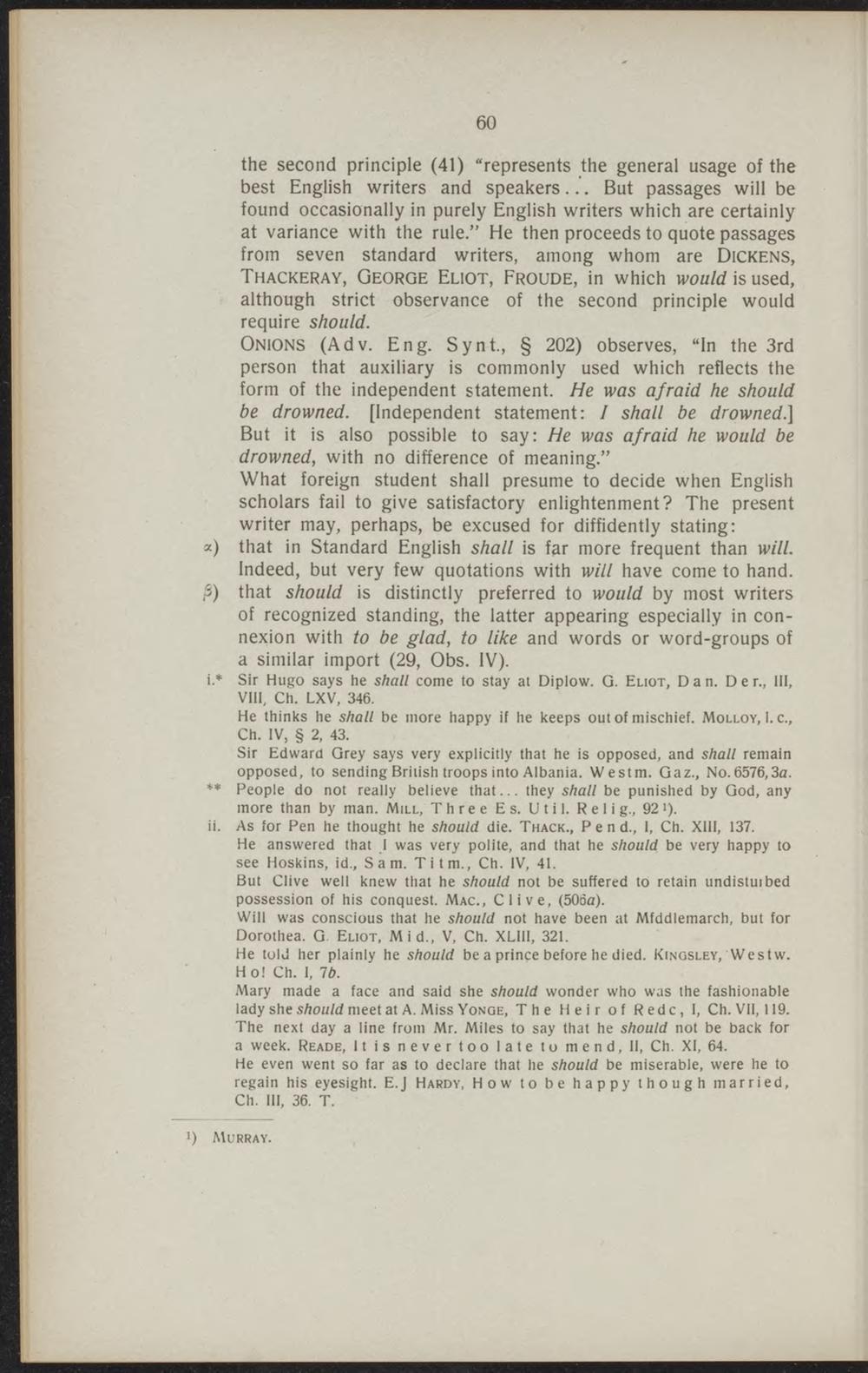 the second principle (41) "represents the general usage of the best English writers and speakers... But passages will be found occasionally in purely English writers which are certainly at variance with the rule." He then proceeds to quote passages from seven Standard writers, among whom are Dickens, Thackeray, George Eliot, Froude, in which would is used, although strict observance of the second principle would require should.

Onions (Adv. Eng. Synt, § 202) observes, "In the 3rd person that auxiliary is commonly used which reflects the form of the independent statement. He was afraid he should be drowned. [Independent statement: / shall be drowned.] But it is also possible to say: He was afraid he would be drowned, with no difference of meaning." What foreign student shall presume to decide when English scholars fail to give satisfactory enlightenment? The present writer may, perhaps, be excused for diffidently stating:

) that in Standard English shall is far more frequent than will. Indeed, but very few quotations with will have come to hand.

) that should is distinctly preferred to would by most writers of recognized standing, the latter appearing especially in connexion with to be glad, to like and words or word-groups of a similar import (29, Obs. IV).

Sir Edward Grey says very explicitly that he is opposed, and shall remain

opposed, to sending Britisn troops into Albania. Westm. Gaz, No.6576,3a. * People do not really believe that... they shall be punished by God, any

He answered that i was very polite, and that he should be very happy to

But Clive well knew that he should not be suffered to retain undistuibed possession of his conquest. Mac, Clive, (506a).

Will was conscious that he should not have been at Mfddlemarch, but for Dorothea. G. Eliot, Mid, v, Ch. xliii, 321.

He told her plainly he should be a prince before he died. Kinosley,'Westw. Ho! Ch. i, 7ö.

Mary made a face and said she should wonder who was the fashionable lady she should meet at A. Miss Yonoe, The Heir of Rede, i, Ch. vii, 119. The next day a line from Mr. Miles to say that he should not be back for a week. Reade, It is never too late to mend, ii, Ch. xi, 64. He even went so far as to declare that he should be miserable, were he to regain his eyesight. E.J Hardy, How to be happy though married, Ch. 111, 36. T.