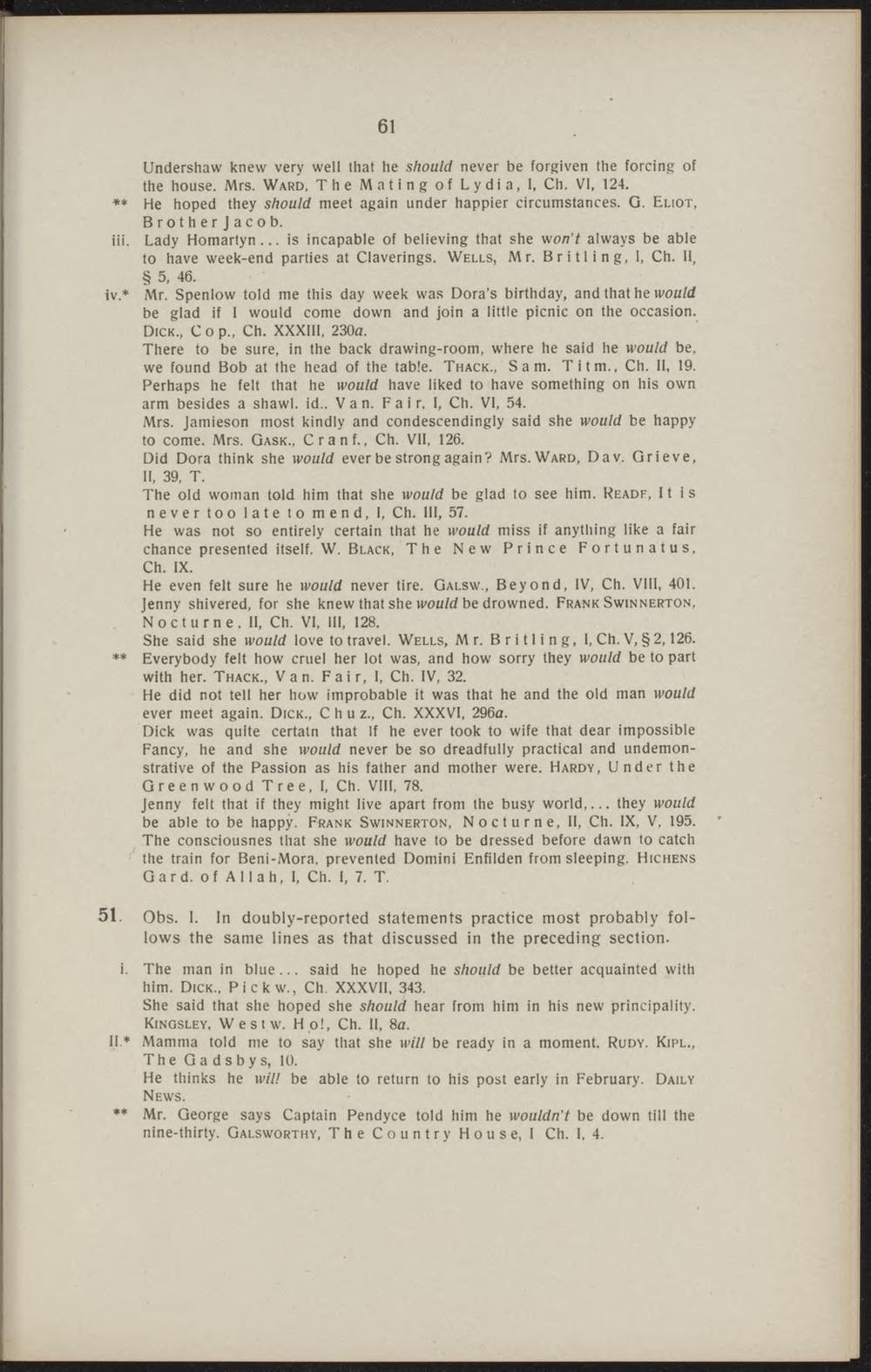 Undershaw knew very well that he should never be forgiven the forcing of the house. Mrs. Ward. The Mating of Lydia, I, Ch. VI, 124. He hoped they should meet again under happier circumstances. G. Eliot, Brother Jacob.

Lady Homartyn... is incapable of believing that she won't always be able to have week-end parties at Claverings. Wells, Mr. Britling, I, Ch. II, § 5, 46.

Mr. Spenlow told me this day week was Dora's birthday, and that he would be glad if I would come down and join a little picnic on the occasion. Dick., C o p„ Ch. XXXIII, 230a.

There to be sure, in the back drawing-room, where he said he would be, we found Bob at the head of the tabte. Thack., Sam. Titm., Ch. II, 19. Perhaps he feit that he would have liked to have something on his own arm besldes a shawl. id.. Van. Fair, I, Ch. VI, 54. Mrs. jamieson most kindly and condescendingly said she would be happy to come. Mrs. Gask., Cranf., Ch. VII, 126.

The old woman told him that she would be glad to see him. Reade, It is never too late to mend, I, Ch. III, 57.

He was not so entirely certain that he would miss if anything like a fair chance presented itself. W. Black, The New Prince Fortunatus, Ch. IX.

He even feit sure he would never tire. Galsw, Beyond, IV, Ch. VIII, 401. Jenny shivered, for she knew that she would be drowned. Frank Swinnerton. Nocturne. II, Ch. VI, III, 128.

He did not teil her how improbable it was that he and the old man would ever meet again. Dick, Chuz, Ch. XXXVI, 296a.

Dick was quite certatn that If he ever took to wife that dear impossible Fancy, he and she would never be so dreadfully practical and undemonstrative of the Passion as his father and mother were. Hardy, Under the Greenwood Tree, I, Ch. VIII, 78.

Jenny feit that if they might live apart from the busy world,... they would be able to be happy. Frank Swinnerton, Nocturne, II, Ch. IX, V, 195. The consciousnes that she would have to be dressed before dawn to catch the train for Beni-Mora, prevented Domini Enfilden from sleeping. Hichens Gard. of Allah, I, Ch. I, 7. T.

Obs. I. In doubly-reported statements practice most probably follows the same lines as that discussed in the preceding section.

The man in blue... said he hoped he should be better acquainted with him. Dick, Pickw., Ch. XXXVII, 343.

She said that she hoped she should hear from him in his new principality. Kinosley, Westw. Ho!, Ch. II, 8a.

Mamma told me to say that she will be ready in a moment. Rudy. Kipl, The Gadsbys, 10.

He thinks he will be able to return to his post early in February. Daily News.