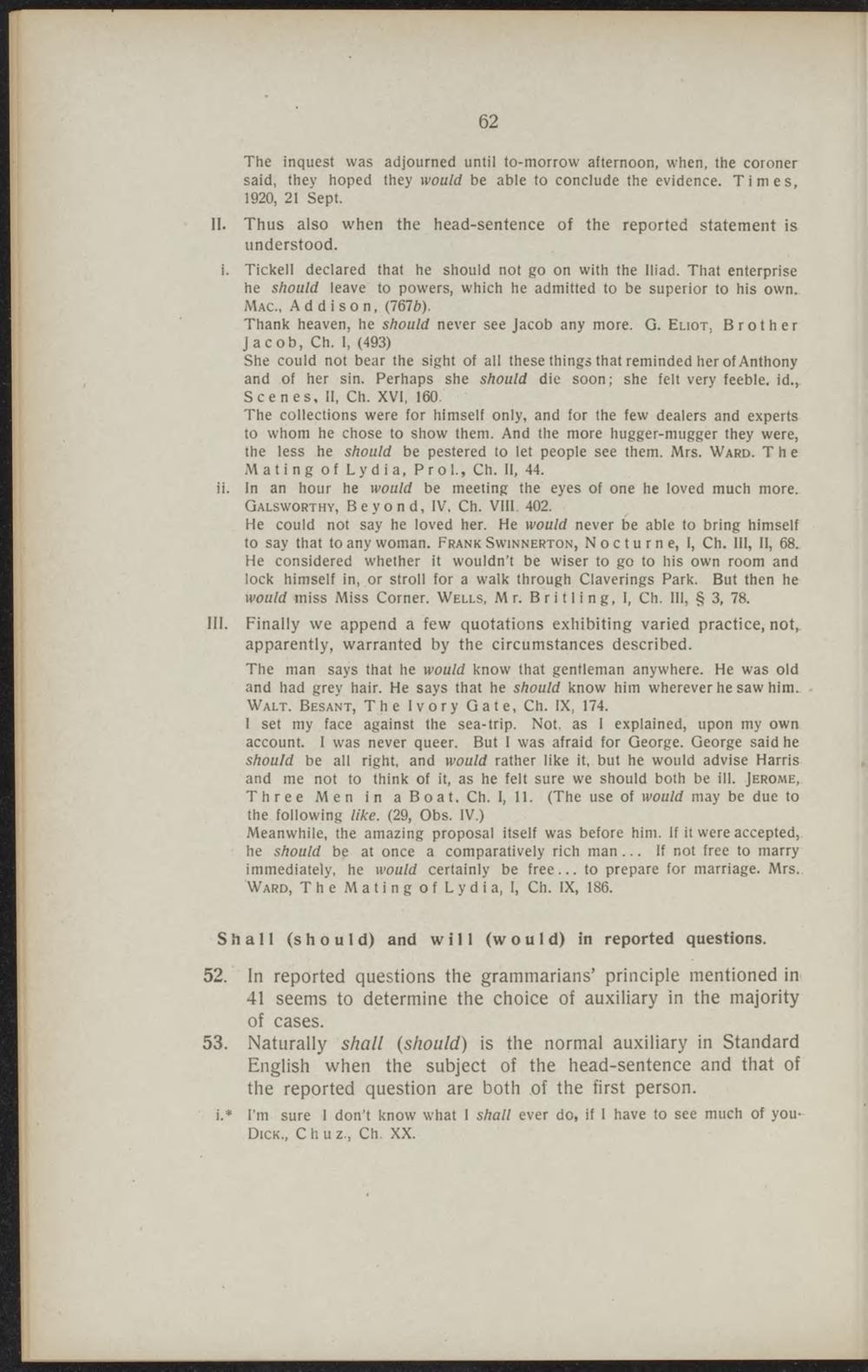 The inquest was adjourned until to-morrow afternoon, when, the coroner said, they hoped they would be able to conclude the evidence. Times, 1920, 21 Sept.

Thus also when the head-sentence of the reported statement is understood.

Tickell declared that he should not go on with the lliad. That enterprise he should leave to powers, which he admitted to be superior to his own. Mac, A d d i s o n, (767e).

She could not bear the sight of all these things that reminded her of Anthony and of her sin. Perhaps she should die soon; she feit very feeble. id. Scènes, II, Ch. XVI, 160.

The collections were for himself only, and for the few dealers and experts to whom he chose to show them. And the more hugger-mugger they were, the less he should be pestered to let people see them. Mrs. Ward. The Mating of Lydia, Prol., Ch. II, 44.

He could not say he loved her. He would never be able to bring himself to say that to any woman. Frank Swinnerton, Nocturne, I, Ch. III, II, 68. He considered whether it wouldn't be wiser to go to his own room and lock himself in, or stroll for a walk through Claverings Park. But then he would miss Miss Corner. Wells, M r. Britling, I, Ch. III, § 3, 78.

Finally we append a few quotations exhibiting varied practice, not, apparently, warranted by the circumstances described. The man says that he would know that gentleman anywhere. He was old and had grey hair. He says that he should know him wherever he saw him. Walt. Besant, The Ivory Gate, Ch. IX, 174.

I set my face against the sea-trip. Not, as I explained, upon my own account. I was never queer. But I was afraid for George. George saidhe should be all right, and would rather like it, but he would advise Harris and me not to think of it, as he feit sure we should both be IN. Jerome,. Three Men in a Boat. Ch. I, 11. (The use of would may be due to the following like. (29, Obs. IV.)

Meanwhile, the amazing proposal itself was before him. If it were accepted, he should be at once a comparatively rich man... If not free to marry immediately, he would certainly be free... to prepare for marriage. Mrs. Ward, T h e M a t i n g o f L y d i a, I, Ch. IX, 186.

hall (should) and will (would) in reported questions.

In reported questions the grammarians' principle mentioned int 41 seems to determine the choice of auxiliary in the majority of cases.

Naturally shall (should) is the normal auxiliary in Standard English when the subject of the head-sentence and that of the reported question are both of the first person. [ I'm sure I don't know what I shall ever do, if I have to see much of youDick, Chuz, Ch. XX.