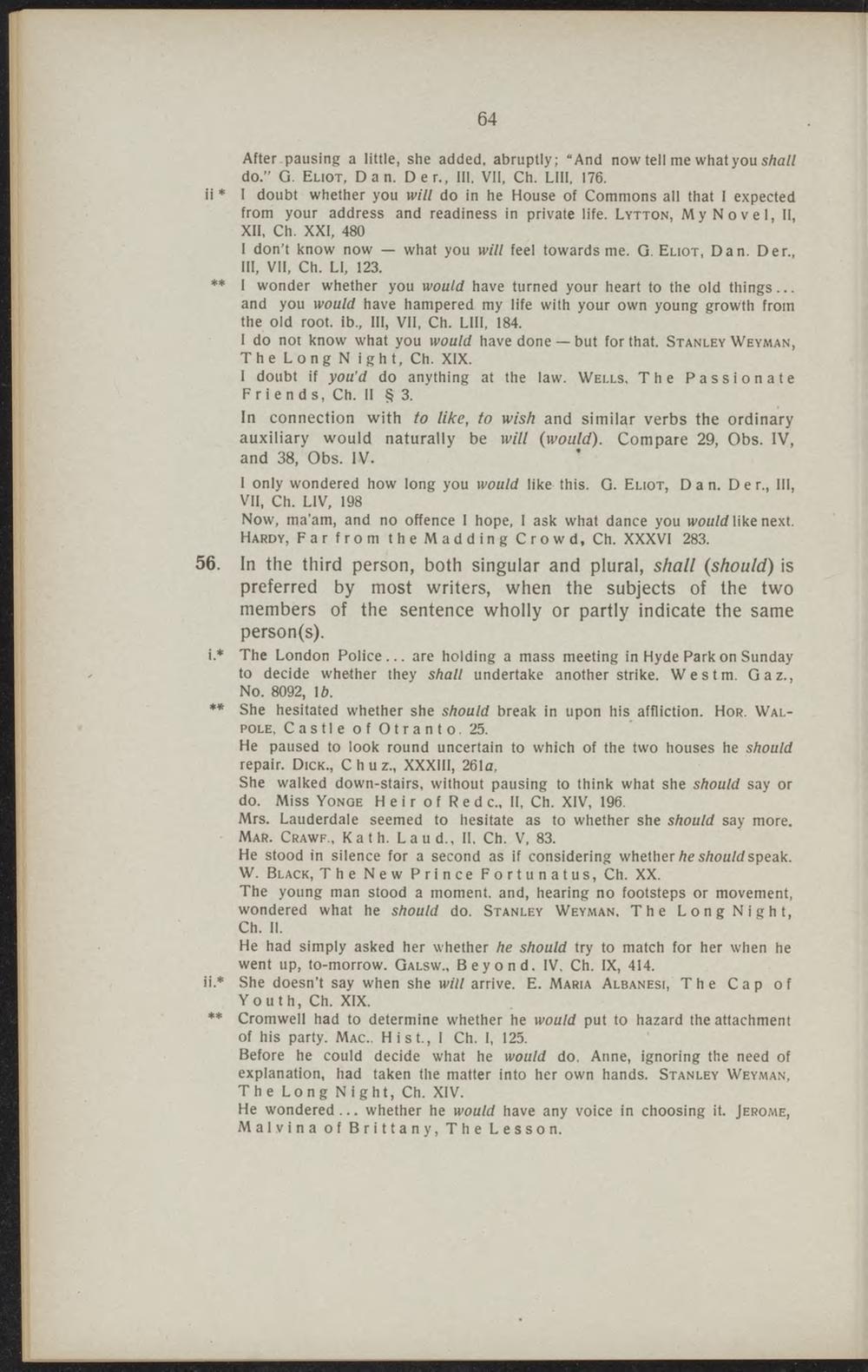 After pausing a little, she added, abruptly; "And now teil me what you shall do." G. Eliot, Dan. Der., III. VII, Ch. LUI, 176. ii * I doubt whether you iw7/ do in he House of Commons all that I expected from your address and readiness in private life. Lytton, MyNovel, II, XII, Ch. XXI, 480

** I wonder whether you would have turned your heart to the old things... and you would have hampered my life with your own young growth from the old root. ib, III, VII, Ch. LUI, 184.

I do not know what you would have done — but for that. Stanley Weyman, TheLongNight, Ch. XIX.

I doubt if you'd do anything at the law. Wells, The Passionate Friends, Ch. II § 3.

In connection with to like, to wish and similar verbs the ordinary auxiliary would naturally be will (would). Compare 29, Obs. IV, and 38, Obs. IV.

Now, ma'am, and no offence I hope, I ask what dance you would like next. Hardy, Far from theMaddingCrowd, Ch. XXXVI 283.

56. In the third person, both singular and plural, shall (should) is preferred by most writers, when the subjects of the two members of the sentence wholly or partly indicate the same person(s).

i* The London Police... are holding a mass meeting in Hyde Park on Sunday to decide whether they shall undertake another strike. Westm. Gaz., No. 8092, lö.

** She hesitated whether she should break in upon his affliction. Hor. Walpole, Castte of Otranto. 25.

He paused to look round uncertain to which of the two houses he should repair. Dick, Chuz, XXXIII, 261a,

He stood in silence for a second as if considering whether he should speak. W. Black, The New Prince Fortunatus, Ch. XX. The young man stood a moment, and, hearing no footsteps or movement, wondered what he should do. Stanley Weyman, The Long Night, Ch. II.

He had simply asked her whether he should try to match for her when he went up, to-morrow. Galsw, Beyond. IV. Ch. IX, 414. ii.* She doesn't say when she will arrivé. E. Maria Albanesi, The Cap of Youth, Ch. XIX.

** Cromwell had to determine whether he would put to hazard the attachment of his party. Mac. Hist, I Ch. I, 125.

Before he could decide what he would do, Anne, ignoring the need of explanation, had taken the matter into her own hands. Stanley Weyman, The Long Night, Ch. XIV.

He wondered ... whether he would have any vdice in choosing it. Jerome, Malvina of Brittany, The Lesson.