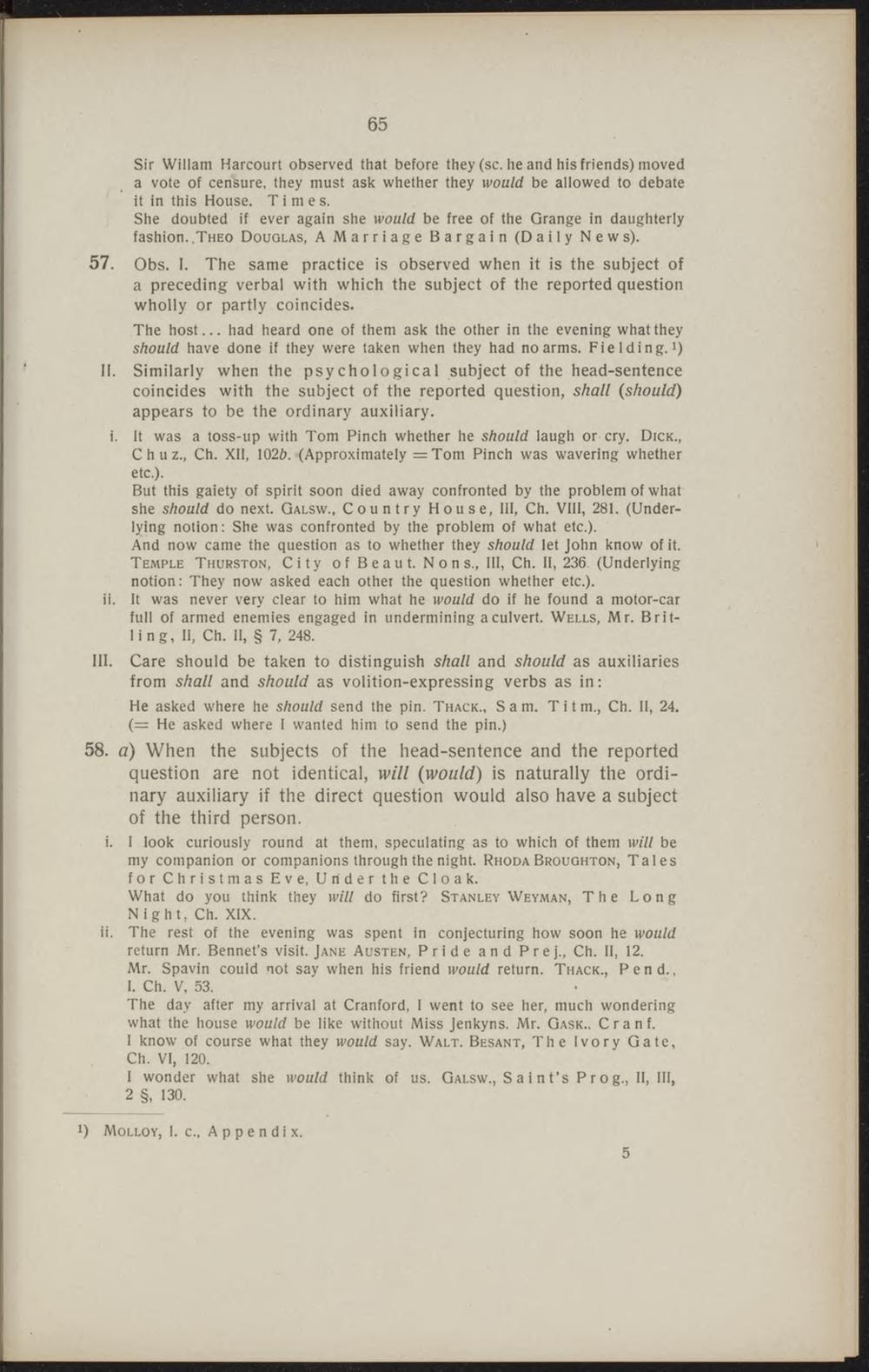 Sir Willam Harcourt observed that before they (sc. he and his friends) moved a vote of censure, they must ask whether they would be allowed to debate it in this House. Times.

She doubted if ever again she would be free of the Grange in daughterly fashion..Theo Douolas, A Marriage Bargaln (Oaily News).

57. Obs. I. The same practice is observed when it is the subject of a preceding verbal with which the subject of the reported question wholly or partly coincides.

The host... had heard one of them ask the other in the evening what they should have done if they were taken when they had noarms. Fielding.1) II. Similarly when the psychological subject of the head-sentence coincides with the subject of the reported question, shall (should) appears to be the ordinary auxiliary. i. It was a toss-up with Tom Pinch whether he should laugh or cry. Dick., Chuz, Ch. XII, 102ö. -(Approximately — Tom Pinch was wavering whether etc).

But this gaiety of spirit soon died away confronted by the problem of what she should do next. Galsw, Country House, III, Ch. VIII, 281. (Underlying notion: She was confronted by the problem of what etc). And now came the question as to whether they should let John know of it. Temple Thurston, City of Beau t. Non s, III, Ch. II, 236. (Underlying notion: They now asked each other the question whether etc), ii. It was never very clear to him what he would do if he found a motor-car full of armed enemies engaged in undermining aculvert. Wells, Mr. Britling, II, Ch. II, § 7, 248.

58. a) When the subjects of the head-sentence and the reported

question are not identical, will (would) is naturally the ordinary auxiliary if the direct question would also have a subject of the third person.

i. I look curiously round at them, specuiating as to which of them will be my companion or companions through the night. Rhoda Broughton, Tal es for Christmas Eve, Under the Cloak.

What do you think they will do first? Stanley Weyman, The Long Night, Ch. XIX.

ii. The rest of the evening was spent in conjecturing how soon he would return Mr. Bennet's visit. Jane Austen, Pride and Prej, Ch. II, 12. Mr. Spavin could not say when his friend would return. Thack, Pend., I. Ch. V, 53.

The day after my arrival at Cranford, I went to see her, much wondering what the house would be like without Miss Jenkyns. Mr. Gask., Cranf. I know of course what they would say. Walt. Besant, The Ivory Gate, Ch. VI, 120.

1 wonder what she would think of us. Galsw, Saint's Prog, II, III,