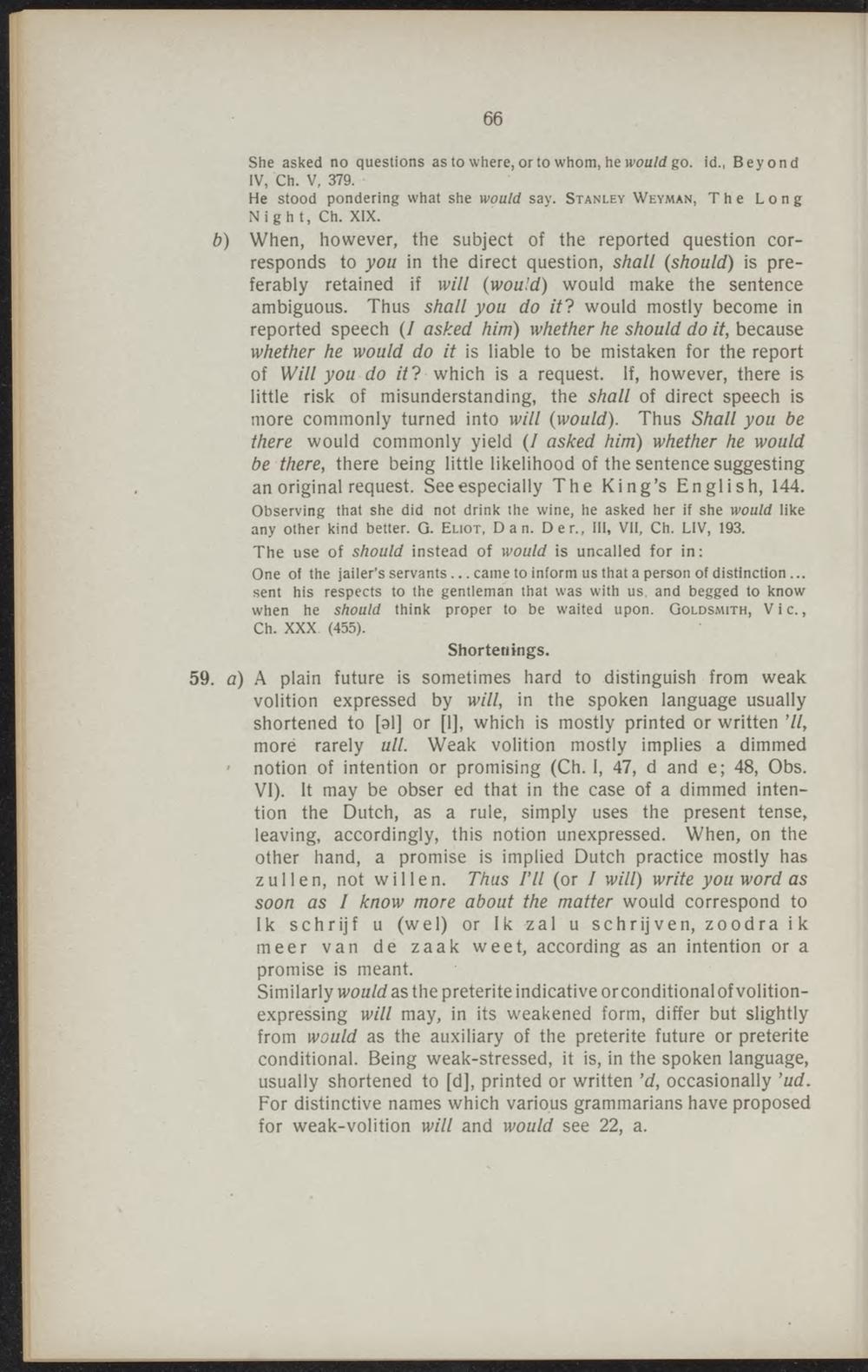 He stood pondering what she would say. Stanley Weyman, The Long Night, Ch. XIX.

b) When, however, the subject of the reported question corresponds to you in the direct question, shall (should) is preferably retained if will (would) would make the sentence ambiguous. Thus shall you do it? would mostly become in reported speech (/ asked him) whether he should do it, because whether he would do it is liable to be mistaken for the report of Will you do it ? which is a request. If, however, there is little risk of misunderstanding, the shall of direct speech is more commonly turned into will (would). Thus Shall you be there would commonly yield (/ asked him) whether he would be there, there being little likelihood of the sentence suggesting anoriginalrequest. Seeespecially The King's English, 144. Observing that she did not drink the wine, he asked her if she would iike any other kind better. G. Eliot, Dan. Der., III, VII, Ch. LIV, 193. The use of should instead of would is uncalled for in: One of the jailer's servants ... came to inform us that a person of distinction... sent his respects to the gentleman that was with us, and begged to know when he should think proper to be waited upon. Goldsmith, Vic., Ch. XXX. (455).

59. a) A plain future is sometimes hard to distinguish from weak volition expressed by will, in the spoken language usually shortened to [al] or [1], which is mostly printed or written '11, moré rarely uil. Weak volition mostly implies a dimmed < notion of intention or promising (Ch. I, 47, d and e; 48, Obs. VI). It may be obser ed that in the case of a dimmed intention the Dutch, as a rule, simply uses the present tense, leaving, accordingly, this notion unexpressed. When, on the other hand, a promise is implied Dutch practice mostly has zullen, not willen. Thus I'll (or / will) write you word as soon as I know more about the matter would correspond to Ik schrijf u (wel) or Ik ^al u schrijven, zoodra ik meer van de zaak weet, according as an intention or a promise is meant.

Similarly would as the preterite indicative orconditionalofvolitionexpressing will may, in its weakened form, differ but slightly from would as the auxiliary of the preterite future or preterite conditional. Being weak-stressed, it is, in the spoken language, usually shortened to [d], printed or written 'd, occasionally 'ud. For distinctive names which various grammarians have proposed for weak-volition will and would see 22, a.