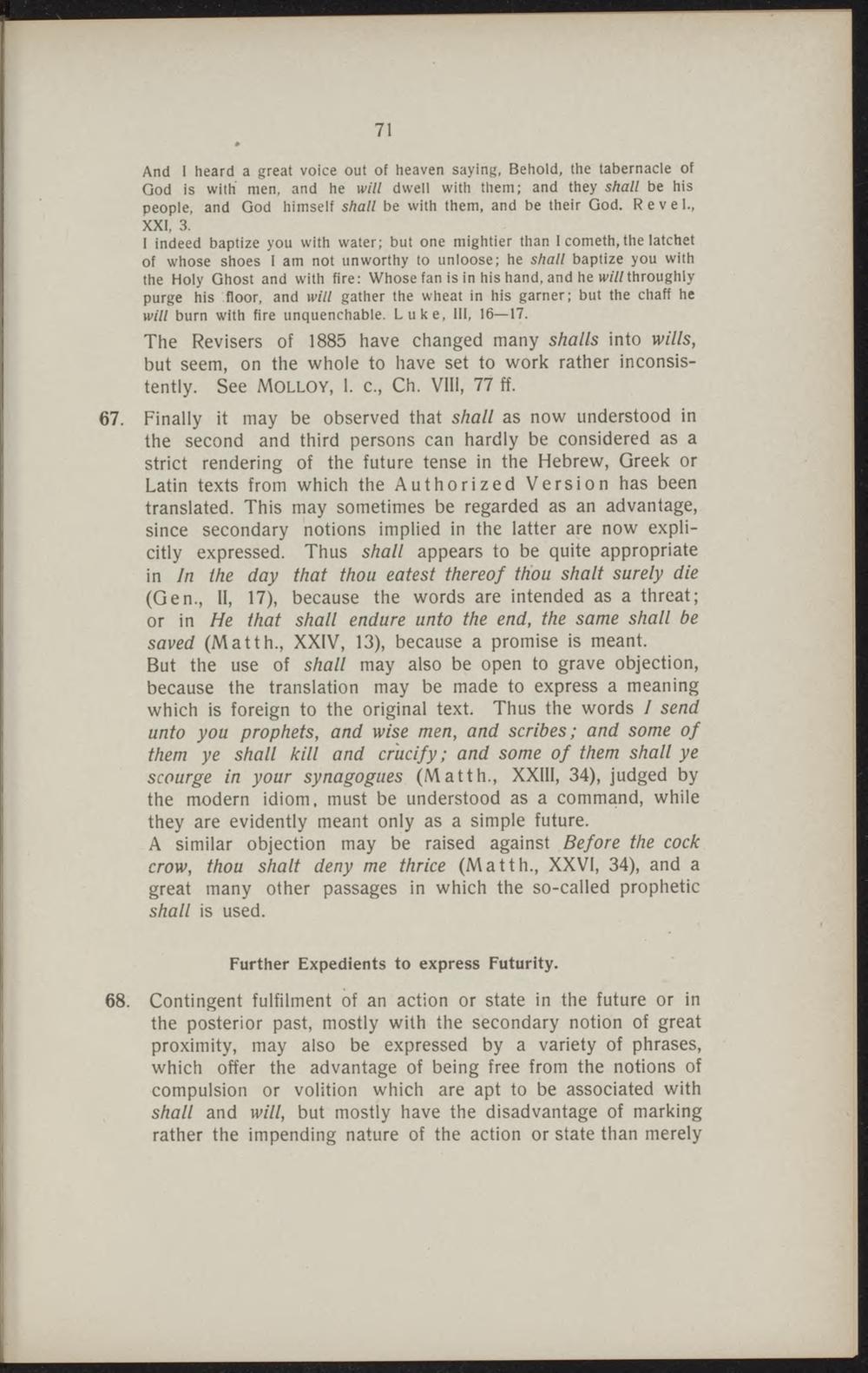 And I heard a great voice out of heaven saying, Behold, the tabernacle of Qod is with' men, and he will dweil with them; and they shall be his people, and God himself shall be with them, and be their God. R e v e 1, XXI, 3.

I indeed baptize you with water; but one mightier than I cometh, the latchet of whose shoes I am not unworthy to unloose; he shall baptize you with the Holy Ghost and with fire: Whose fan is in his hand, and he will throughly purge his 'floor, and will gather the wheat in his garner; but the chaff he will burn with fire unquenchable. Luke, III, 16—17.

The Revisers of 1885 have changed many shalls into wills, but seem, on the whole to have set to work rather inconsistently. See Molloy, 1. c, Ch. VH1, 77 ff.

67. Finally it may be observed that shall as now understood in the second and third persons can hardly be considered as a strict rendering of the future tense in the Hebrew, Greek or Latin texts from which the Authorized Version has been translated. This may sometimes be regarded as an advantage, since secondary notions implied in the latter are now explicitly expressed. Thus shall appears to be quite appropriate in In the day that thou eatest thereof thou shalt surely die (Gen, II, 17), because the words are intended as a threat; or in He that shall endure unto the end, the same shall be saved (Matth, XXIV, 13), because a promise is meant.

But the use of shall may also be open to grave objection, because the translation may be made to express a meaning which is foreign to the original text. Thus the words / send unto you prophets, and wise men, and scribes; and some of them ye shall kill and crucify; and some of them shall ye scourge in your synagogues (Matth, XXIII, 34), judged by the modern idiom, must be understood as a command, while they are evidently meant only as a simple future. A similar objection may be raised against Before the cock crow, thou shalt deny me thrice (Matth, XXVI, 34), and a great many other passages in which the so-called prophetic shall is used.

68. Contingent fulfilment of an action or state in the future or in the posterior past, mostly with the secondary notion of great proximity, may also be expressed by a variety of phrases, which offer the advantage of being free from the notions of compulsion or volition which are apt to be associated with shall and will, but mostly have the disadvantage of marking rather the impending nature of the action or state than merely