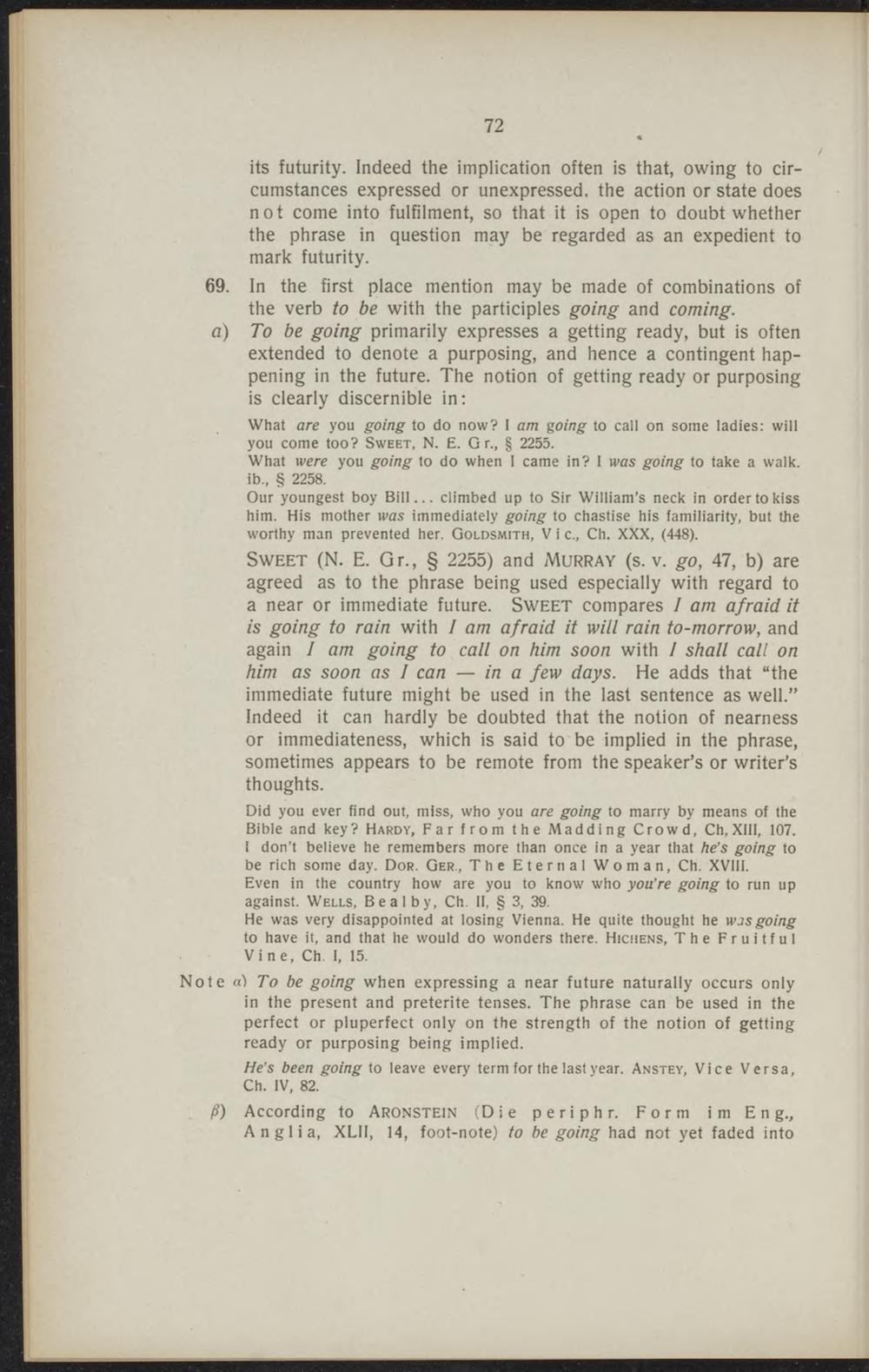 its futurity. Indeed the implication often is that, owing to circumstances expressed or unexpressed, the action or state does not come into fulfilment, so that it is open to doubt whether the phrase in question may be regarded as an expediënt to mark futurity.

69. In the first place mention may be made of combinations of

the verb to be with the participles going and coming, a) To be going primarily expresses a getting ready, but is often extended to denote a purposing, and hence a contingent happening in the future. The notion of getting ready or purposing is clearly discernible in:

Sweet (N. E. Gr., § 2255) and Murray (s. v. go, 47, b) are agreed as to the phrase being used especially with regard to a near or immediate future. Sweet compares / am afraid it is going to rain with / am afraid it will rain to-morrow, and again I am going to call on him soon with / shall call on him as soon as I can — in a few days. He adds that "the immediate future might be used in the last sentence as well." Indeed it can hardly be doubted that the notion of nearness or immediateness, which is said to be implied in the phrase, sometimes appears to be remote from the speaker's or writer's thoughts.

Did you ever find out, miss, who you are going to marry by means of the Bible and key? Hardy, Far from the Madding Crowd, Ch, XIII, 107. I don't believe he remembers more than once in a year that he's going to be rich some day. Dor. Ger, The Eternai Woman, Ch. XVIII. Even in the country how are you to know who you're going to run up against. Wells, B e a 1 b y, Ch. II, § 3, 39

He was very disappointed at iosing Vienna. He quite thought he was going to have it, and that he would do wonders there. Hichens, The Fr ui tf ul Vine, Ch. I, 15.

Note a) To be going when expressing a near future naturally occurs only in the present and preterite tenses. The phrase can be used in the perfect or pluperfect only on the strength of the notion of getting ready or purposing being implied.

He's been going to leave every term for the last year. Anstey, Vice Versa, Ch. IV, 82.

fl) According to Aronstein (Die periphr. Form im Eng, Anglia, XLII, 14, foot-note) to be going had not yet faded into