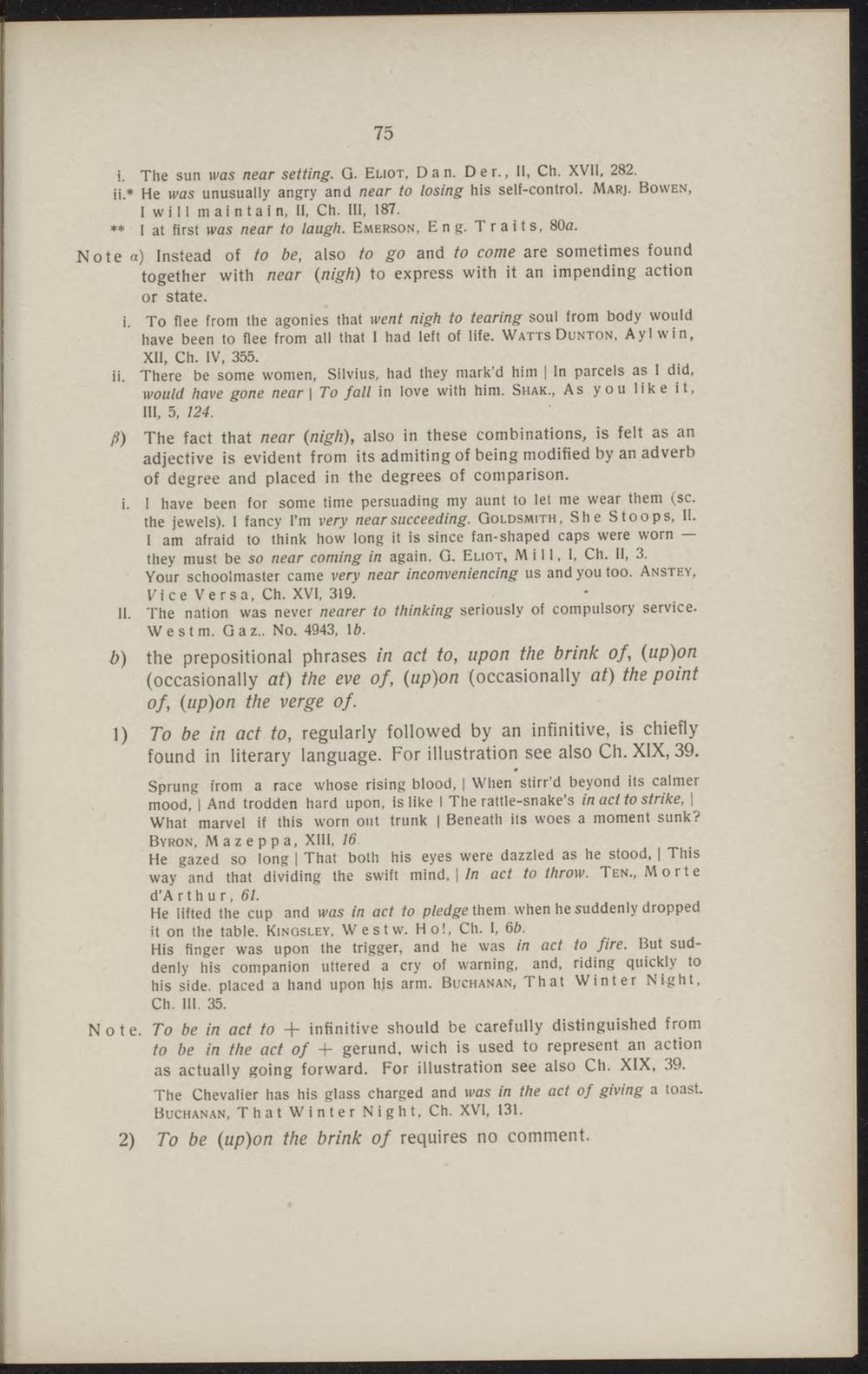 ii. * He was unusually angry and near to losing his self-control. Marj. Bowen,

I will maintain, II, Ch. III, 187. ** I at first was near to laugh. Emerson, Eng. Traits, 80a. Note a) Instead of to be, also to go and to come are sometimes found together with near (nigh) to express with it an impending action or state.

i. To flee from the agonies that went nigh to tearing soul from body would have been to flee from all that 1 had left of life. Watts Dunton, Aylwin, XII, Ch. IV, 355.

B) The fact that near (nigh), also in these combinations, is feit as an

of degree and placed in the degrees of comparison. i. I have been for some time persuading my aunt to let me wear them (sc.

Your schoolmaster came very near inconveniencing us and you too. Anstey,

1) To be in act to, regularly followed by an infinitive, is chiefly found in literary language. For illustration see also Ch. XIX, 39.

Sprung from a race whose rising blood, | When stirr'd beyond its calmer mood, | And trodden hard upon, is like I The rattle-snake's in act to strike, | What marvel if this worn out trunk I Beneath its woes a moment sunk? Byron, Mazeppa, XIII, 16

He gazed so long | That both his eyes were dazzled as he stood, | This way and that dividing the swift mind, | In act to throw. Ten., Morte d'Arthur, 61.

He lifted the cup and was in act to pledge them. when he suddenly dropped it on the table. Kinosley, Westw. Ho!, Ch. I, 66.

His finger was upon the trigger, and he was in act to fire. But suddenly his companion uttered a cry of warning, and, riding quickly to his side. placed a hand upon hjs arm. Buchanan, That Winter Night, Ch. III. 35.

Note. To be in act to + infinitive should be carefully distinguished from to be in the act of + gerund, wich is used to represent an action as actually going forward. For illustration see also Ch. XIX, 39. The Chevalier has his glass charged and was in the act of giving a toast. Buchanan, That Winter Night, Ch. XVI, 131.

2) To be (up)on the brink of requires no comment.