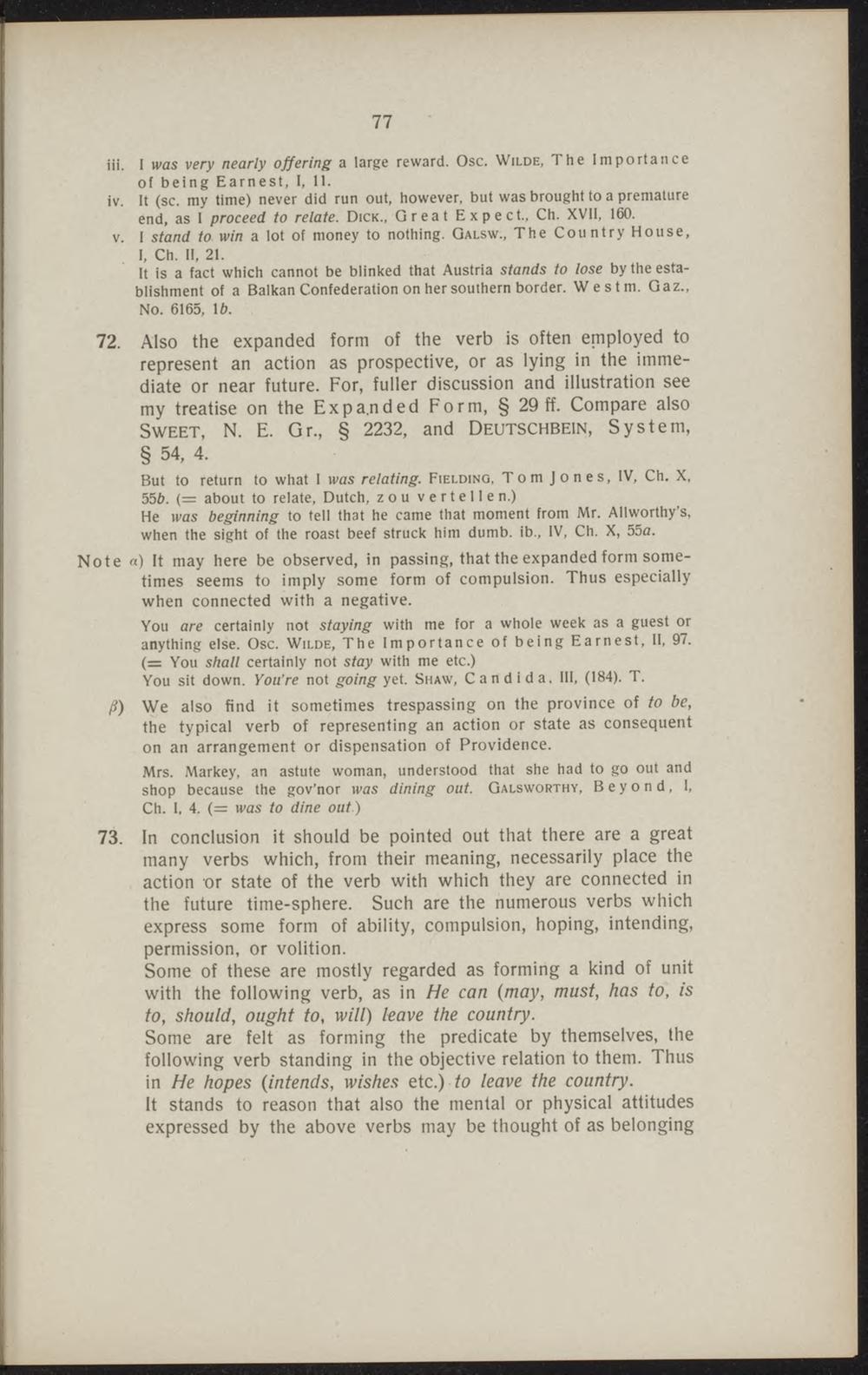 iii. I was very nearly offering a large reward. Osc. Wilde, The Importance of being Earnest, I, 11.

It is a fact which cannot be blinked that Austria stands to lose by the establishment of a Balkan Confederation on her southern border. Westm. Gaz, No. 6165, lö.

72. Also the expanded form of the verb is often employed to represent an action as prospective, or as lying in the immediate or near future. For, fuller discussion and illustration see my treatise on the Expanded Form, § 29 ff. Compare also Sweet, N. E. Gr, § 2232, and Deutschbein, System, § 54, 4.

He was beginning to teil that he came that moment from Mr. Allworthy's, when the sight of the roast beef struck him dumb. ib, IV, Ch. X, 55a. Note a) It may here be observed, in passing, that the expanded form sometimes seems to imply some form of compulsion. Thus especially when connected with a negative.

You are certainly not staying with me for a whole week as a guest or anything else. Osc. Wilde, The Importance of being Earnest, II, 97. (= You shall certainly not stay with me etc.) You sit down. Yoa're not going yet. Shaw, C a n d i d a, III, (184). T. 8) We also find it sometimes trespassing on the province of to be, the typical verb of representing an action or state as consequent on an arrangement or dispensation of Providence. Mrs. Markey, an astute woman, understood that she had to go out and shop because the gov'nor ïvas dining out. Galsworthy, Beyond, I, Ch. I, 4. (= was to dine out.)

73. In conclusion it should be pointed out that there are a great many verbs which, from their meaning, necessarily place the action or state of the verb with which they are connected in the future time-sphere. Such are the numerous verbs which express some form of ability, compulsion, hoping, intending, permission, or volition.

Some of these are mostly regarded as forming a kind of unit with the following verb, as in He can (may, must, has to, is to, should, ought to, will) leave the country. Some are feit as forming the predicate by themselves, the following verb standing in the objective relation to them. Thus in He hopes (intends, wishes etc.) to leave the country. It stands to reason that also the mental or physical attitudes expressed by the above verbs may be thought of as belonging