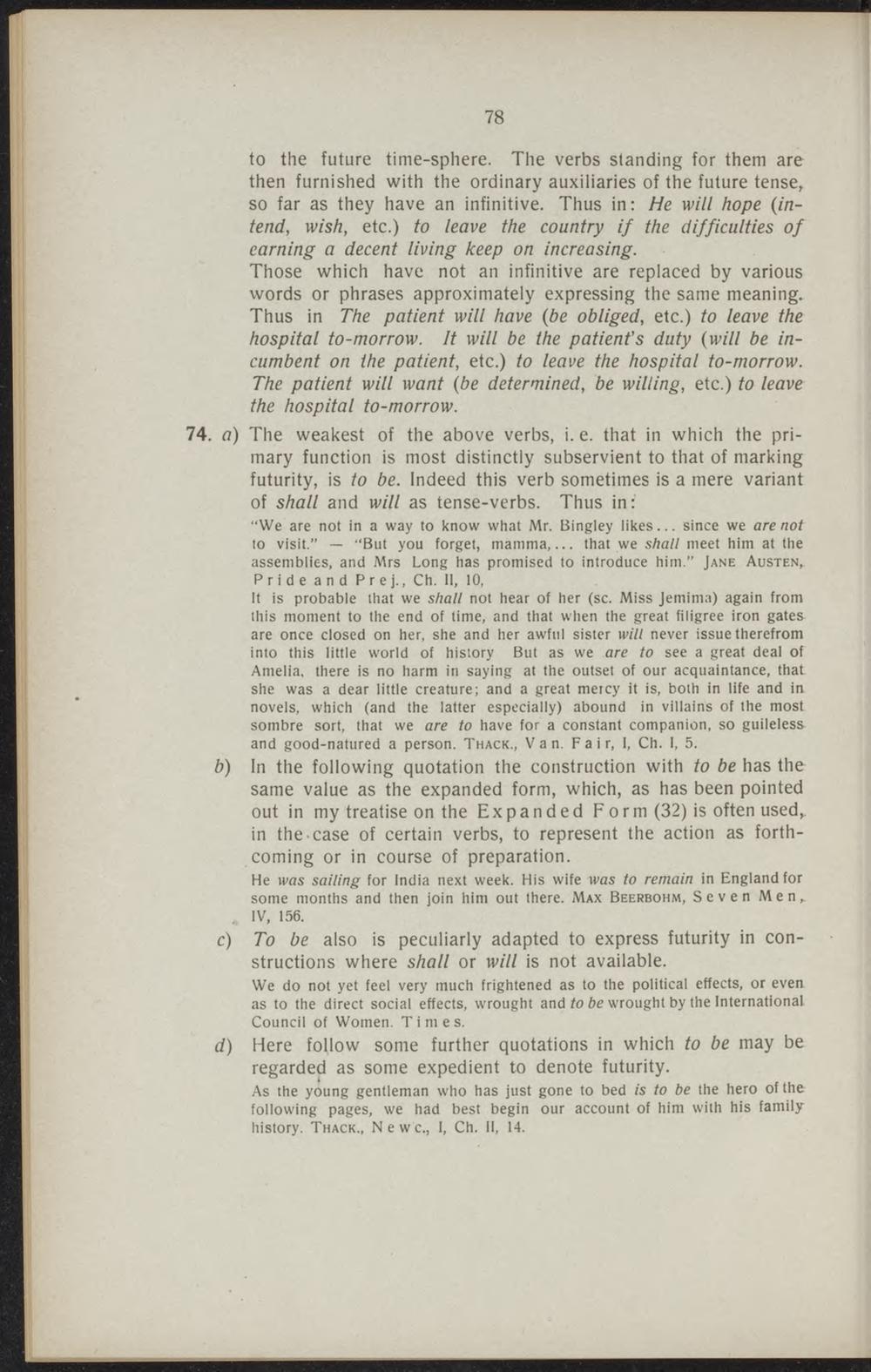 to the future time-sphere. The verbs standing for them are then furnished with the ordinary auxiliaries of the future tense, so far as they have an infinitive. Thus in: He will hope (intend, wish, etc.) to leave the country if the difficulties of earning a decent living keep on increasing. Those which have not an infinitive are replaced by various words or phrases approximately expressing the same meaning. Thus in The patiënt will have (be obliged, etc.) to leave the hospital to-morrow. It will be the patiënt's duty (will be incumbent on the patiënt, etc.) to leave the hospital to-morrow. The patiënt will want (be determined, be willing, etc.) to leave the hospital to-morrow. 74. ö) The weakest of the above verbs, i. e. that in which the primary function is most distinctly subservient to that of marking futurity, is to be. Indeed this verb sometimes is a mere variant of shall and will as tense-verbs. Thus int "We are not in a way to know what Mr. Bingley likes... since we are not to visit." — "But you forget, mamma,... that we shall meet him at the assemblies, and Mrs Long has promised to introducé him." Jane Austen, Pri d e a n d Pr e j., Ch. II, 10,

It is probable that we shall not hear of her (sc. Miss Jemima) again from this moment to the end of time, and that when the great filigree iron gates are once closed on her, she and her awful sister will never issue therefrom into this little world of history But as we are to see a great deal of Amelia, there is no harm in saying at the outset of our acquaintance, that she was a dear little creature; and a great mercy it is, both in life and in novels, which (and the latter especially) abound in villains of the most sombre sort, that we are to have for a constant companion, so guileless and good-natured a person. Thack, Van. Fair, I, Ch. I, 5.

b) In the following quotation the construction with to be has the same value as the expanded form, which, as has been pointed out in my treatise on the Expanded F orm (32) is often used,. in the-case of certain verbs, to represent the action as forthcoming or in course of preparation.

He was sailing for India next week. His wife was to remain in England for some months and then join him out there. Max Beerbohm, Seven Men, , IV, 156,

c) To be also is peculiarly adapted to express futurity in constructions where shall or will is not available.

We do not yet feel very much frightened as to the politica! effects, or even as to the direct social effects, wrought and to be wrought by the International Council of Women. Times.

d) Here follow some further quotations in which to be may be regarded as some expediënt to denote futurity.

As the young gentleman who has just gone to bed is to be the hero of the following pages, we had best begin our account of him with his family history. Thack, N e w c, I, Ch. II, 14.