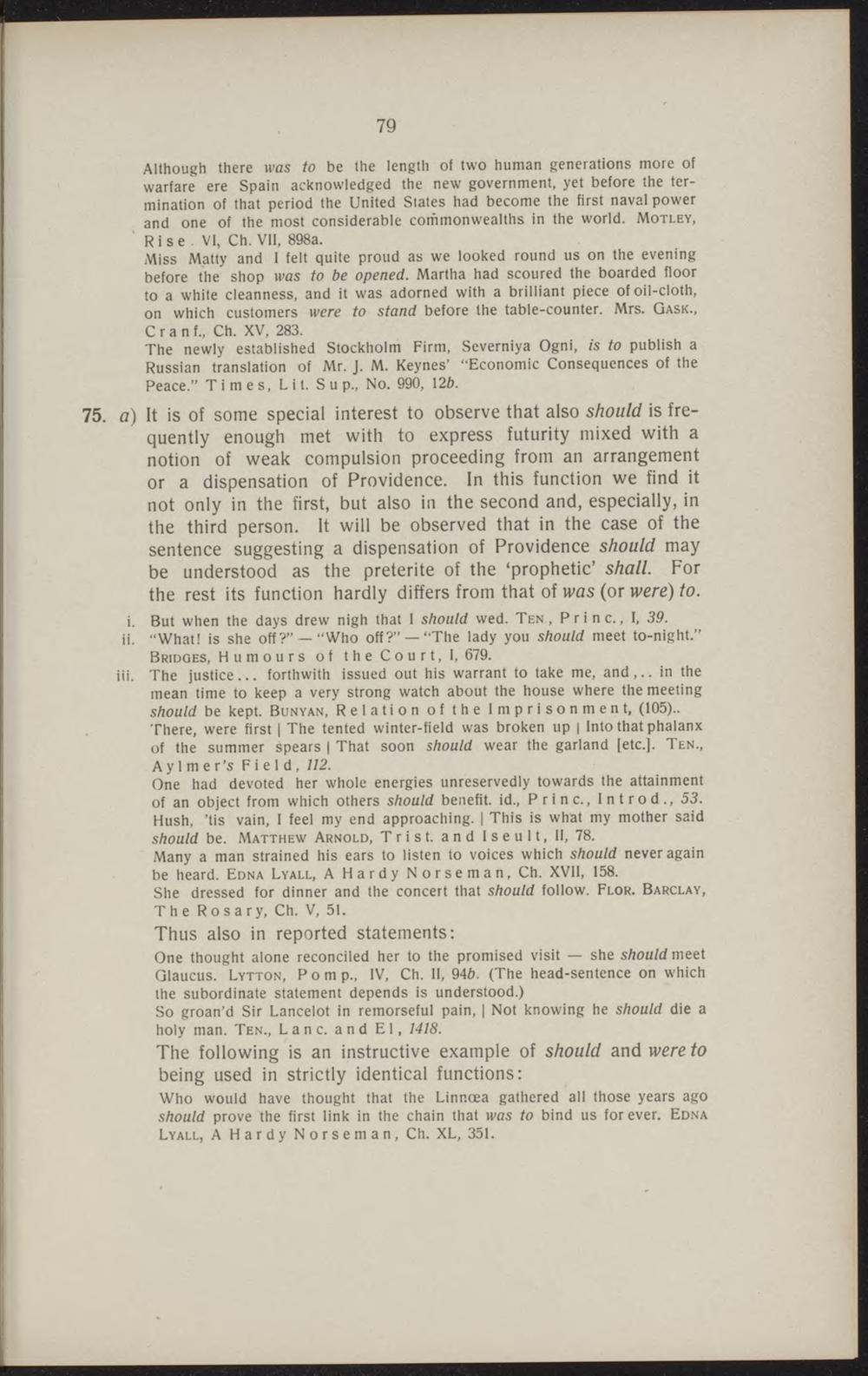 Although there was to be the length of two human generations more of warfare ere Spain acknowledged the new government, yet before the termination of that period the United States had become the first naval power and one of the most considerable commonwealths in the world. Motley, ' Rise . VI, Ch. VII, 898a. Miss Matty and I feit quite proud as we looked round us on the evening before the shop was to be opened. Martha had scoured the boarded floor to a white cleanness, and it was adorned with a brilliant piece ofoil-cloth, on which customers were to stand before the table-counter. Mrs. Gask, Cranf, Ch. XV, 283.

75. a) It is of some special interest to observe that also should is frequently enough met with to express futurity mixed with a notion of weak compulsion proceeding from an arrangement or a dispensation of Providence. In this function we find it not only in the first, but also in the second and, especially, in the third person. It will be observed that in the case of the sentence suggesting a dispensation of Providence should may be understood as the preterite of the 'prophetic' shall. For the rest its function hardly differs from that of was (or were) to.

iii. The justice... forthwith issued out his warrant to take me, and,., in the mean time to keep a very strong watch about the house where the meeting should be kept. Bunyan, Relation of the Imprisonment, (105).. There, were first | The tented winter-field was broken up | Into that phalanx of the summer spears | That soon should wear the garland [etc.]. Ten, Aylmer's Field, 112.

One had devoted her whole energies unreservedly towards the attainment

of an object from which others should benefit, id, Princ, Introd., 53.

Hush, 'tis vain, I feel my end approaching. | This is what my mother said

She dressed for dinner and the concert that should follow. Flor. Barclay,

One thought alone reconciled her to the promised visit — she should meet Glaucus. Lytton, Pomp, IV, Ch. II, 946. (The head-sentence on which the subordinate statement depends is understood.)

So groan'd Sir Lancelot in remorseful pain, | Not knowing he should die a holy man. Ten, Lanc. and El, 1418.

The following is an instructive example of should and were to being used in strictly identical functions:

Who would have thought that the Linncea gathered all those years ago should prove 'the first link in the chain that was to bind us for ever. Edna Lyall, A Hardy Norseman, Ch. XL, 351.