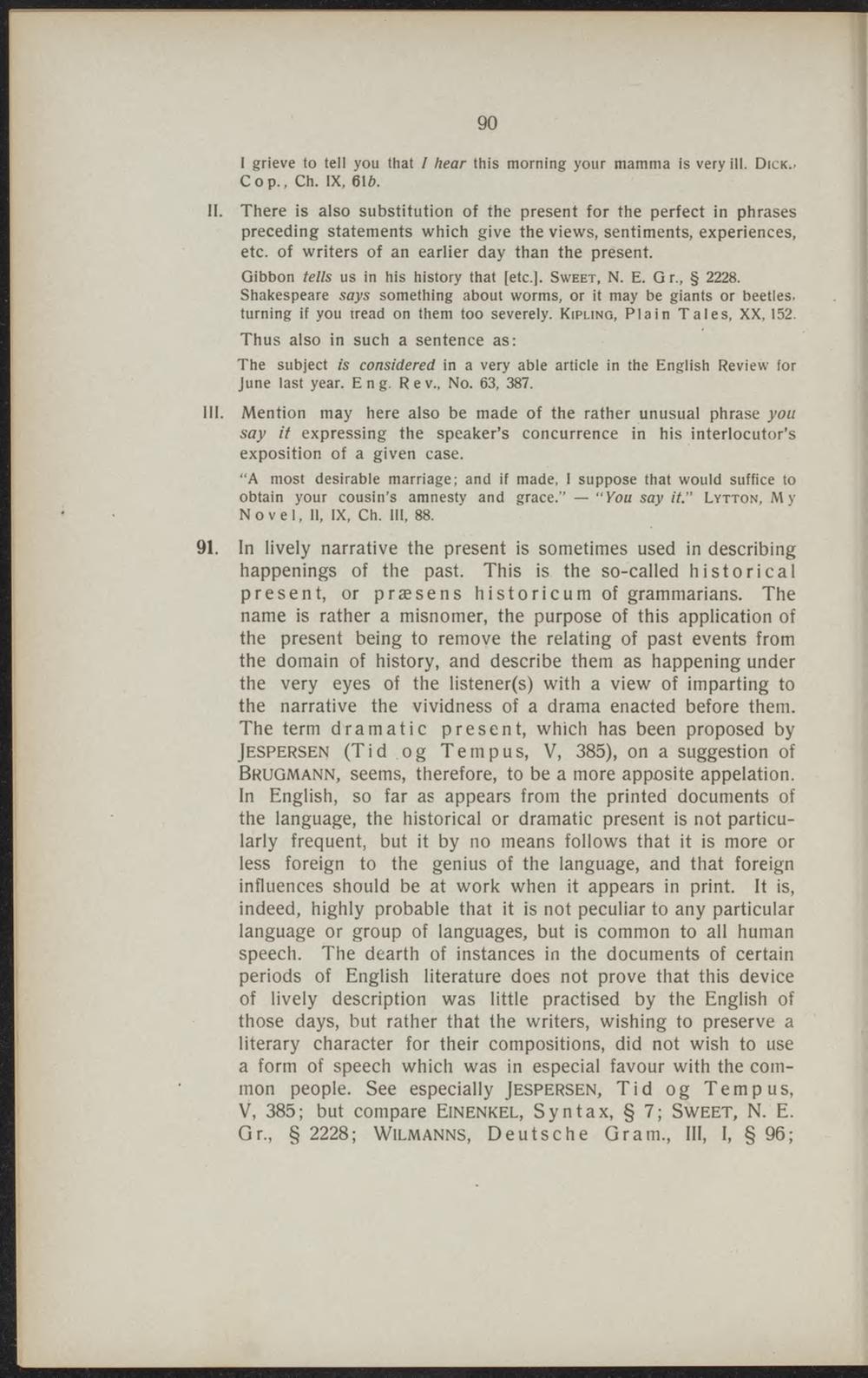 II. There is also substitution of the present for the perfect in phrases preceding statements which give the views, sentiments, experiences, etc. of writers of an earlier day than the present.

Gibbon tells us in his history that [etc], Sweet, N. E. Gr., § 2228. Shakespeare says something about worms, or it may be giants or beetles, turning if you tread on them too severely. Kiplino, Plain Tal es, XX, 152.

Thus also in such a sentence as:

The subject is considered in a very able article in the English Review for June last year. Eng. Rev., No. 63, 387.

III. Mention may here also be made of the rather unusual phrase you say it expressing the speaker's concurrence in his interlocutor's exposition of a given case.

91. In lively narrative the present is sometimes used in describing happenings of the past. This is the so-called historical present, or praesens historicum of grammarians. The name is rather a misnomer, the purpose of this application of the present being to remove the relating of past events from the domain of history, and describe them as happening under the very eyes of the listener(s) with a view of imparting to the narrative the vividness of a drama enacted before them. The term dramatic present, which has been proposed by Jespersen (Tid og Tempus, V, 385), on a suggestion of Brugmann, seems, therefore, to be a more apposite appelation. In English, so far as appears from the printed documents of the language, the historical or dramatic present is not particularly frequent, but it by no means follows that it is more or less foreign to the genius of the language, and that foreign influences should be at work when it appears in print. It is, indeed, highly probable that it is not peculiar to any particular language or group of languages, but is common to all human speech. The dearth of instances in the documents of certain periods of English literature does not prove that this device of lively description was little practised by the English of those days, but rather that the writers, wishing to preserve a literary character for their compositions, did not wish to use a form of speech which was in especial favour with the common people. See especially Jespersen, Tid og Tempus, V, 385; but compare Einenkel, Syntax, § 7; Sweet, n. E. Gr, § 2228; Wilmanns, Deutsche Gram, III, I, §96;