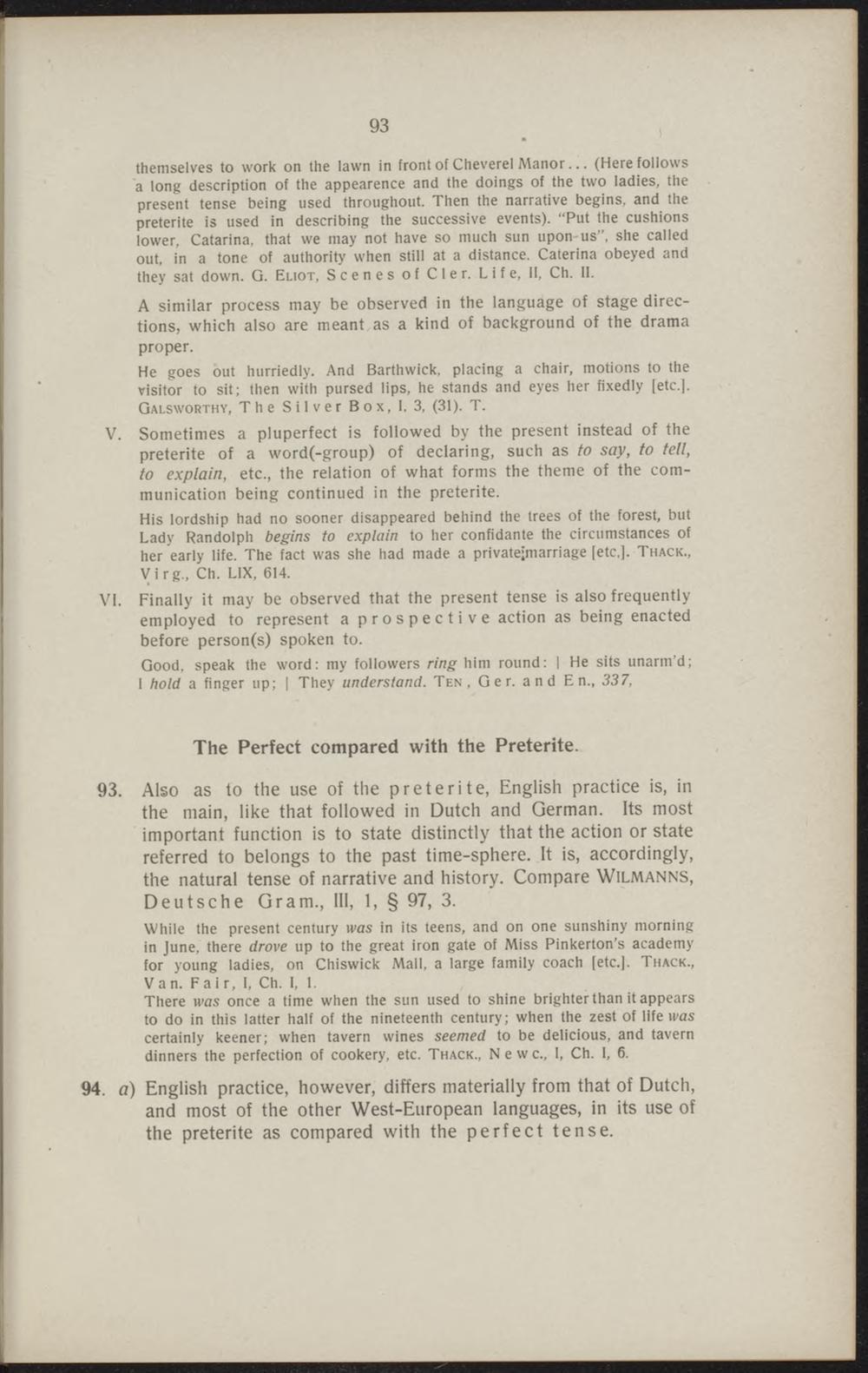 themselves to work on the lawn in front of Cheverel Manor... (Here foliows a long description of the appearence and the doings of the two ladies, the present tense being used throughout. Then the narrative beglns, and the preterite is used in describing the successive events). "Put the cushions lower, Catarina, that we may not have so much sun upon-us", she called out, in a tone of authority when still at a distance. Caterina obeyed and they sat down. G. Eliot, Scènes of C1 er. Life, II, Ch. II.

A similar process may be observed in the language of stage directions, which also are meant,as a kind of background of the drama proper.

He goes out hurriedly. And Barthwick, placing a chair, motions to the visitor to sit; then with pursed lips, he stands and eyes her fixedly [etc.]. Galsworthy, The Silver Box, I. 3, (31). T. V. Sometimes a pluperfect is followed by the present instead of the preterite of a word(-group) of declaring, such as to say, to telt, to explain, etc, the relation of what forms the theme of the communication being continued in the preterite.

His lordship had no sooner disappeared behind the trees of the forest, but Lady Randolph begins to explain to her confidante the circumstances of her early life. The fact was she had made a privatejmarriage [etc,]. Thack, Virg, Ch. LIX, 614. VI. Finally it may be observed that the present tense is also frequently employed to represent a prospective action as being enacted before person(s) spoken to.

The Perfect compared with the Preterite.

93. Also as to the use of the preterite, English practice is, in the main, like that followed in Dutch and German. Its most important function is to state distinctly that the action or state referred to belongs to the past time-sphere. It is, accordingly, the natural tense of narrative and history. Compare Wilmanns, Deutsche Gram, 9, i, § 97, 3.

While the present century was in its teens, and on one sunshiny morning in June, there drove up to the great iron gate of Miss Pinkerton's academy for young ladies, on Chiswick Mali, a large family coach [etc.]. Thack, Van. Fair, i, Ch. i, 1.

There was once a time when the sun used to shine brightef than it appears to do in this latter half of the nineteenth century; when the zest of life was certainly keener; when tavern wines seemed to be delicious, and tavern dinners the perfection of cookery, etc. Thack, n e w c, i, Ch. i, 6.

94. a) English practice, however, differs materially from that of Dutch, and most of the other West-European languages, in its use of the preterite as compared with the perfect tense.