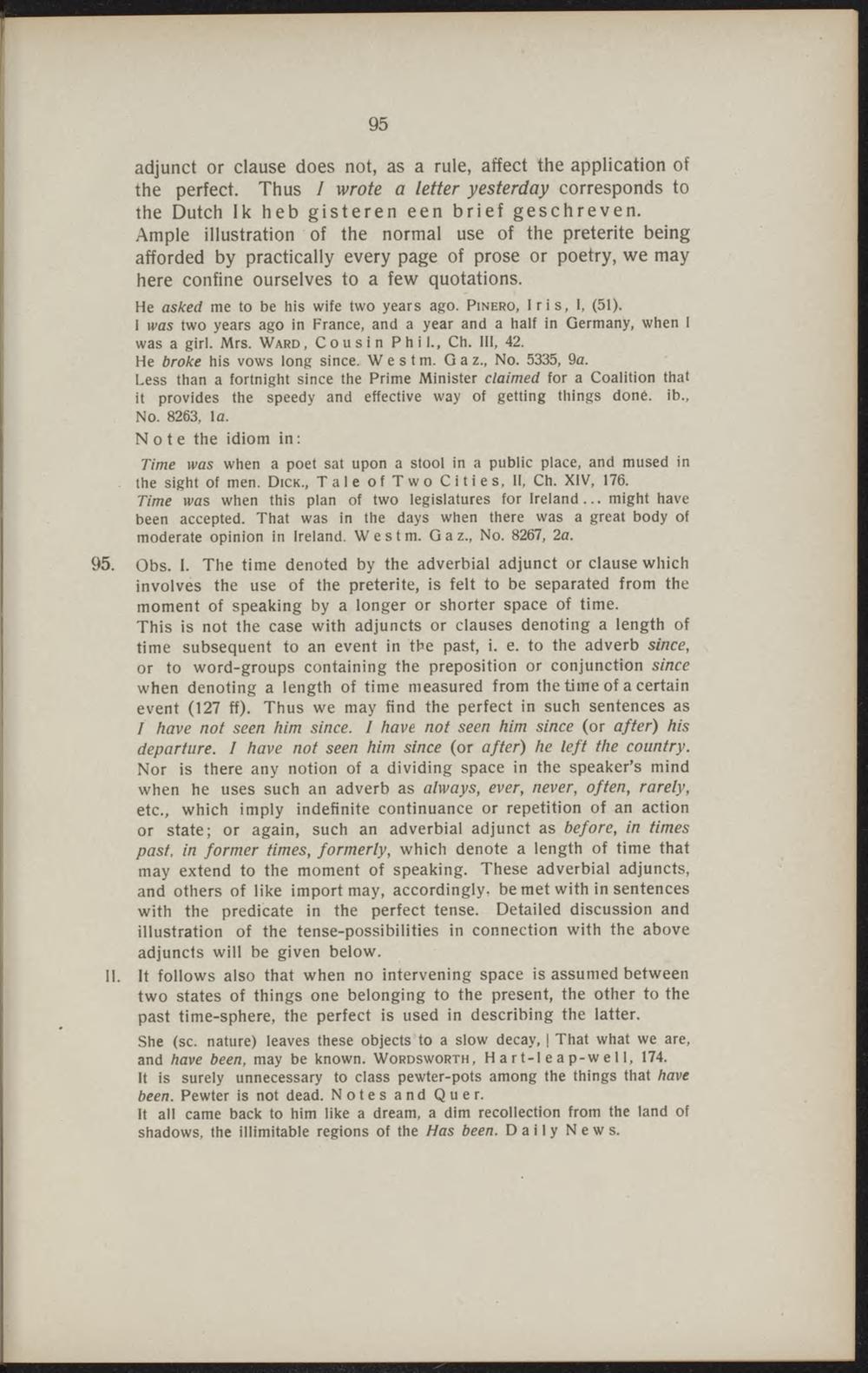 adjunct or clause does not, as a rule, affect the application of the perfect. Thus / wrote a letter yesterday corresponds to the Dutch Ik heb gisteren een brief geschreven. Ample illustration of the normal use of the preterite being afforded by practically every page of prose or poetry, we may here confine ourselves to a few quotations.

I was two years ago in France, and a year and a half in Germany, when I

it provides the speedy and effective way of getting things doné. ib.,

Note the idiom in:

Time was when this plan of two legislatures for Ireland... might have been accepted. That was in the days when there was a great body of moderate opinion in Ireland. Westm. Gaz, No. 8267, 2a.

95. Obs. I. The time denoted by the adverbial adjunct or clause which involves the use of the preterite, is feit to be separated from the moment of speaking by a longer or shorter space of time. This is not the case with adjuncts or clauses denoting a length of time subsequent to an event in the past, i. e. to the adverb s&ice, or to word-groups containing the preposition or conjunction since when denoting a length of time measured from the time of a certain event (127 ff). Thus we may find the perfect in such sentences as / have not seen him since. I have not seen him since (or after) his departure. I have not seen him since (or after) he left the country. Nor is there any notion of a dividing space in the speaker's mind when he uses such an adverb as always, ever, never, often, rarely, etc, which imply indefinite continuance or repetition of an action or state; or again, such an adverbial adjunct as before, in times past, in former times, formerly, which denote a length of time that may extend to the moment of speaking. These adverbial adjuncts, and others of like import may, accordingly, be met with in sentences with the predicate in the perfect tense. Detailed discussion and illustration of the tense-possibilities in connection with the above adjuncts will be given below. It It follows also that when no intervening space is assumed between two states of things one belonging to the present, the other to the past time-sphere, the perfect is used in describing the latter. She (sc. nature) leaves these objects to a slow decay, | That what we are, and have been, may be known. Wordsworth, H ar t-1 e a p-well, 174. It is sureiy unnecessary to class pewter-pots among the things that have been. Pewter is not dead. Notes and Quer.

It all came back to him like a dream, a dim recollection from the land of shadows, the illimitable regions of the Has been. Daily News.