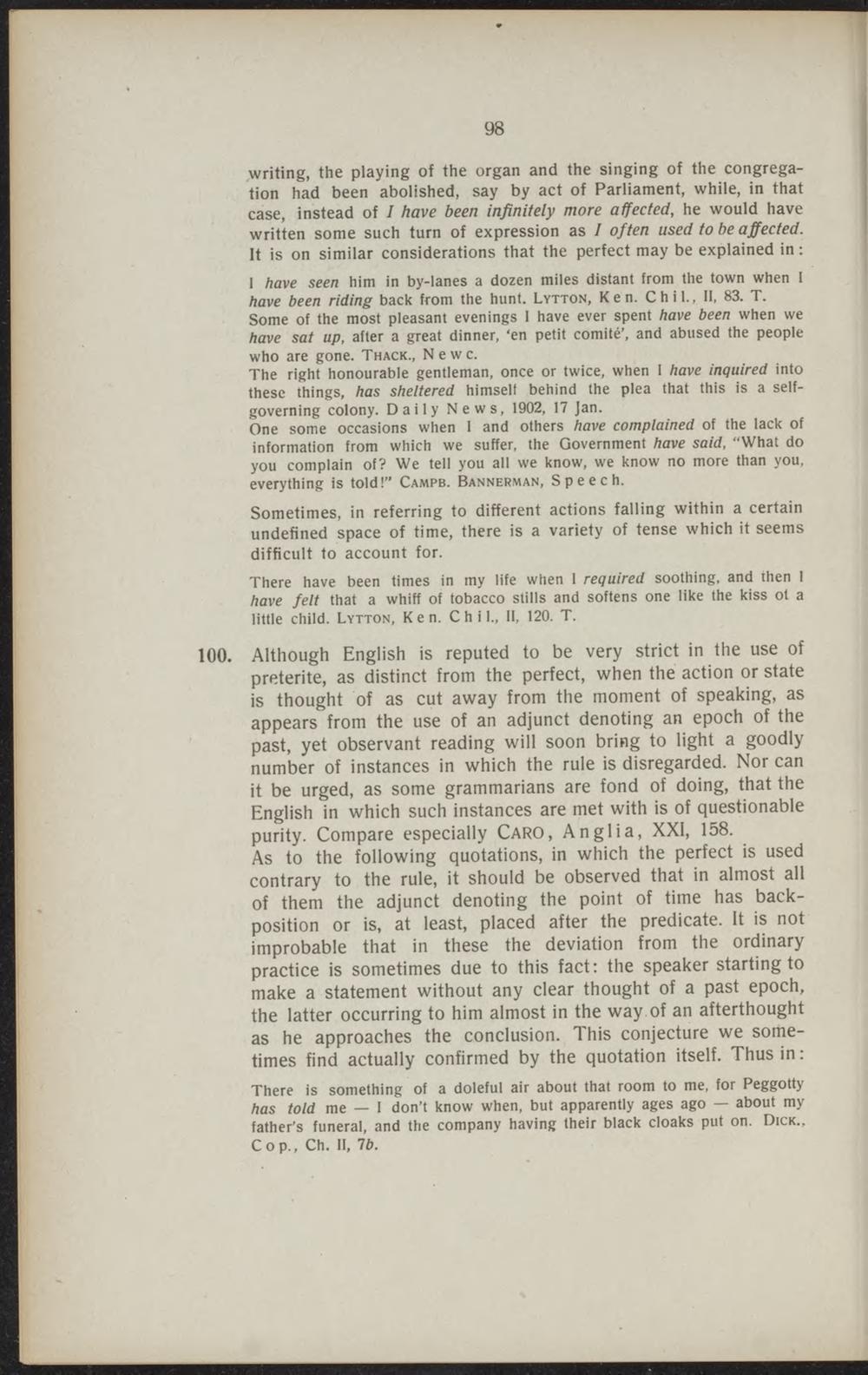 .writing, the playing of the organ and the singing of the congregation had been abolished, say by act of Parliament, while, in that case, instead of I have been infinitely more affected, he would have written some such turn of expression as / often used to be affected. It is on similar considerations that the perfect may be explained in:

I have seen him in by-lanes a dozen miles distant from the town when I have been riding back from the hunt. Lytton, Ken. Chi 1., II, 83. T. Some of the most pleasant evenings I have ever spent have been when we have sat up, after a great dinner, 'en petit comité', and abused the people who are gone. Thack, N e w c.

The right honourable gentleman, once or twice, when I have inquired into these things, has sheltered himself behind the plea that this is a selfgoverning colony. Daily News, 1902, 17 Jan.

One some occasions when I and others have complained of the lack of information from which we suffer, the Government have said, "What do you complain of? We teil you all we know, we know no more than you, everything is told!" Campb. Bannerman, Speech. Sometimes, in referring to different actions falling within a certain undefined space of time, there is a variety of tense which it seems difficult to account for.

There have been times in my life when 1 required soothing, and then I have feit that a whiff of tobacco stills and softens one like the kiss ot a little child. Lytton, Ken. Ch 11, II, 120. T.

100. Although English is reputed to be very strict in the use of preterite, as distinct from the perfect, when the action or state is thought of as cut away from the moment of speaking, as appears from the use of an adjunct denoting an epoch of the past, yet observant reading will soon bring to light a goodly number of instances in which the rule is disregarded. Nor can it be urged, as some grammarians are fond of doing, that the English in which such instances are met with is of questionable purity. Compare especially CARO, Anglia, XXI, 158. As to the following quotations, in which the perfect is used contrary to the rule, it should be observed that in almost all of them the adjunct denoting the point of time has backposition or is, at least, placed after the predicate. It is not improbable that in these the deviation from the ordinary practice is sometimes due to this fact: the speaker starting to make a statement without any clear thought of a past epoch, the latter occurring to him almost in the way.of an afterthought as he approaches the conclusion. This conjecture we sometimes find actually confirmed by the quotation itself. Thus in: There is something of a doleful air about that room to me, for Peggotty has told me — I don't know when, but apparently ages ago — about my father's funeral, and the company having their black cloaks put on. Dick, Cop., Ch. II, 7b.